For the past four months, I’ve been eating whatever I jolly well pleased, under the OBVIOUS assumption that all of the calories were going straight to Noah.

And really, it worked for me.

…for a very short while.

Then I quit losing…and I actually started to gain weight.

But still? The exhaustion of a new baby left me no motivation to do anything but continue a diet of large quantities of chocolate (mostly in the form of Cadbury Mini Eggs) and broccoli.  I had zero inspiration for any type of healthy alternative… unless you consider crashing comatose on the bed after putting all kids to sleep a “healthy alternative”.

But quite randomly, 2 weeks ago, in a flash of inspiration, I decided I was ready.

I told Chris about my weight loss inspiration, and, of course, being the perfect husband that he is, he quickly said I didn’t need to lose weight.

Then, after an acceptable amount of time had passed so that he could not be blamed for insinuating that I indeed needed to lose weight, he suggested that we work out a contest for the two of us to fuel our ridiculously-motivated-by-competition selves.

And, since we’re also insanely-budgety people, we agreed to monetarily reward ourselves at the end of the contest period.

We decided that a per-pound prize would be the most motivating way of going about our reward.

So then it was time to decide what our per-pound rate would be.

Chris said he wanted it to be an odd number so that it sounded like he was for sale in the butcher’s section of the grocery store.

He also suggested that I should get a higher per pound price tag since I had less to lose…which, we decided, also went along with his butcher view. Because we all know that leaner meats are more expensive than “marbled” meats. 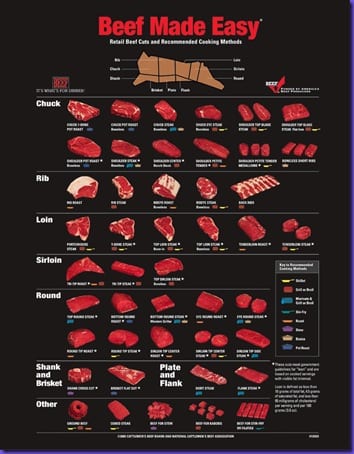 (His word, not mine.  I’d never call my husband marbled…until he did.)

After some geeky heaven of figuring and calculating, we decided on our price tags:

(He sacrificed his desire for uneven numbers for ease in figuring.)

Because we are, after all, complete geeks, the main diet plan AND motivational tool for us is a free iPhone app – Lose It.

(This product is one of a family of consumer items marketed to that niche American subgroup known as NLW, or “Nerds Losing Weight”.)

Along with pretty charts and graphs and lots and lots of numbers, it’s basically a calorie counter program, preloaded with every kind of food, brand, and restaurant.

This was a big step for me, as I’ve spent the last 29 years avoiding knowing the calories in any food product, afraid that the knowledge of how much something cost me in fat cells would surely ruin the taste of everything I hold dear in life.

And it kinda does.

But, again, being a geeky budgety person, knowing that I can BUDGET for my Cadbury Mini Eggs, even though I know how much they cost, makes the knowledge of good and evil not quite so painful.

And, since I’m breastfeeding (and pumping), I got to create those as “exercises”, which also helps make sure that I still eat plenty for said feeding of human being. 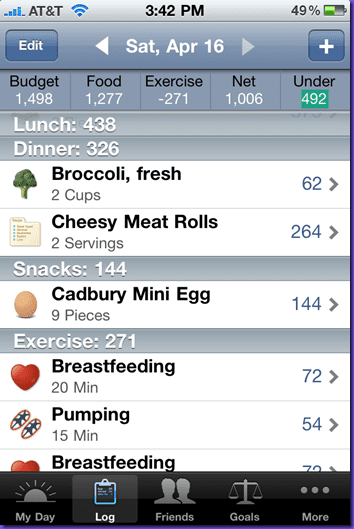 (Isn’t my pumping icon pure awesomeness? I think they’re actually snow shoes, but it looks pretty accurate to me…)

And for the record, now that I have opened Pandora’s calorie box, I’m appalled at how many calories per day I must have formerly consumed.  Shameful.

– I’ve started back juicing occasionally – but only vegetables so far.

– I’ve cut down on sugar and (sob) chocolate.  I’ve actually (and fairly painlessly) gone two entire weeks with less than 30 ounces of Coke – I didn’t make it through many days with less than that before.

– I am not actually exercising yet, but I hope to start (maybe going back to The Shred?) at some point.  Obviously, my exercise plans are still as jell-o-ey as my belly.

– Getting back out the Wii Fit

so that I resume my kicking of Chris’ tail at boxing and hula hooping.  Chris tried it a a few days ago, and it welcomed him back after some 500-ish days away – although it will consider him at death’s door until his weight is a government-BMI-approved 49 pounds or so.

(And I’m REALLY wishing I’d weighed in a 40 weeks pregnant so that I could see that stupid-trainer-thingy jump up and down with unbridled glee at my miraculous weight loss.)

But the calorie counting alone is already making a huge difference.  We started two weeks ago, and we’ve already lost 8 pounds each.

…Which means I was consuming approximately three pounds of chocolate a week.  Or something like that.

So bring it on. Anybody else on a weight loss kick?  Any good strategies for calorie-cutting or fat-burning?  And wanna be our friends on Lose It?

Disclaimer: Neither chocolate nor broccoli, Cadbury Mini Eggs nor marbled beef, juicers nor Lose it nor The Shred nor Wii Fit nor my husband requested to be reviewed in or compensated me for this post.  Although this post is, for purposes of full disclosure approved by said husband.

an update on our diet plan can be found here.

58 thoughts on “How Geeks Lose Weight.”