Last week, I conducted a survey on the crucial subject of Chick Cars.

Between blog comments, Facebook, Twitter, and in-person interviews, I collected vast amounts of data on this subject.

In sorting out this influx of information, I determined to do more than simply look at the numbers.  Because I have a heart for the people, and the people need this information.

And in so doing, I discovered many important facts.

FACT #1: Women are very judgmental about what men choose to drive.

Although before this study many women have kept their opinions largely to themselves, it must be noted that ladies have surprisingly strong, concrete opinions regarding the types of automobiles that men should and should not drive.

And, oddly enough, ladies seem to be in agreement with one another, as if we all convene once a year to determine how we feel about these crucial matters of manliness.

FACT #2: Many men seem indifferent, aloof, and possibly even in denial about the specifications of Chick Cars.

For example: 100% of women agreed that Mazda Miatas are chick cars.  Yet only 40% of men were aware that these were, indeed, chick cars.

…and some men were even unconvinced that Mini Coopers are Chick Cars.

Without a doubt, Men are utterly deficient in this vital area of education.

FACT #3: Women can drive whatever they want and get away with it.  Men cannot.

As with most things in life, there is a double standard between the sexes.

FACT #4: The repercussions of combining Fact #2 and Fact #3 demand that men should be paying very close attention to the data in this report.

So let’s move on to the findings, which will be broken d0wn into three parts:

Many car models evoked a very passionate response from the survey respondents (in both the Chick and the Dude direction), whereas others were only mentioned by a select few survey responders.  In this first informational graph, I focused on the oft-mentioned cars.

In the Chick Car Index, the higher the number, the more Chickliness a car possesses: 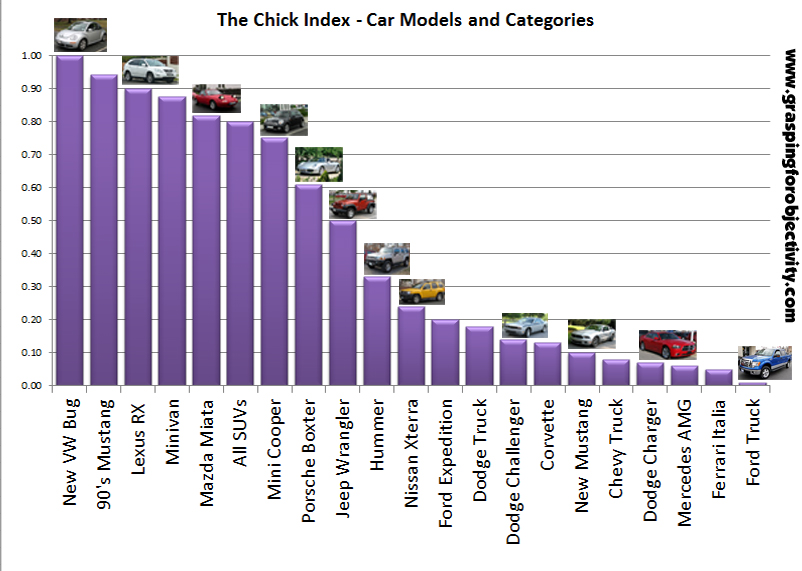 There was no contest for the title of Queen of the Chick Cars: The New VW Beetle.  It got zero Dudeliness votes – not even from the In-Denial guys.

So if you’re a man reading this post at a stoplight while sitting in your VW Beetle and adjusting your My Little Pony steering wheel cover, you might want to make an illegal U-Turn and head straight to a dealership.

The Minivan also got many votes, but it’s index was skewed by a single “androgynous” vote – most likely from a new minivan acquisitioner desperately hoping to make it cool for her husband’s sake.

As previously mentioned, the Miata and the Mini Cooper were overwhelmingly voted as Chick Cars from women, but a few men held out that they were not indeed Chick Cars.

But let’s face it, men: If all women think they’re Chick Cars, then they are indeed, by definition, Chick Cars.

Because although women may dress for other women, men clearly drive for women.

The most controversial cars were the Porsche Boxster and the Jeep Wrangler.  Therefore, I cannot guarantee that these are safe choices – only that approximately half the population of the universe will appraise you as a Chick-Car-Driver.

Although trucks were generally lauded as Dude Cars, it should be noted that two exceptions were the Chevy Avalanche and the Honda Ridgeline.

Apparently, unnecessary curvature between the cab and the bed looks exceedingly womanly.

It quickly became clear that some car manufacturers lean more heavily to the creation of Chick Cars than others.  Although these are not across the board for all models (except for Volkswagen), this is a good indicator of the chances of a particular model being ChickPossible: 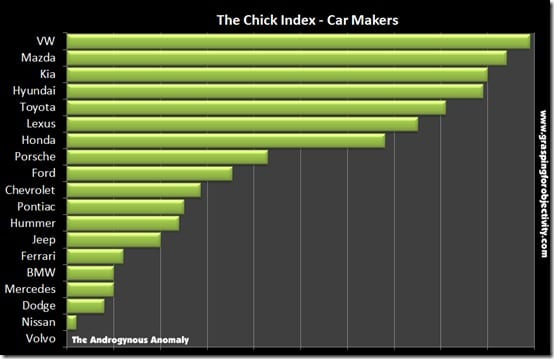 An important note must be made regarding Volvo: it was unanimously cited as being an androgynous brand.  Not Chick, not Dude.  Just…leaving everyone confused.

3. Attributes that Define a Chick Car.

It should be noted that the path to Dudeliness is narrow.  Very narrow.  Using the survey data, I was able to extrapolate key features that define a car by type.  I took this data and applied it to the top 100 car models.  The results speak for themselves: 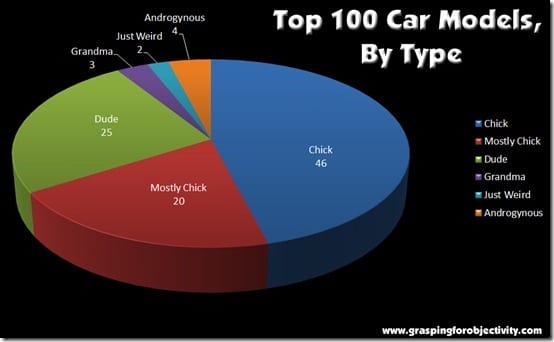 Only 25% of the top brands are actually Dude Cars.  And we know that the percentage of men purchasing cars is higher than that.  So men, take care to pay close attention to these attributes of Gender-Appropriateness:

Yes, men – you read that right.  If you want to ensure that you’re driving a Male-Appropriate vehicle, trade in that baby blue VW convertible for an ugly-as-Mick-Jagger 1978 John Deere with the biggest, loudest engine you can find.

43 thoughts on “Chick Cars: The Report.”