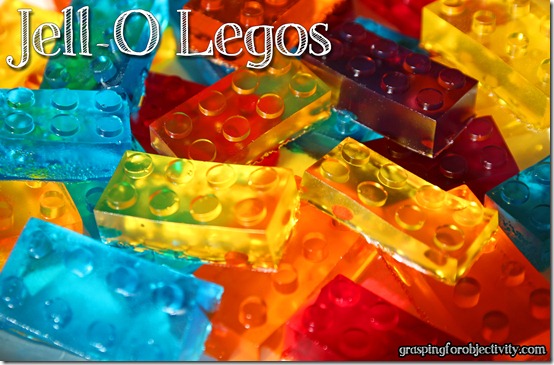 Even Noah has been bitten by the bug, which is bringing Chris’ life dreams into complete fulfillment.

As such, when I ran across Lego Ice Cube Trays on Amazon, I knew I had to get them. I found the actual Lego branded tray, and a set of non-Lego brand tray (which creates slightly larger blocks,) and a non-Lego brand minifigure tray.

So I bought them all.

They were the flexible silicon kind of mold, so I also knew that they would be much fun for creating all sorts of Lego-themed treats.

(Except for Cake Pops. I will never attempt Cake Pops again, no matter how much it would please my family.)

Our first foray into the world of edible Legos was Jell-O.

(I had pinned the “How to make Jell-O Legos by pouring them into the bricks” forever ago, but I never could figure out how you were supposed to get them out of the hard bricks.)

I wanted a fun school craft for Valentine’s Day, and this was the perfect project, even though it has nothing to do with Valentine’s.

(I struggle with cohesion, just like certain Project Runway teams.)

It took me a while to find a good Jell-O Jiggler recipe that would work for one box (most were written for three boxes of Jell-O, but I really wanted to do one box at a time to get a variety of colors.) But when I did find one, it was amazingly simple:

1 cup of boiling water
1 packet of Knox Gelatine (is “gelatine” a Canadian spelling? But that’s what the package says…)
1 box of Jell-O

Somehow the creating of Jell-O was much simpler than I remembered it from my childhood (yes, this is the first time I’ve ever made it with Ali) – it seemed to take so much longer when I was shorter.

We quickly boiled the water, mixed in the Knox and Jell-O, and put the concoction into a measuring cup for Ali to pour into the molds: 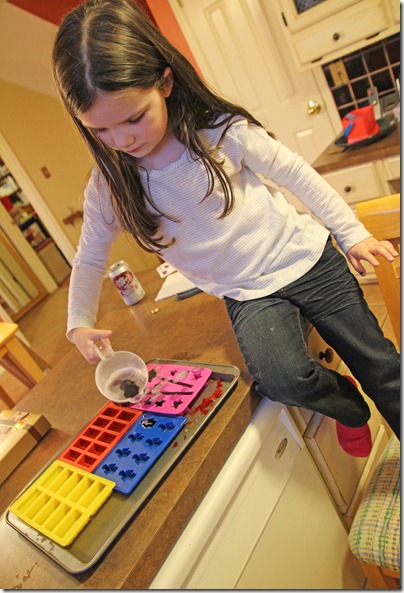 The only tip that we did discover was that they turned out prettiest if we could minimize the bubbles in the mixture, so very light whisking was in order. You can see in this picture that the Mr. Purple Minifig has a bit of a bubbly gut: 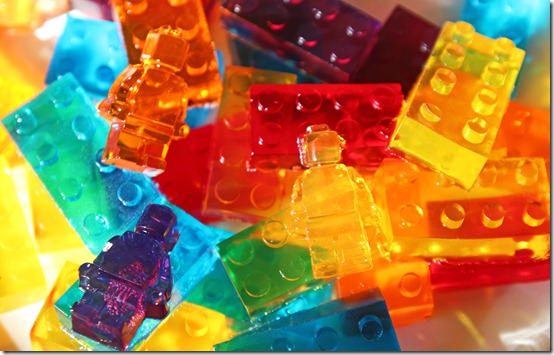 (He needs some Lego Jell-O Bean-O.)

But other than that, it couldn’t have been easier.

We let our molds refrigerate for a couple of hours, and when we removed them, we pulled at the edges of the silicone mold and popped them out from the bottom. Most of them came out immediately, leaving no shrapnel behind. 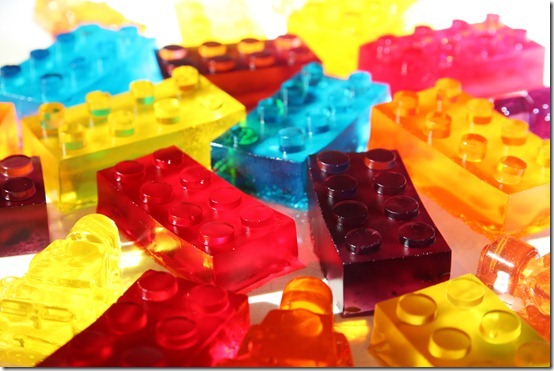 (This recipe would also work fabulously if, perhaps, you own a set of Naked Baby Moulds. Maybe use Peach-Flavored Jell-O to give it a nice flesh tone…)

We ended up doing six colors – two in the morning, two at lunch, and two at dinner. Each round took at most ten minutes. 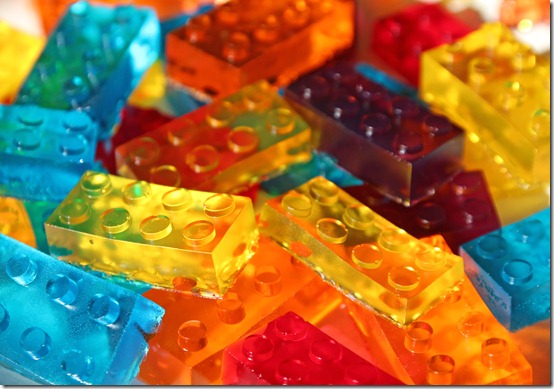 The Minifigures added a lot of charm, and I would love to find molds of other Lego brick sizes and shapes to add to our collection. 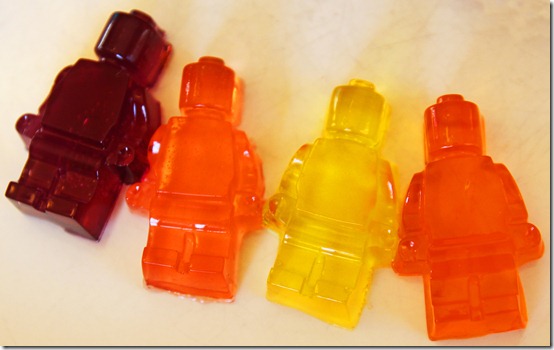 (Or get really geeky and create my own molds.)

I’m glad I had all three molds (and an extra star wand mold,) because it was just a little shy of holding two batches at once. We poured the extra Jell-O into a pan, on which we used non-cohesive random holiday cookie cutters.

Ali is already asking me what we can make next. She wants to try molding Soft Butter Mints into Legos, and I want to make some Mommy-Therapy-Chocolates.

What else can we make?