A few months ago, My Dad was tossing around the idea of buying an old(ish) sports car.

(Clearly, something very unhealthy was in our family’s air during the month of May.)

He was planning a Grand 40th Anniversary Adventure with my Mom – something really spectacular – and he needed to right car to set it off.

(By the way – he is also blogging about their adventure here – you should follow him.  You’ll be glad you did.)

On the first iteration of this plan, he informed me that he was thinking about getting a Mazda Miata.

“How can you not know this?? You’re the epitome of a car guy.  Miatas are total Chick Cars.”

“Really?  I’ve never thought of them as a Chick Car.”

“Have you SEEN her with her eyes open??” 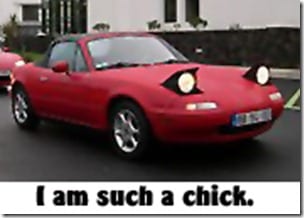 “Well, I think they’re great! And besides, our Pastor drives one.  Is his a Chick Car?”

“Well, his has all sorts of racing edition stuff on it, and a really revved-up engine.  And it’s a newer model, which really helps.  And he kinda gets a pass because he has a history with Miatas.  So…not entirely.”

(Please – no one send a link of this post to my Pastor.  And if his wife is reading, let’s just keep this our secret.)

I troubled my Dad’s soul more than I realized.  The next time I saw him, he said,

“So I’m thinking about getting a Mustang.  Is that a Chick Car?”

“What happened to the Miata?”

“Well, you happened to it.  So what about the Mustang?”

I actually did feel guilty about popping my Dad’s Miata Bubble.  But every time I saw a dude driving around in one or folding himself into the driver’s seat, I found myself giggling on the inside.  I felt better about the fate from which I saved my Father.

And then, as I was bearing my MiataGuilt to some of my friends, they told me about the “Yes, Dear” episode that was all about the Miata being a Chick Car.  And if I needed any more evidence, the Miata is the main Chick Car referenced on Urban Dictionary.

Yes, I had truly been a helper.

So I decided that it was high time for a Chick Car Index to be created – you know, to help more people make informed buying decisions.

But if I just made the judgments on my own, they certainly wouldn’t be scientific, and I’d have all sorts of haters leave nasty comments.

Because if people can get all worked up about jeans (and believe me they do), then how much more angry could they get about the supposed gender of their car?

So I decided to crowdsource the blame.  An official survey was in order.

With the weightiness of this information in mind, it is critically imperative that you answer these questions as soon as possible.  Please feel free to have your husbands, brothers, mothers, and third cousins twice removed weigh in as well.

1. What cars do you consider to be Chick Cars?

2. What cars do you consider to be Dude Cars?

3. What cars are completely androgynous?

And If you’ve never considered the gender of car models, the time is now, people.  Start pondering.

I’ll compile my opinions with yours in a complete geeked-out graphed-up scientific study.

Oh – and by the way.  My Dad’s final choice of car for their Grand Anniversary Adventure? 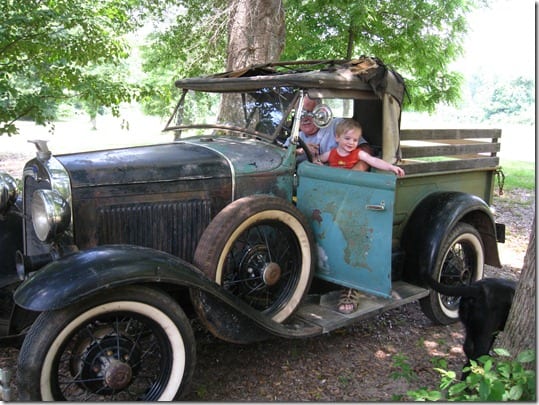 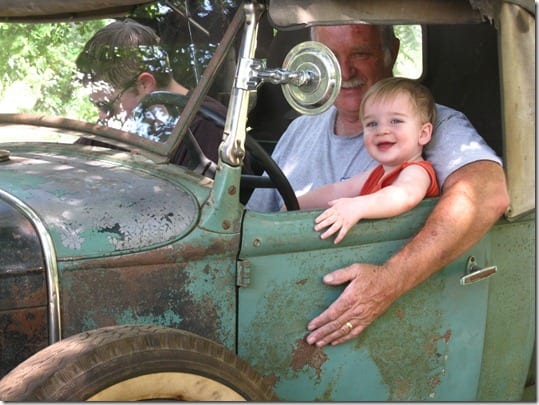 That, my friends, is no Chick Car.

I am awaiting with open spreadsheet for your Chick Car votes.  And better yet, weigh in on each other’s votes as well (with much respect and southern charm please) so that we’re all talking about the same cars.

You could be contributing to a study that could upturn the car industry, so consider your choices vigilantly.

63 thoughts on “The Scientific Study of Chick Cars.”