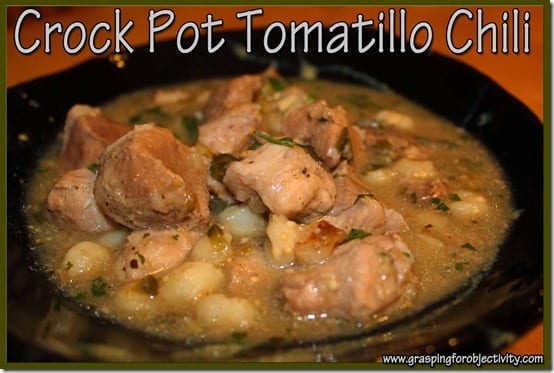 I made it three weeks ago and have craved it ever since.  If I can make it through writing this post without tossing down my computer, running to the store, and turning on the crock pot, it’s going to be a miracle.

And I owe it all to you guys.

Yup – if it weren’t for you, I would have never found this recipe.

When I blogged about my roast angsts a few weeks back, several of you offered great advice.  And, in particular, both Holly and Chelle recommended the cookbook Slow Cooker Revolution

by America’s Test Kitchen.  I Amazoned it: 200 thoroughly tested Crock-Pot recipes from a completely unbiased test kitchen (The Consumer Reports of cooking).  It sounded fascinating, so I ordered it immediately.

And I was not disappointed.

I spent a long morning sitting by the baby pool drooling on all the photos and post-it-note flagging every other recipe, but there was one recipe that I knew was absolutely meant for me.

Tomatillo Chili with Pork and Hominy.

I have a slight obsession with Tomatillos, but rarely see any recipes calling for them other than salsas.  And I love chili.  Plus, cilantro!  And even though it listed two items that I wasn’t even sure what they were (hominy and tapioca), I managed to find them with only a little bit of humiliating grocery store ignorance.

One disclaimer: This is not a toss-it-all-into-the-slow-cooker in three minutes type of recipe – it needs about 30 minutes of prep time.  So if you’re looking for a zero prep meal, this isn’t it.  But if you’re looking for THE BEST THING YOU EVER ATE OUT OF A CROCK-POT, this is most absolutely it.

So, here’s the recipe.

(And yes, I did get permission from America’s Test Kitchen to share this.  Thanks, guys!)

Put an oven rack 6 inches from your broiler element, set your oven on broil.

I already mentioned the husking, stemming, rinsing, drying and halving of tomatillos.  If you’re not sure what they are, they’re kinda hybrids between tomatoes and peppers: 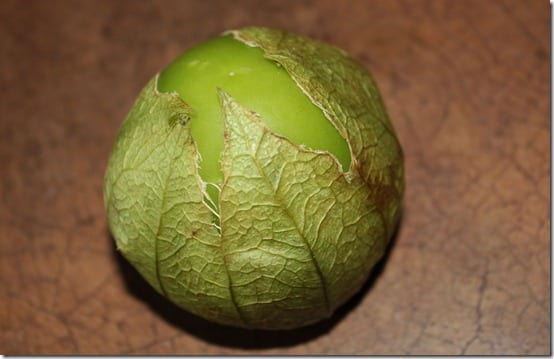 Husking them can be very copacetic, and also creates a pretty pile of Tinkerbell outfits.  Bonus! 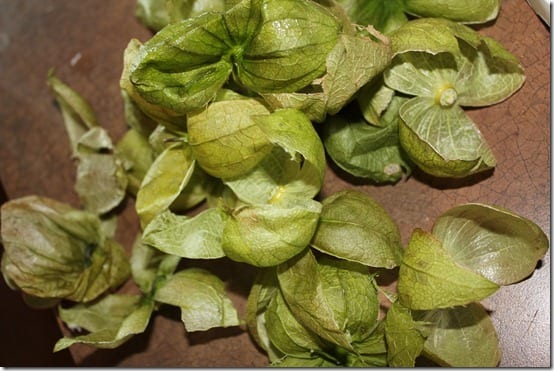 So.  Toss the tomatillos with the onions, garlic, oregano, cumin, cloves, cinnamon, and oil. 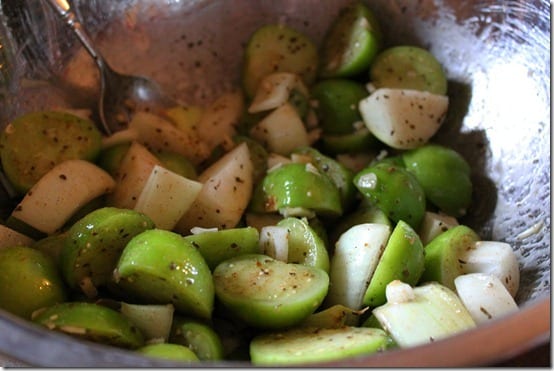 Spread them onto an aluminum-foil lined baking sheet, and broil them until the vegetables are blackened and begin to soften (around 10 minutes).  Rotate the pan halfway through broiling. 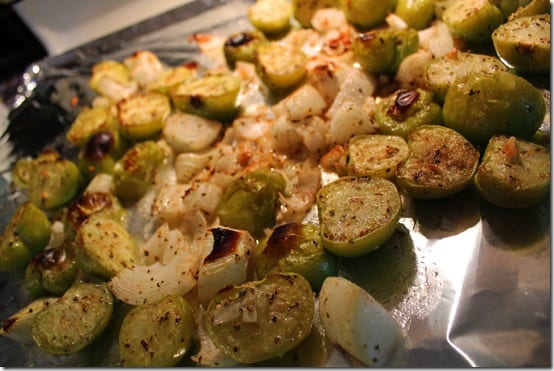 Let the vegetables cool slightly, then pulse them, along with their juices, in the food processor until almost smooth.  Dump into your slow cooker.

Next it’s time for mystery ingredient number one, hominy.  I’m still not sure exactly what it is, but according to Wikipedia, it’s definition is “dried maize kernels which have been treated with an alkali in a process called nixtamalization.”

At any rate, this is what hominy looks like: 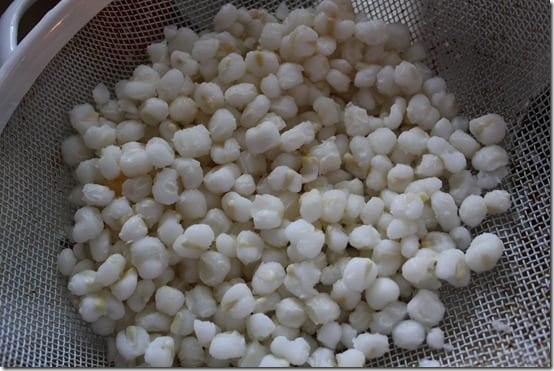 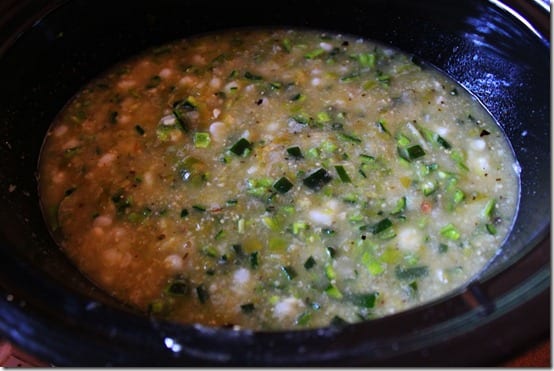 (By the way, Wikipedia has an explanation for tapioca, too: it’s “a starch extracted from cassava.”  This is turning into the most educational recipe ever.)

Season the pork with salt and pepper, and nestle (yes! The recipe actually says “nestle!”) into slow cooker. 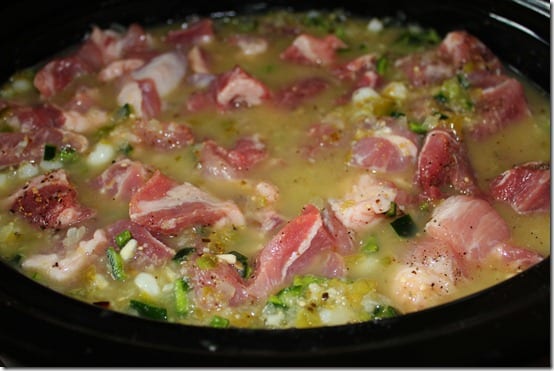 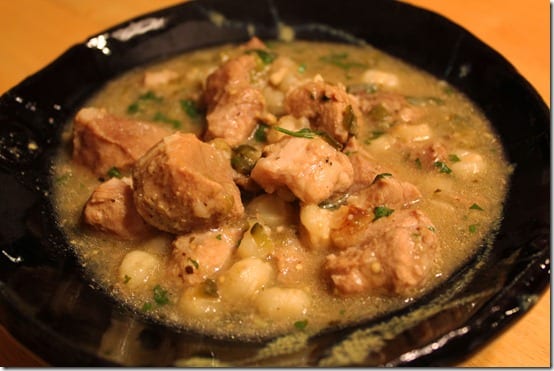 Let the chili settle for 5 minutes, then remove fat from the surface using a large spoon (I always find this process very therapeutic as well.)  Discard bay leaves.  Stir in cilantro, then season with salt and pepper to taste (it was a lot for me) and serve. 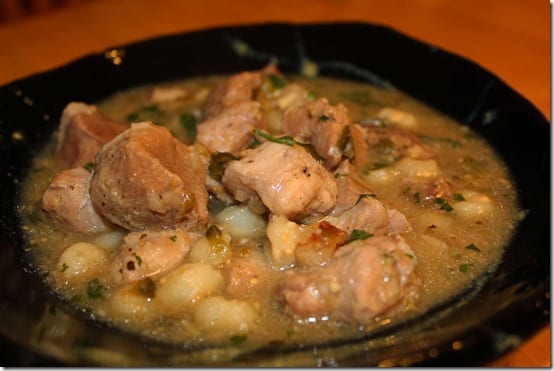 I wish you could see the falling-apart tenderness of that pork.  It was magical.

And the hominy?  I had no idea that I was such a hominy fan.  It’s the most tasty alkalied nixtamalizationed product ever.

We’re a fan of mix-ins for chili and soup, so we also added the following table accessories:

So. I expect all of you to cook this next week – you, your spouse, and your progeny will all thank me with vast amounts of sentimental, grateful weeping.

Edited to add: Since we count calories, I added up all of the ingredients and divided by 8 servings (which is just about exactly what it turned out to be), and there are 477 calories per serving in this dish.

29 thoughts on “My New Favorite Meal.”