You all did as I asked and chipped in your holiday tradition likes and dislikes. So now it’s my turn to fulfill my promise and provide excessively geeky charts and graphs to break down the holidays.

But first, I would like to draw some conclusions and propose some Holiday Protocol Changes based on our Highly Scientific Holiday Survey.

1. “Santa Baby” is, without one single disputing vote, completely despised by all who celebrate, or are even vaguely familiar with, the holiday that is Christmas. As such, it should immediately be banned from all airwaves.

2. “Christmas Shoes” was actually hated by more people than “Santa Baby”, but alas – there were three dissenting votes. So instead of completely banning it, we will allow it – but only on the island of Vanuatu, and you three can move there to enjoy it, hugging each other and crying sappy tears to your heart’s delight.

3. Unfortunately for me, 29% of people actually love “A Christmas Story”. But I would be willing to move to Vanuatu to escape it’s oppressing awfulness.

…if it weren’t for the small Vanuatan colony Christmas Shoes lovers. I guess I’ll have to find my own island.

4. There are some things we all agree on. So clearly, I now know how to throw the most fabulous Christmas Party in history. It will be in my lit-up house, and I’ll be serving Starbucks coffee with Christmas Flavored Creamers and home-baked cookies as we all gather around a real Christmas tree in our Christmas Jammies singing O Come O Come Emmanuel and watching the cartoon version of The Grinch. 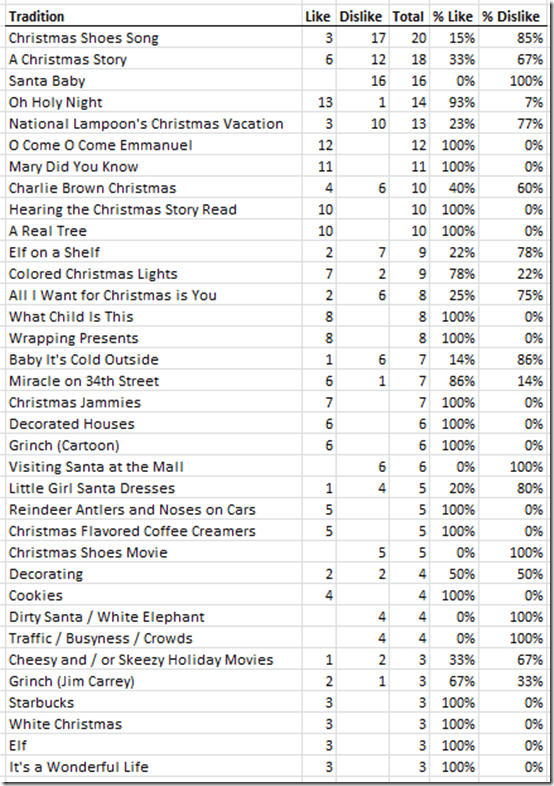 And, as I DID promise a graph, here it is, in all of it’s too-tiny-to-be-legible glory: 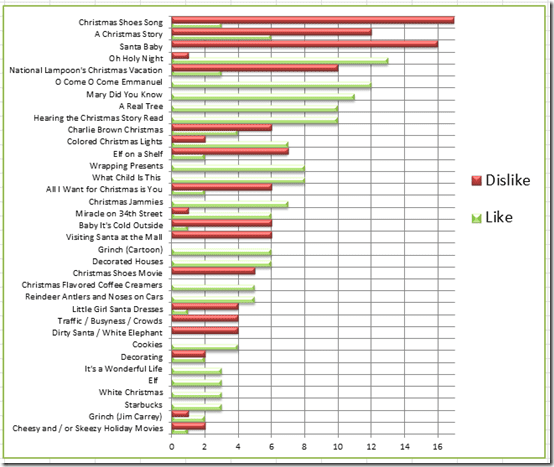 Also. Since this post is quickly becoming a rambling array of holiday-related minutia, I must now give a much-deserved honorable mention to my husband, who proved that he did read my blog when he gifted my car with these: 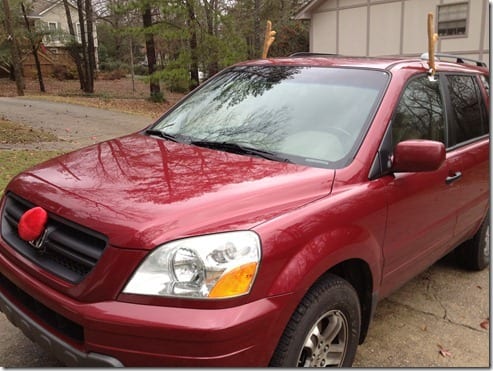 … but unfortunately, after only one small drive in all of my reindeer glory, I became uniantlered. I still haven’t figured out how one could have fallen off, so to whomever stole the right antler off of a Pilot parked at CVS, I do hope you enjoy my involuntary contribution to your Christmas cheer.

And finally (I swear the rambling will stop soon), one tradition afterthought: I totally forgot about my favorite holiday movie of all, Noëlle.

(Mainly because it isn’t a tradition yet as we only discovered it last Christmas, but I plan on watching it tonight and thereby solidifying it as such immediately.)

We happened across it last year while browsing the On Demand holiday genre, and looked at each other sketchily after it started – it’s totally artsy and independent filmy and a painfully slow starter. But the ending is so worth it. It kinda reminds me of one of my favorite movies ever, Dragonfly (which apparently was hated by everyone else as it is also nearly unheard of by the general public), as it has that slightly-eery-culmination-type-ending.

Okay. Rambling over. May your holidays be lacking of Christmas Shoes and full of Holiday-Flavored Coffee.

28 thoughts on “A Holiday Breakdown.”