The mall becomes a dangerous place during the Christmas holidays.

…Kiosk Predators get desperate to sell their unwanted merchandise and begin shooting their helicopters into people’s hair, hopelessly tangling them within and therefore forcing them to stop and listen to their desperate sales pitch while they try to regain control of their follicular situation.

But one constant never changes: Old Men at the Mall.

This is actually an oddly foreign concept that has left me puzzled and pondering for many years.  My Dad isn’t old, but he’s getting there.  And I can’t imagine ANYTHING that he would less likely do with his golden years than hang out at the mall.

But yet there are dozens of them – milling about, drinking coffee, watching the carousel, asking moms if they can sit with them and their kids at the food court (yes, really!), reading the newspapers, and grumpily scowling at children’s lunch messes.

So naturally, the Awkwardly Intense Busybody Club has begun employing these Old Men at the Mall to handle their mall duties.

I took the kids to the mall last week to do some last minute shopping.  After we finished, we headed to the food court to enjoy our customary Chick-Fil-A lunch.  It was uneventful for us, but the people at the next table spilled a drink.  They gathered all of their napkins and sopped up most of it, then went on about their dinner.

A few minutes after they had resumed eating, an Old Man at the Mall walked up and hovered awkwardly close to them and their lunch.

“Excuse me, but I saw you trying to clean up your mess there.”

“Well, they have crews that do that for you around here.”

He looked around with determined (and a little bit scary) eyes, spotted a janitor across the food court, lifted his arm and pointed at her, then made some weird combination of a cat-call/whistle/belch in her direction.

The family trying to eat their meal looked horrified.  I felt their pain…through my intense amusement.

Miss Janitor looked quite familiar with the OMATM, shrugged her shoulders, and indicated that she’d be there when she finished what she was obviously in the middle of accomplishing.

He chatted with the mortified family for a couple minutes about the mall cleanup crew’s responsibilities.  The spilling family quickly picked up their food and scampered off as fast as they could, in a certain attempt to reclaim their dignity.

The AIBC-OMATM was not satisfied with the slow turnaround of the still uncleaned mess at the now empty table, so he set off in the other direction.

I watched him, obsessively fascinated, as he found another janitor.  I saw him talking and motioning urgently toward the small spill.  Other Janitor walked over, inspected the mess, and radioed for cleanup.

Old Man at the Mall resumed his pacing of the food court, looking more important than ever, poking out his chest where he most certainly expected a Badge of Honor to be placed at any moment.

As he should have, since he’d just saved the world from sure disaster. 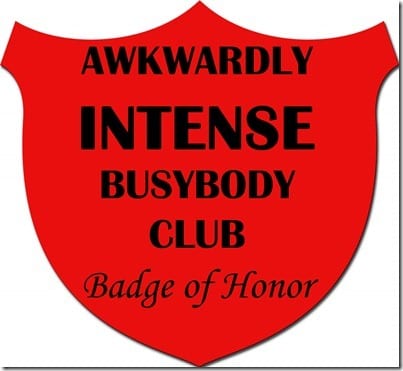