Six short months ago, two people sat on the couch.

One, a woman in her late 20s, two kids down the road, feeling antsy about how to get rid of the baby weight.

The other, a man in his mid-30s, who had been stuck in a continuously yo-yoing range of chubby to walrus since the 2nd grade [his words not hers].

She asked about Lose It, one of the tools he had used on the downhill side of the waistline roller coaster in 2009. He acknowledged its usefulness and potential for success.

A bet was made.

Fat was in the crosshairs of competition.

August: She exceeded her new goal and weighed in at 128.6.  He exceeded his original goal and lost 31 pounds.

September: She kept using Lose it, but quit losing weight.  He kept losing weight, but was doubtful that he would meet his goal of 180.  Their weight loss percentages became eerily close.

Leading up to October 1:

It became apparent than unless she did something drastic, he was going to beat her by the slimmest (no pun intended) of margins.

She considered eating an all raw vegetable diet for a week.  Okay, no she didn’t.

Really, when it came down to it, she realized that she was…actually…OKAY if he won.

And, in perfect Hollywood Timing, He hit his goal of 180 on September 29, and then 179.8 on September 30, a mere 24 hours before the end of the time apportioned.  She was quite impressed, actually, at how he managed to time out his six month weight loss journey to the EXACT moment of perfect drama.

But she knew she was toast.

Then Friday rolled around.  She stood on her feet all day baking delectable treats for her Vault Denim party, and was so rushed all day that she didn’t have time to eat (except for tastings, of course).

So she had hope that she could pull off a miracle the next morning.

The dust had settled. Two nerdy iPhone app dieters put down their proverbial pencils in the SAT’s of nutrition. After 6 months of broccoli instead of potatoes, coffee creamer measured in tablespoons, ground beef patties measured on a scale, and many home recipes analyzed and divided by portion, it was time for the big reveal.

There were no sob stories, no confetti, no teary-eyed hugs of Bob and Jillian, but this was it, nonetheless. Just cold hard numbers. No drama, just numbers. One winner.

And then they ran downstairs to input the data into their spreadsheet.

And so it was that he won, by the most microscopic of margins.

Only 0.8 pounds, and she would have had him.

You can chalk it up to her peaking too soon and switching to a prevent defense. You can say she let him win to stroke his ego, but in any case, the celebration of their diet will occur in the near future over Bob Baumhauer’s Wings and a giant plate of cheesy fries. 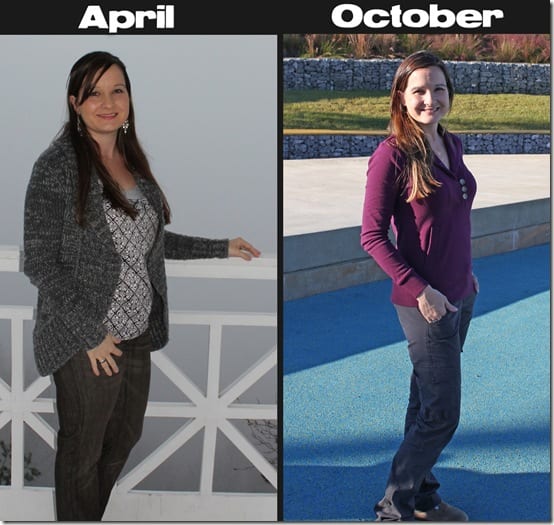 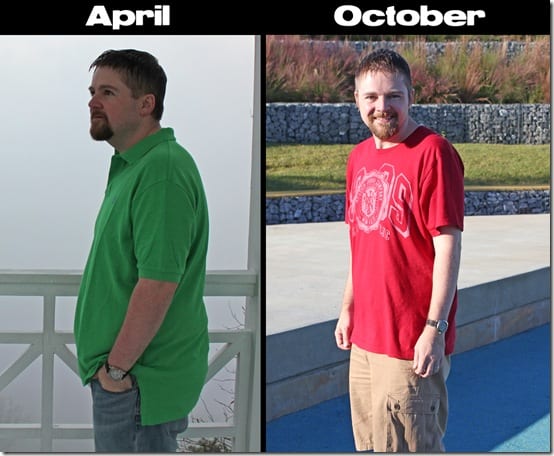 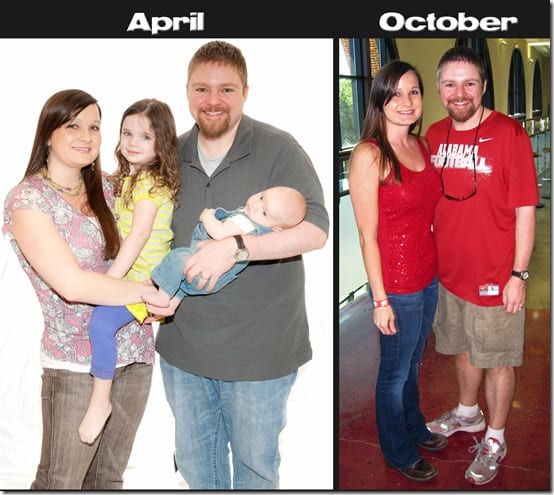 Are y’all discontinuing the use of Lose It?  Absolutely not.  We’re so accustomed to entering in our food now that it doesn’t take hardly any time or effort, and this program has worked for us.  Why would we quit?  And plus, it’s free!!  Chris still wants to lose some more weight, and I just want to stay on it for the accountability (and possibly lose a couple more pounds, preferably in my midsection).

Speaking of midsections, did you tone your abs like you committed to do in August?  Sadly, no.  I ordered Jillian’s Six Week Six Pack Video

the very next week,  and although the exercises were great and probably would have helped, the video was so painfully long – 30 minutes of ab workouts (!!) – and all I thought about the entire time was how much I hated exercise.  So I did it for a week, then quit.  I definitely still have a wiggly jiggly c-section belly.  I really am going to try to find the motivation to start something again.  If only there was an app for that…

What’s with the terribly shadowy “after” shots?  Are you trying to hide something?  No, those would be quick photos taken due to Noah attempting to eat rocks and Ali climbing on a precarious rock wall…parenthood is an impediment to good photography, and that’s just the way it is.