It’s only fitting that I begin this post the way my phone call to Chris started out.

“Everybody is OKAY.  However…”

I blame it all on Noah. 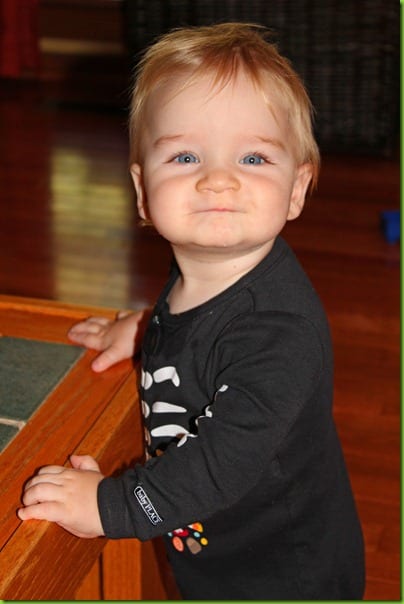 You see, he chose to wear his X-Ray Jammies Tuesday night. 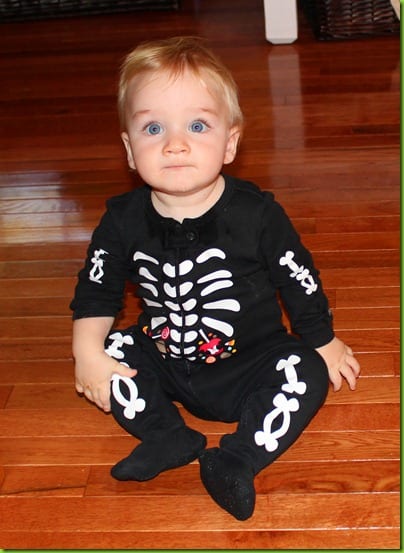 … and I didn’t realize that this was an ominous premonition on his part.

I had high hopes of accomplishing much, as the day before, a nasty computer virus and resulting day-killing completely-unintelligible phone conversation with Mister Karthikayan (think, “Hello, thees ees Peggy!”) stole my good attitude and all of my productivity opportunities.

Noah and I went downstairs first, and I got Noah settled into his exersaucer while I started the coffeemaker and pulled out cereal bowls.  I heard Ali coming down the stairs.

Then I heard Ali coming down the stairs very quickly.  And loudly.

My child is neither quick nor loud.  Ever.

I panicked.  As I began my run toward the stairs, I heard her shock wear off, resulting in the initial scream.

Nearly five years old, and she had just taken her first fall down the stairs.

I got around the corner, and she was only halfway down, but sprawled completely out, over 5 stairs (hardwood, by the way), face down, superman style, screaming insanely.

My Mommy heart dropped through the floor.

I sprinted up the stairs and picked her up, all the while thinking that I probably should have checked to make sure nothing was broken before grabbing her up like that.

I held her.  She cried out-of-control on my shoulder.  I managed to not cry by repeating mumbled phrases of comfort under my breath.

(Noah, meanwhile, was laughing maniacally from the other room, just as he always does when his sister (or mother) cries.  I’m choosing to believe that this is a case of mixed-up emotion comprehension, not sadistic little brotherdom.)

She finally looked up at me and I realized that we were both covered in blood.

Through her completely out-of-control screaming, I managed to inspect where the blood was and was not coming from.

Mouth – thank you for holding your mouth open so widely with that ear piercing scream – thankfully, no.

Then I began to inspect her nose more closely.  It looked gigantically bulbous as if she had just grown my family’s Greek Nose in five minutes.  And a bit crooked.

NoNoNoNo.  No more broken noses in this house!!!

She finally calmed down enough to tell me what did and did not hurt.

No arms or legs were hurting at all – just her forehead and her chin.

That kind of worried me more… then where is all that blood coming from??

We headed straight to the doctor.  No coffee, no breakfast.  I began pondering the act of telling them that she had fallen down the stairs.

…which seems like the ultimate bad parent version of “The dog ate my homework” – so clichè.

I asked her on the way… “How do you think you managed not to hurt your arms or legs at all? That’s pretty amazing…”

“Well, that’s because my head is hard but my arms and legs are soft.”

…which made me ponder the fact that other families – say, ones with less anal-retentive-unbelievably-cautious children – probably have this sort of thing happen all the time.  Maybe this wasn’t as much of an emergency as I feared.  Maybe I just have no experience whatsoever with injuries.

Ali was already calm and had completely moved on.  “Nothing hurts anymore, Mommy! Look! I’m under the TV! Hey – can I climb on that shelf? Where’s my computer? They’re not going to give me a shot, are they?  Why is Noah still in his jammies? And hey – you left my jammie shirt on, too!!”

The nurse came and got us.

“What happened to you?”

I immediately begin feeling the need to assure her that my child fell down the stairs and that this never happens and she’s usually so careful and…I probably sounded ridiculously suspicious in my efforts to quell any and all suspicions.

I was sure that those notes the nurse was taking were something along the lines of “parent seems overly nervous and appears to be repeating herself continuously…hmm.”

While we waited for the doctor, Ali wanted to see what she looked like.  Having no mirror on my person, I took an iPhone pic and showed her. 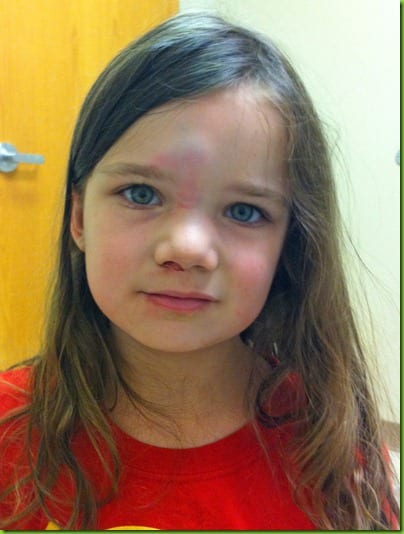 “Then you’d probably also like to start watching Star Trek TNG.  Ever seen a Klingon?”

The doctor came in and took a look.  I consciously made the effort to quit trying to not appear suspicious.

He assured me that it looked to be completely surface injuries, but ordered an x-ray, most likely for my peace of mind.

The X-Ray tech was unusually insistent that I didn’t have to come to the x-ray room, or even wait outside the door.

After a grueling eternity and a half, Ali came back.

“How was your picture taking?”

“Oh really? What did you talk about?”

“What were you doing when you fell down the stairs?”

“Well, I was walking down the stairs.”

I could almost sense the X-Ray tech’s note on my file… “Child’s story lines up with mother’s…she appears to have actually fallen down the stairs.  Perhaps send the mother home with some household safety brochures.”

The X-Rays came back – there were no fractures.  Everything appeared to just be some really ugly surface bruising.

I began to breathe again.

And Ali became very proud of her new look, excited to show anyone and everyone. 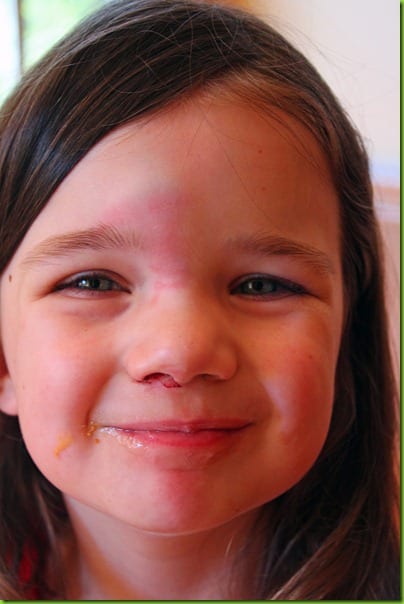 (The Peanut Butter mouth was not a part of the aforementioned injuries.) 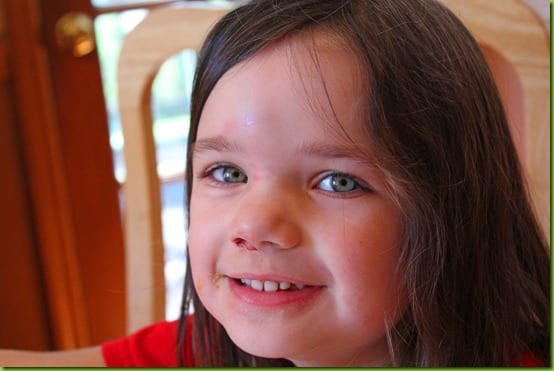 And amidst all of the injury hoopla, Ali had one friend close by her side.  I even heard that she got x-rayed, too.  And I’m pretty sure that once you’ve worn your owner’s blood, you definitely become a real bunny. 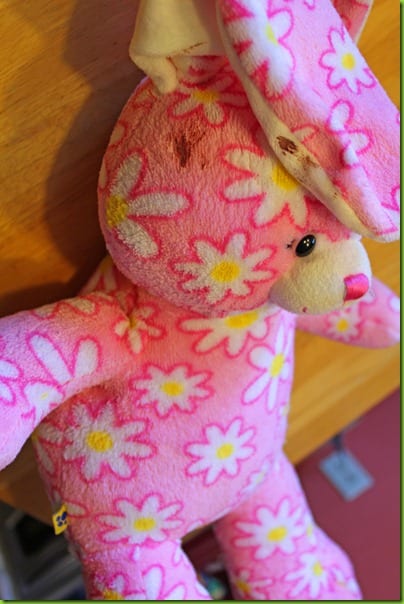 …but I’m really dreading finding out what happens next time that Noah wears his Alien Jammies.