Update: Due to significant changes in the company and a terrible downward spiral in denim quality, I no longer recommend shopping through Vault Denim. I now buy all of my jeans through Nordstrom Rack’s app, HauteLook, which regularly features my favorite brands of designer jeans at half the cost. I highly recommend it! My current favorite brands are Joe’s Jeans, Genetic Denim, Hudson Jeans, Frankie B, Mother Denim, and 7 for all Mankind

So Friday night was the Vault Denim party.

Being that this was the first time I had done major party preparation with two kids underfoot, I got a bit over-ambitious in my preparations.

Also, every recipe I thought about sounded delicious, so obviously, I had no choice but to make them all.

So I spent all day long up to the very last second possible, with Ali’s help and Noah’s hindrance, making knock-offs of everyone else’s awesome treats.

I made Christen’s Soft Butter Mints… 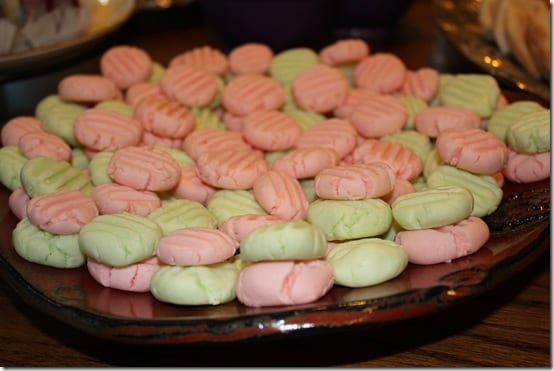 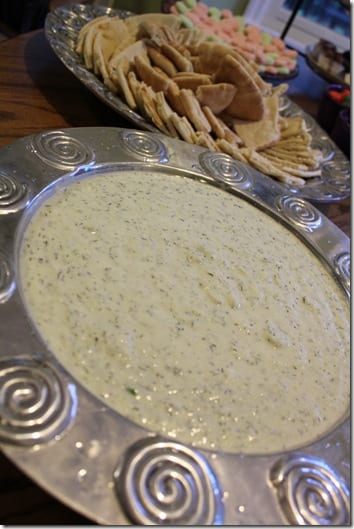 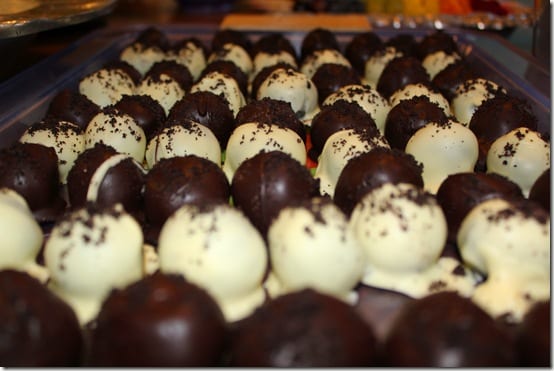 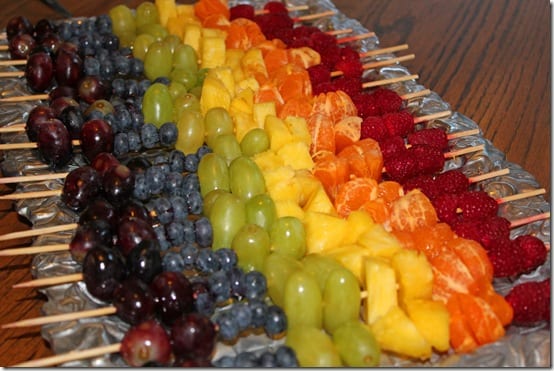 And Lydia, our party hostess, treated us with Edgar’s amazing and gigantic Petit Fours. 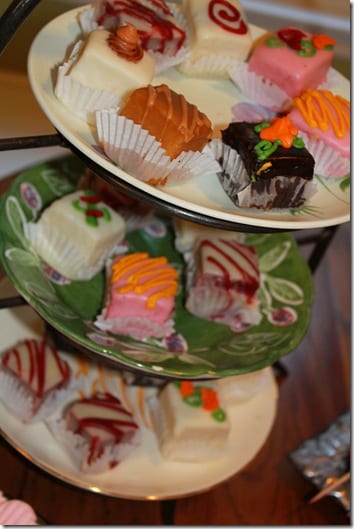 And then, of course, there was the main attraction. 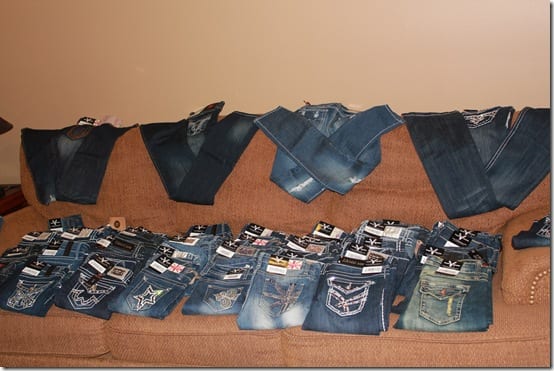 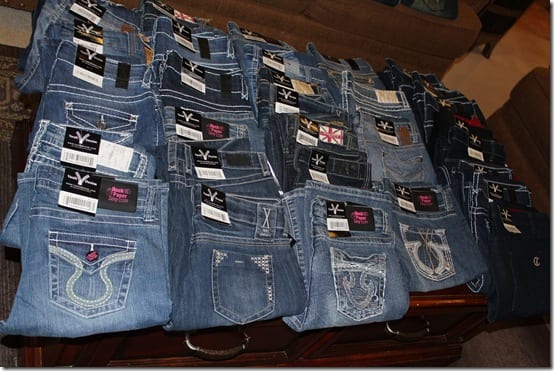 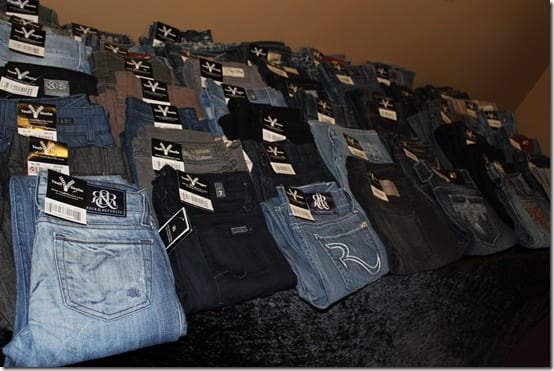 I was in heaven.

They had many of my favorite brands… 7 for All Mankind…Rock and Republic…Citizens of Humanity…and then a bunch of new brands I didn’t know but fell in love with.  And they were actually, on average, less expensive than I expected!

It was almost more than I could take – it was as if the power to demolish Mom Jeans was all in one room at one time – a beautiful feeling indeed.

We had a wonderful group of women come to the party, almost none of which I actually photographed their faces.

Because I was, apparently, too busy photographing their butts.

In fact, as I lay in bed Friday night reviewing the party in my mind, I had a mini panic attack when I realized that I got no photos of the awesome Vault reps, no group photos of everyone who came to the party, and hardly any photos of people at – all except for butts.

So, it’s butts I’ll show you, I suppose.

But as I was saying, a great group.  We had people that needed jean interventions, people that already had great jeans and just wanted more, and even a Mother/Daughter intervention, where Giann gave her Mom the priceless gift of helping her change her denim ways.

Look at that appreciation, mutual admiration, and overwhelming gratitude… 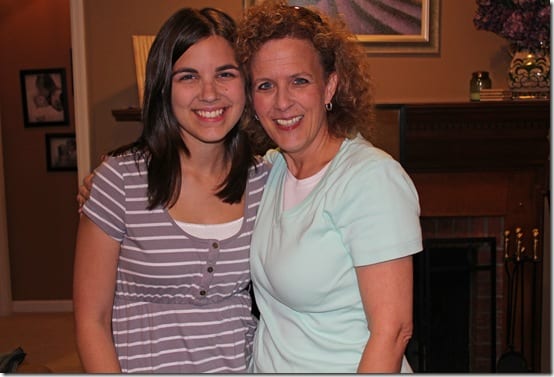 (And that’s the only picture of faces you’ll see in this entire post.  Enjoy it while you can.)

The Vault reps, the unphotographed Kwanzaa and Simone, were amazing.  They consulted with each person and helped them locate the perfect pair(s) of jeans for their body.

And they were experts at what they did.  Almost everyone left with jeans, and most of us found two pair!  Which, since the deals were so fabulous, was not at all overwhelming in cost.

So.  I’m sure you want to see some Vault Magic now.

Several of the guests were willing to “smile” for the camera to show off their before and after rear view.

Our first victim was Subject A. 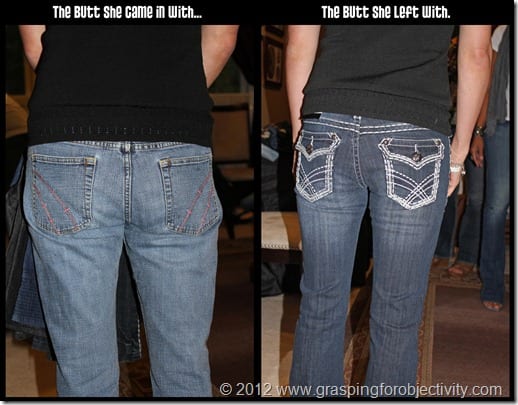 That, dear people of the internet, is stunning.

If that’s not proof of what I’ve been preaching about the right pair of jeans, I don’t know what is.  For a mere $60 and a group of women to help you scrutinize your rear for the best possible fit, you too can lose 15 pounds and 10 years.

Then, there was Subject B. 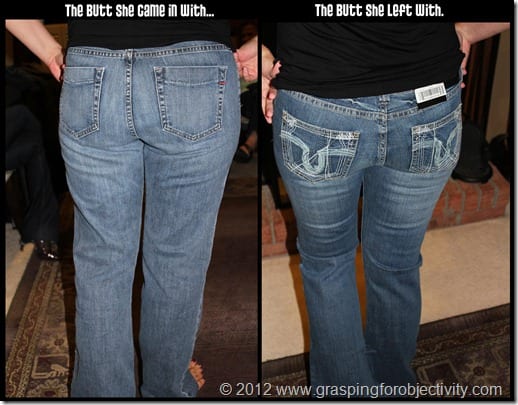 Again, the shape, profile, and contours are fabulously improved. 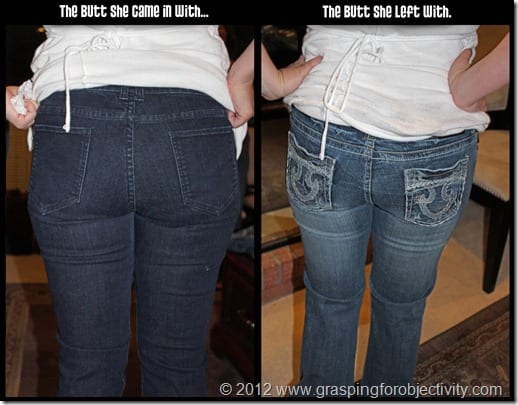 The next day, two of the above subjects texted me to tell me that they were now believers, and that I had been right all along about the power of designer denim.  It changed their butt, it changed their life.

Okay, maybe not their life.  But definitely their butt.

The party format completely exceeded my expectations.  It was fun, it was interactive, we all had a fabulous time giving each other honest help in choosing the perfect pair of jeans, saved hundreds of dollars, lost hundreds of virtual pounds, and all left happy and fully denimed.

Lydia and I are already talking about throwing another Vault party, but if you’re at all interested in having a party, I highly recommend it!  I’ll be glad to get you in touch with the wonderful ladies that I worked with, who can help you find out how you can throw a party no matter where you live.

Or at least your butt.

Sequel: For more before and after photos and tips for fitting jeans to different body types, click here.