As mentioned previously, I’m doing monthly goals and challenges this year. On my list of potential experiments, I’ve had two in particular that I simultaneously dreaded and really wanted to try.

Giving up sugar, and giving up gluten.

It took 90 days to work up the courage to try one or the other, and I chose sugar, even though I usually think very snobbish thoughts about people who would be so moronic as to give up The Ultimate Fruit of Life. Daily chocolate is often what keeps me from losing my Ever Lovin’ Mommy Mind, and I have at least a little bit of it on a daily basis. 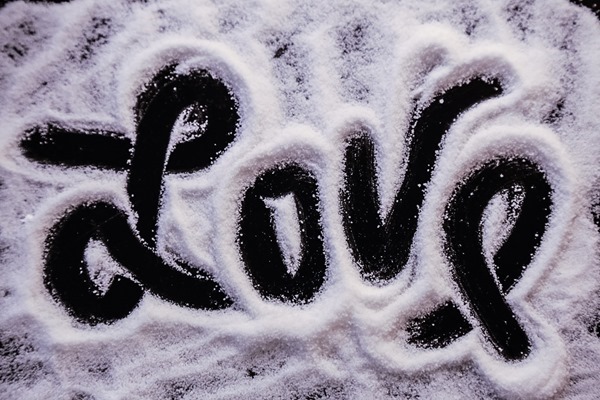 I wanted to experiment with this both for weight and health – Dysautonomia is a very annoying disease that loves to make you give up everything you love (carbonation, caffeine, chocolate) and force you to take on all sorts of unsavory behaviors* (running, drinking insane amounts of water, lots of sleep) to keep it in line. So OF COURSE, a low-or-no sugar diet is highly recommended.

*The only benefit Dysautonomia offers is the edict of a very high sodium intake – it helps keep you from blacking out as much.

Additionally, I’ve been trying to lose weight this year (using Lose It! again) and stalled out in January after losing an impressive four whole pounds, despite counting calories and exercising every day. So what could it hurt to see what a month without sugar would do.

WHAT COULD IT HURT? EVERYTHING.

That was week one. I hated myself. I hated everyone. I hated life. I wanted sugar. I needed sugar. And I couldn’t eat literally anything because literally everything contains added sugar.

The first week consisted of me picking up something to eat, reading the label, then yelling and throwing it down. In order to not feel like a failure, I allowed myself half a box on my tracking sheet for “no sweets” and a whole box for “zero sugar.” I got a few half boxes that first week as I learned to snack on nothing but peanut butter and eat nothing but nothing.

It didn’t help that the children kept offering me parts of their food and snacks as they always do, only for me to have to answer every time, “I’m not eating sugar, remember?”

Chris can testify to my anger issues that week – they were intense. He encouraged me to maybe just cut back on sugar – surely zero grams was an impossible goal. (I think he just wanted his state of familial happiness back.)

The vortex of that hellish time in my life happened on the first Saturday morning of April. I was prepping Noah’s breakfast that I daily make lovingly by hand (frozen Eggo pancakes) and took my usual Mommy tax of two pieces of the most buttered bits of pancake, as I do every morning.

As I put the bite in my mouth, it occurred to me.

I pulled out the box and indeed. They had the worst offender. High Fructose Corn Syrup. 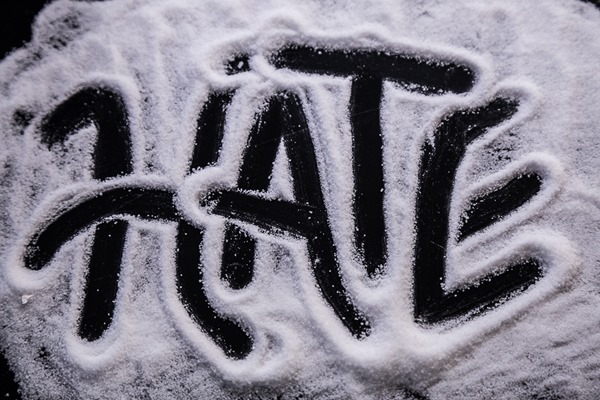 I was tormented. Angry. Feeling as if this assignment was ridiculous and idiotic and a fool’s errand and here I was finding out at the end of the week that I’d accidentally been poisoning my body with the exact thing I’d been fighting and hadn’t even APPRECIATED that I was eating The Nectar of Life.

But the cliché is true. Sometimes you have to hit rock bottom to start to make your way back up.

Slowly, I began to crawl myself out of my angry, unsweetened hole.

I developed routines of things I could eat – and enjoy – that did not have added sugar. My tastes began to change, and things that used to not taste sweet at all now tasted delectable.

And I began to feel better, lose inches, and finally even lose a couple pounds.

I had told myself at the beginning of the month that I’d have blackout dates during this process – Easter weekend (who can pack two kid’s Easter baskets and have zero grams of sugar? That’s unnecessary cruelty) and our beach trip. But when Easter weekend arrived, I experienced the oddest feeling of great trepidation at the thought of allowing sugar re-entry.

We were invited to an Easter party Saturday morning, where there were my favorite type of dessert – Oreo truffles. With white chocolate on the outside, even. For the first hour, I just thought about the fact that I WOULD have one before I left. I finally picked one up and stared at it. I literally felt scared. What would my body do with this foreign object? Did I really want to open this door back up? Would all my feelings come flooding back at me?

The sugar flowed over my tongue like a drop of water in the desert. It nearly tingled. I savored the moment, only daring to have one. It was delicious, it gave me a total headache and made me feel dizzy, but it did not send me into a sugaraholic bender. I could do this.

That night, as Chris and I packed Easter baskets, I allowed myself just a couple pieces of candy. I couldn’t believe I was more afraid of overdoing it than I was eager to allow myself to binge during a pre-planned blackout date. But here I was. I, Rachel Callahan, artisan chocolate connoisseur and rewarder-of-self-with-sugary-treats, was SCARED OF SUGAR.

As the weeks went on, I became less and less interested in sugar. I didn’t lust after it, think about it, or even want it.

And I noticed something else, too: I didn’t particularly care about any food.

I ate when I needed to eat, I didn’t eat as much, and I didn’t spend time thinking about food and obsessing over my next meal.

Once, I was even irritated when Chris wanted to go out to lunch – why waste all that time on something as inconsequential as food? I could just eat a little cheese here…

And so, it seems, at least for me, that sugar was THE addicting quality of food. It was the thing I craved, the thing that drove me back to eating more, and the thing that kept me from losing weight. And, for what it’s worth, one of the things that made me feel bad. The lack of sugar has certainly not cured my daily battle with Dysautonomia, but I have had more good days this month. 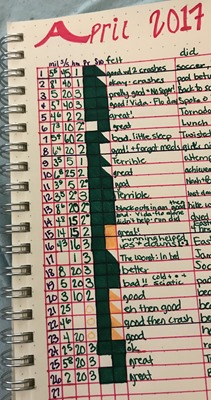 It’s that last column there…the yellow-out dates are Easter and the Beach. Even though they were pre-planned days, I couldn’t bring myself to eat ACTUAL sweets while we were at the beach. I am abhorrent.

I haven’t decided what is to be the permanent status of my relationship with sugar. It’s complicated. I cannot possibly imagine parting ways forever, but I do want to have some space from it for longer than a month, so I have semi-committed to continuing our trial separation for 90 days. I still get half boxes some days, and that’s okay. It’s not like I’m truly living the Zero Gram Life – I’m pretty sure that is unattainable unless you never go out to eat and never eat anything that wasn’t made from scratch. But the sheer amount of sugar I’ve not eaten in April – especially from the kid’s Easter baskets which are mysteriously way more full than they would usually be at this point – is pretty substantial.

And I don’t hate it. Not anymore.

Even when, just this morning, Noah offered me a Fruit Loop.

“Oh yeah…” (he put the Fruit Loop back and picked up another color) “But surely you can have this one.”

“You’re not even eating green sugar???”

I know, son. It makes no sense.