I was experiencing, for the first time in my life, the harrowing realities of having a two and a half year old male creature.

He was fantastically adorable. 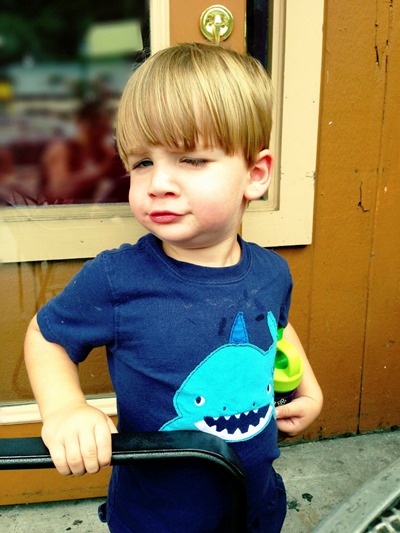 Which did not make up for the fact that he was two and a half and therefore made me fear for his life continuously.

He wasn’t the type to take dangerous risks. In that, I was lucky. But he was the type to, every now and then when I was resting in my fortune that he wasn’t SO bad, do something completely and terrifyingly unexpected.

Such was the case with The Black Spot.

We were in the entrance plaza, where there’s a semi-circle of low steps that lead from the front door to the desks. Those steps are well-traveled steps, and they definitely looked the part that day. It’s a constant movement of people walking through, tracking all of the outside world in and depositing it on those steps before truly entering the library.

And I still haven’t figured out what I did to cause the Creator to smite me so, but this black spot caught Noah’s eye that fateful day in 2013. 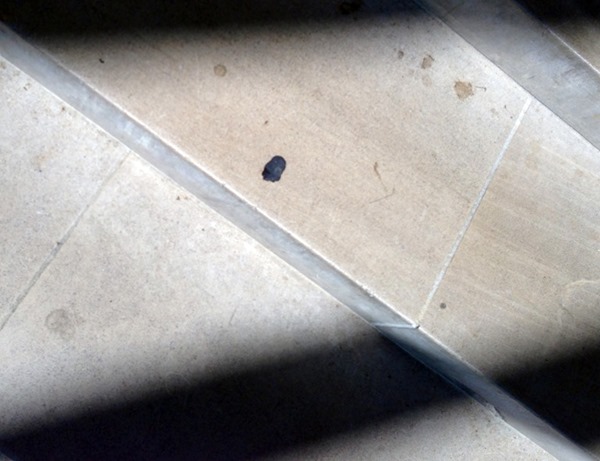 I saw him take a second glance at it and I sadly did not think fast enough to compute all of the parallel realities in which this crucial second could take me. Ultimately, I was counting on my son’s relative calm to guide me through this potential storm.

But. Within .0483 seconds, he turned to that Choose-Your-Own-Adventure page that ends in “…and all the characters died. The End”

He stooped down and my precious lovely child LICKED THE FREAKING BLACK SPOT.

I saw his tongue go out and immediately started praying.

I leaned over and checked. It was.

And my life and surely his were now over.

I was the failure of a mother who’d allowed her gorgeous toddler to lick the shoe sole botulism coating on a piece of year-old used chewing gum.

And he would surely start seizing at any moment.

I momentarily pondered washing his mouth out with Purell. Or perhaps a bar of soap. How about foaming hand soap in the bathroom? Maybe just dunk his head in the toilet. It couldn’t make it worse.

But deep down, I knew it was too late. I could visualize those wriggling black-spot germs burrowing into his tongue. I lived out the rest of that day in fear, watching him for any sign of instant demise.

But somehow, that was 2013 and this is 2017 and he’s still a healthy, gorgeous boy – and one that has the tiniest bit more sense than that black spot tasting two and a half year old.

For the first time since The Incident, I braved the downtown public library again with my children in tow. It wasn’t that the library had done anything to me, per say, but the Mommy Guilt that would scream at me from The Black Spot – I wasn’t sure I could bear up under it.

As we drove slowly to The Place of My Failure, I told my children the story of The Black Spot.

Ali remembered it, but Noah did not. He was fascinated by the tale of this unknown toddler – he couldn’t fathom ever being a Spot Licker.

We walked into the lobby and to the parcel of flooring that I knew I’d never forget. Both kids were eagerly chanting “Where’s the black spot? Where is it?”

We found the stair and there was indeed on its surface a slightly lighter spot – perhaps the same one, but probably not. After all, black spots come and go, but memories of licking them stay forever.

Noah proudly posed with his history. 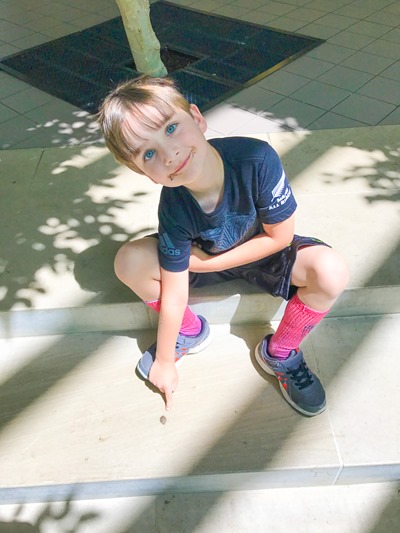 And the Oreo shrapnel around his mouth really added to the believability that he had, at one time, licked that. 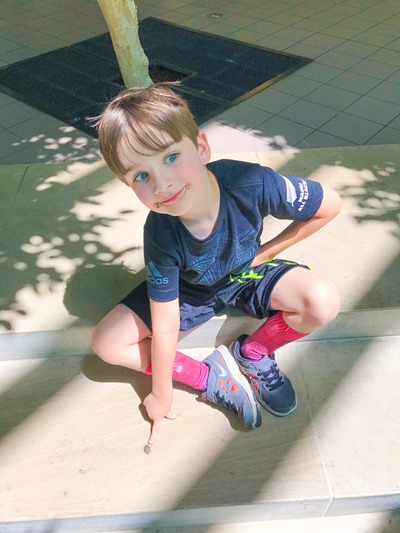 And all I could do in that moment is what every Mom in the universe has done before me. Sigh and silently hope that he, one day, has a child just like himself.

5 thoughts on “Revisiting The Black Spot”