I’ve always been a technological early adopter. From texting before it had a name, to joining Twitter in 2008 and scrolling through every user in Birmingham then writing my first tweet: “I don’t think Birmingham is ready for Twitter just yet.”

(And we weren’t. But I came back year later, and we were.)

But in all of my technological experimentation, I’ve never been as quickly convinced that something would be world-changing as I am about a new free app/social network that released last week: Periscope – an app that provides an easy platform for interactive live-streaming.

(Note: This is not a requested/paid review of any sort. I am just this excited about it.)

You are correct. The week before last, I discovered Meerkat, a similar app, and even encouraged you to join me, which some of you did. I knew Periscope was coming, and that the Twitter-Owned app was going to have the advantage, since a) they’re Twitter-owned and b) Twitter wasn’t playing nice with Meerkat.

And sure enough, everyone that was early adopting Meerkat with me jumped ship to Periscope. I did too, and although I still prefer the look and a lot of the features of Meerkat, there were some nice features in Periscope, too. And, they are owned by Twitter. So they will most likely win this battle.

So I’m sorry, Most Loyal Readers Who Followed Me to Meerkat – for now, I’m moving to Periscope. As much as I’d like to support the underdog, I must be realistic.

Now. For those of you who are completely lost.

Why is this so great?

Because it allows a whole new level of interactivity that we, The Internet Population, have never experienced before. We get to share real, live moments.

So, instead of looking at my still, quiet photos of our visit to The Botanical Gardens that show my toddler when he’s being bribed to smile, 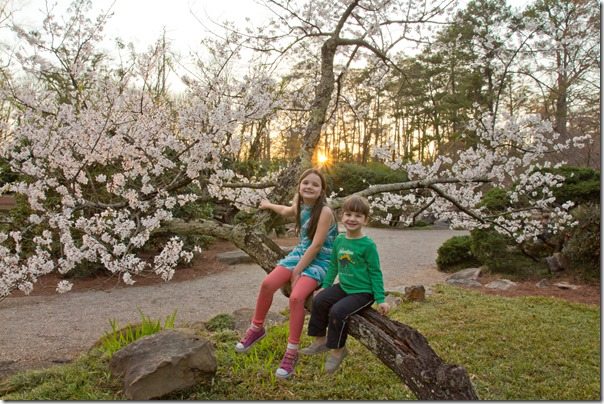 And instead of not having any idea that Ali had just burped ferociously loud right before this picture, 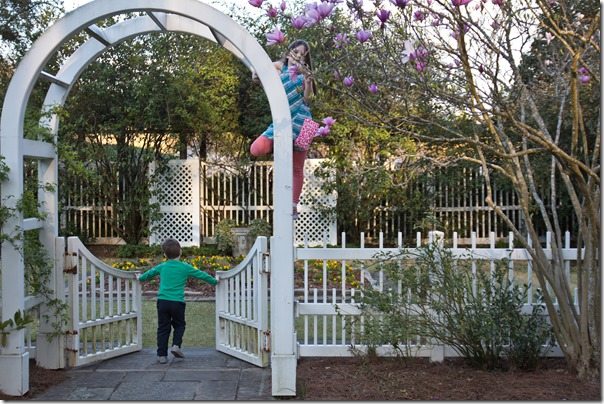 You can experience it all with us, uncut and unedited – and get to hear and see Noah’s angry attitude and Ali’s burp, type messages to us, and we can answer you verbally. And then we’ll basically be BFF. 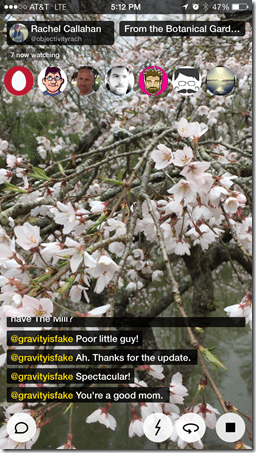 Yes. This is a Meerkat screenshot from my pre-Periscope days. But Periscope works basically the same way.

Perhaps this sounds like the greatest waste of time in the entire universe – and maybe it is. This leap forward in social sharing has definitely made me revisit the always-open discourse in my mind of how much is too much, and when should I just live my life and leave the internet out of it. But at this point, the kids find it fantastically fun to do once a day or so (they like interacting with people who talk to them), and it’s a great way to get to know you all better.

I have some fun ideas for the future – such as taking you all jeans shopping with me, telling live stories (I actually already tried this yesterday with mixed and somewhat awkward results, but I REALLY want to get better at verbal storytelling so you get to watch my struggle in the meantime), sharing my sunsetting adventures with you, letting you see what our school day looks like, and whatever other adventures happen to come our way.

And I’d love to see your streams, too!

Plus, as Jimmy Fallon on Periscope has shown us, you can have deep, stimulating conversation with the internet through this app. 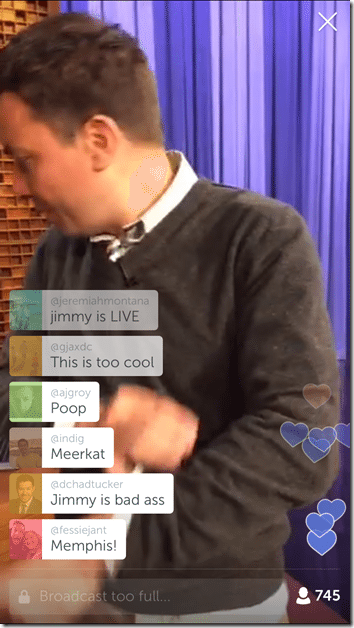 So clearly it’s going to be a hit.

If you’re willing to join me on this little experiment, here’s what you need to know:

2. Download the app called “Periscope” – make sure you get the one created by Twitter – there’s another one out there for spying on people and I would never encourage spying on people. (It’s only available on iPhones right now – sorry, Android users.)

3. Allowing Push Notifications is pretty much a must, since it’s a live stream (unless you stay really current on your Twitter feed.) However, live streams are available to watch on Periscope for 24 hours after filming (Scroll down on the first tab to “Recent” to see the day-old streams of anyone that you’re following.) So if you miss it, it’ll still be there for a little while.

One last disclaimer. I could be completely wrong and watching me do my life might be the most boring endeavor ever construed. And I might be so awkward that you’re all like “we’ve been reading her blog because…why?!”

If so, forgive me and we can just go back to knowing each other as words on a screen. Promise?

9 thoughts on “Your Official Invite to My Reality Show.”