So Alabama lost. Did you hear?

My husband handled it awfully well – I think he nearly tuned out the last fifteen minutes of the game, clearly as a psychological coping mechanism. But it was effective, as the children didn’t get woken up by screams of agony and defeat, which is a much better fate than most of the children in our great state.

I have a theory about what happened this year. Why they lost a game in the regular season, and why they lost this playoff game that they were clearly supposed to win.

It was the fashion.

Every year I collect the latest and greatest of Alabama Fashion Trends for you, and this year was no exception – at least, in the fact that I tried.

But the fan’s hearts just weren’t in it this year. Gone were the grown ladies wearing tutus and the grown men wearing curious houndstooth rice farming hats. No more were the bedazzled and appliqued jeans or matching full-length sequined robes (with the fur.)

And if the fans weren’t plugged in, how were the players supposed to be powered?

If the fans weren’t committed, can we really expect Saban to be able to work magic?

No, fans. We cannot.

Alabama Football is fueled just like Neverland – on belief.

If you don’t show your belief and show it loudly, Saban Pan can’t fly, the Lost Boys can’t defeat Captain Hook, and all the cheering Tinkerbells in the world won’t be able to bring magic back to the island.

No. Instead, this year’s fanwear was largely made up of dead things. 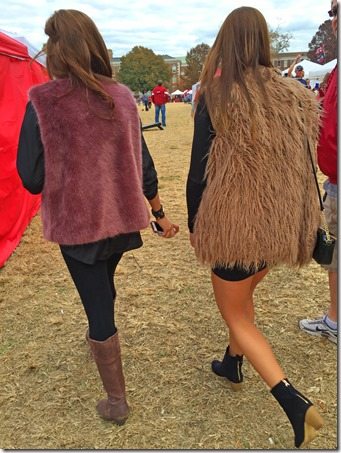 I mean. A LOT of faux animals died to be paired with a pom-pom stuck in a boot. 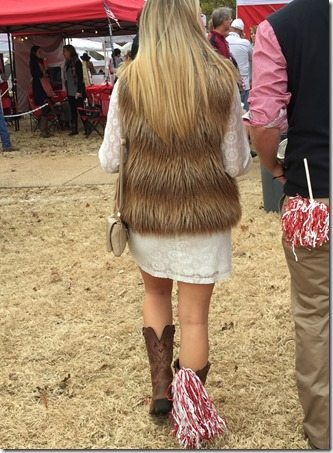 And I wasn’t the only one noticing. 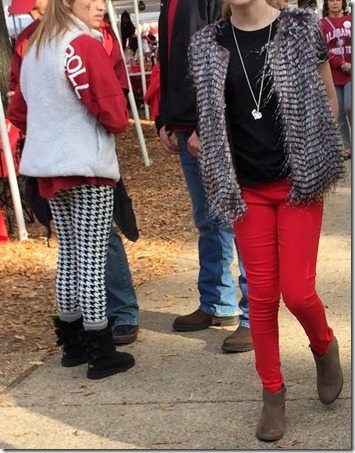 That’s right, Houndstooth Legging Lady. You are SO last year.

Seriously. How many Ewoks should have to die for one girl to attend a football game? 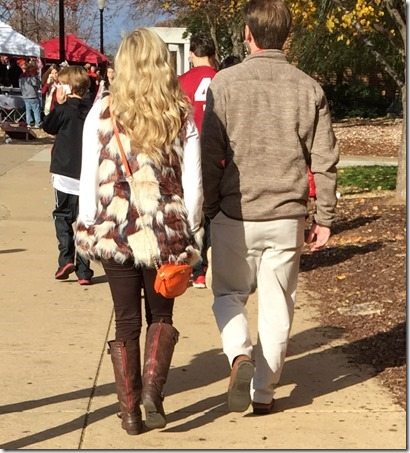 And the dead things weren’t limited to vests, either. If you don’t have anything else to wear, just cut the last twelve inches off of your Abominable Snowman Outfit and wear that! 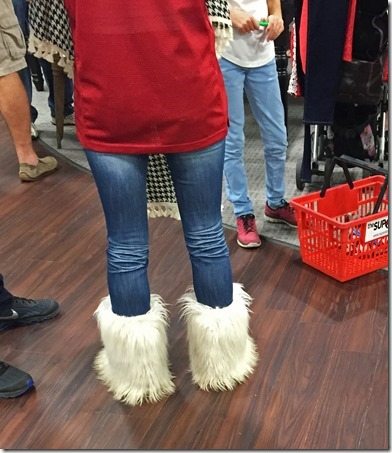 C’mon, Alabama. We can’t fuel a team with such indifference. If you’re going to wear a dead animal, at least do it right.

Even Florida can do that. 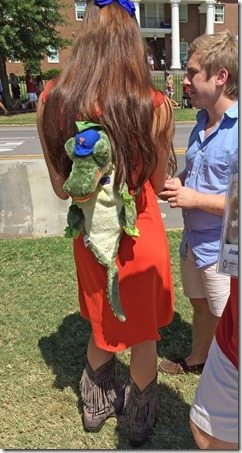 And then there were the tight things. 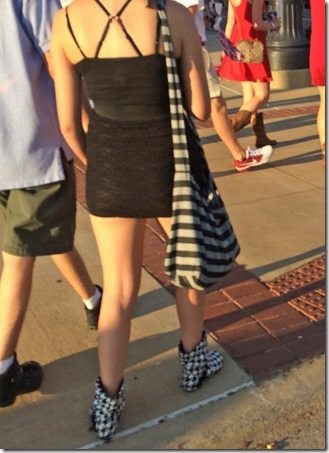 Taking Lace where no lace has been before… 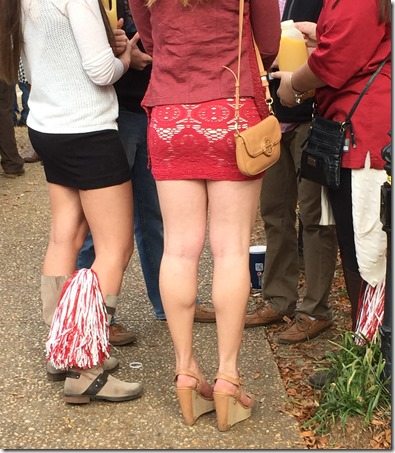 Everything so Boa-Constrictor tight that their owner might be the next dead thing to be worn by another fan. 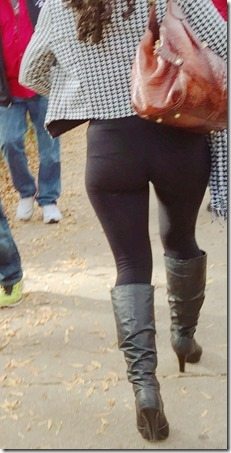 Lifts and separates – all the way up!

(But I will admit that it did give me a tiny thrill to see that someone actually did buy the Ace Bandage Hosiery from HauteLook. I’m sure it was on my recommendation.) 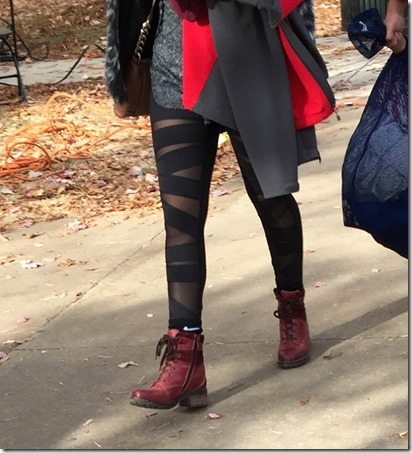 .
And of course there were doilies as shorts. 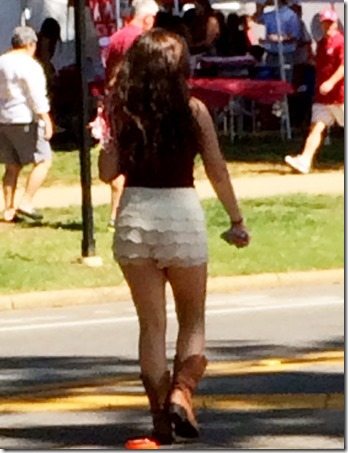 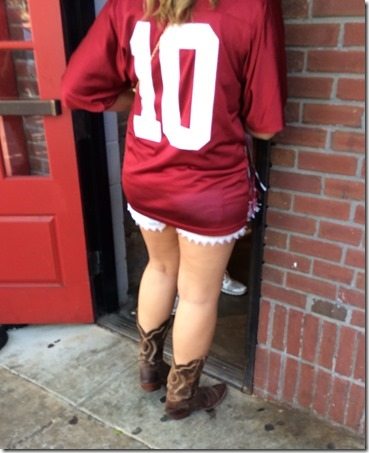 Because doilies are the new black.

It’s just the facts – the fan base didn’t play offense or defense with their fashion choices this year.

Okay no there was a little offense. 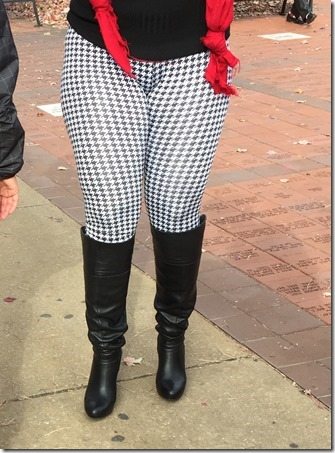 But between Ill-Fitting Plaids, 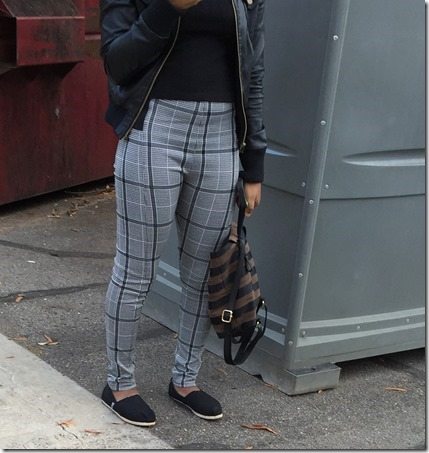 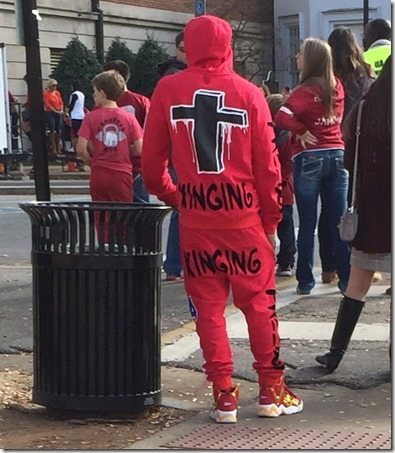 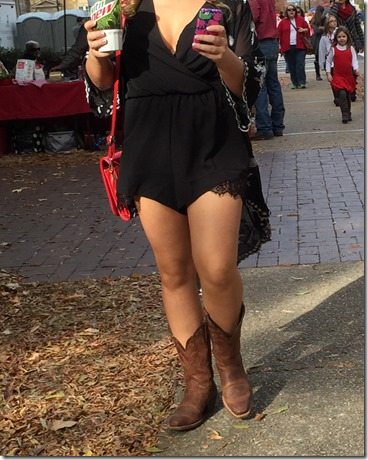 The team just couldn’t pull it off this year.

In fact, almost all of the fans seemed much more interested in themselves than in what we were all supposedly there for – the players. 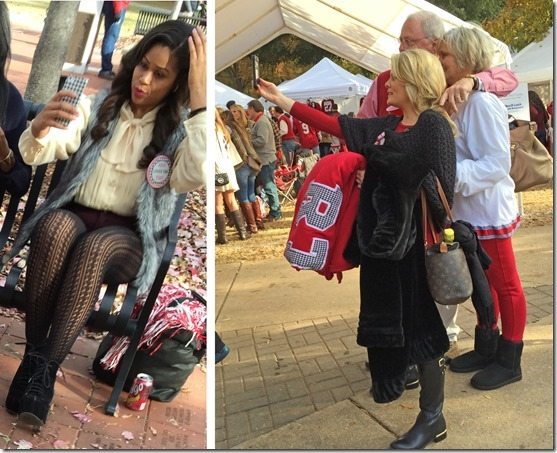 But let’s give it up for the few fans who still cared – who still believed – who still did their part to help create the ever-needed football pixie dust.

It was to them that we owe our twelve wins.

Thank you, Top Hat Man, for reducing the earth’s supply of natural houndstooth with the making of your fantastic show of belief in the team. But no thank you, for standing between me and my sunset. 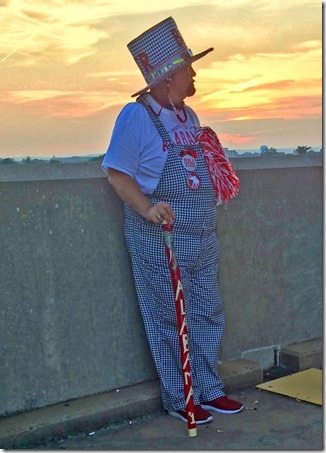 Thank you, Spandex-Wearing Man, with your wig conspicuously on opposite sides than your shirt and socks, for doing your part. For showing your belief. For powering the team. 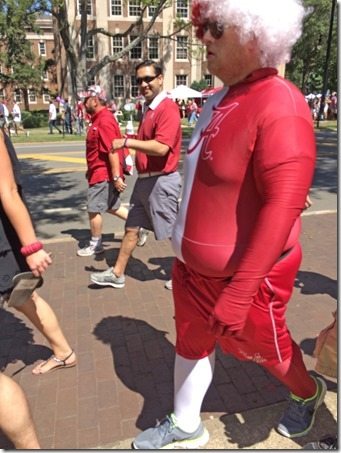 (No thank you, sunglass-wearing-man in the background, for laughing at he who is committed to the program.)

Thank you, Cruella De Vil’s daughter, for stepping right out of 1986 to come believe in your team. In our team. In the nation’s team. 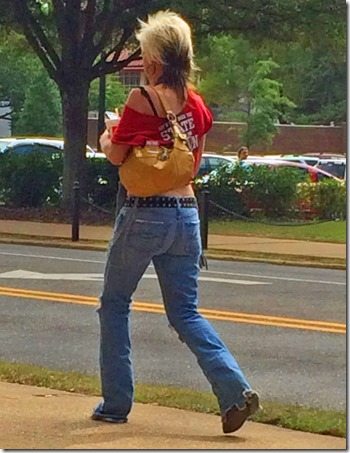 Thank you, Awesomely Hip Baby, for stealing Saban’s hat to infuse it with some of your infant magic. 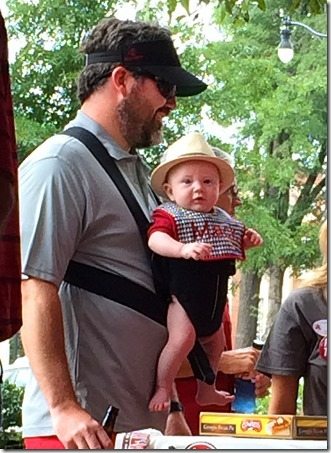 Thank you, Grandma who put a little something extra over your work pants and under your hoodie, for reminding us of the power of the houndstooth miniskirt, regardless of its pairing. 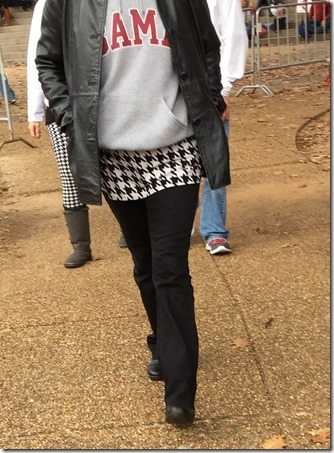 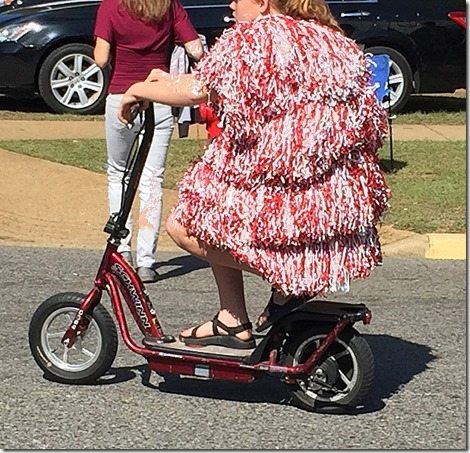 Thank you, Coordinated Couple, for bringing the Yin and Yang to Gameday. 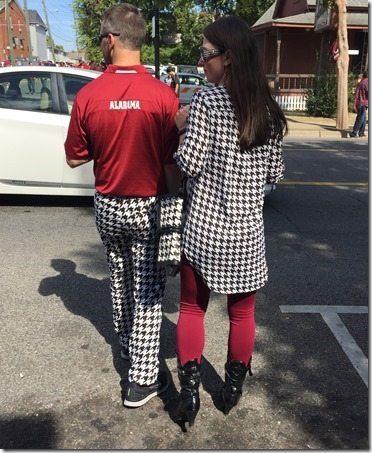 And thank you, Converse-Wearing-Santa, for asking Saban what he wanted for Christmas…. 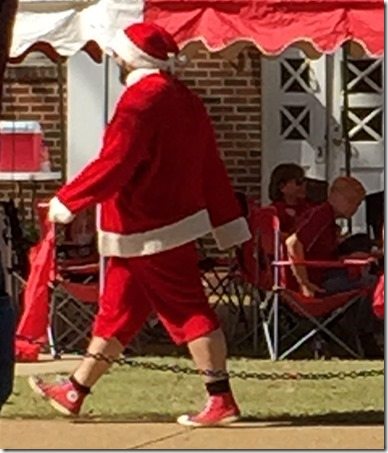 Even if you didn’t deliver.

But it’s not your fault, it’s the other fan’s.

Next year, people. I expect you to trade in your dead things and doilies and put on the Spandex, Pom-Poms, and Fuzzy Hats.

THEN we can win a National Championship again.

To see my collection of Gameday Fashion posts, click here.

17 thoughts on “Why Alabama Lost.”