I hate that movie because it’s a train wreck. And I despise all train wreck movies – Ben Stiller and Chevy Chase are my nemeses.

Yet, I set myself up.

Saying that we needed to reorganize Christmas by illnesses, then post-scripting it with a “no really I’m just kidding – we’ll all be okay by Christmas day.”

On Christmas Eve, Ali woke up with a stomachache. Moments after telling me this news, she proceeded to vomit profusely.

The bright side was that Chris was at work and I could shatter his Christmas Heart via text, so I didn’t have to actually witness the implosion of his hopes and dreams. Chris had gone into work at some unholy hour so that he could leave at 2:30 and proceed as quickly as possible with our Christmas paradise.

But no. It was destined that I would spend the morning running with my daughter to the bathroom, holding back hair, providing apple juice, and finding anything distracting for her to watch on television. All while attempting to keep her now-well brother un-bored with our couched state of affairs.

A friend suggested I get our doctor to call in dissolvable Zofran. “It’s a lifesaver”, she promised.

I called the doctor’s office. They sounded exactly like you’d expect people to sound who were seeing the world’s biggest outbreak of puking, flu, infected, nasty kids the day before Christmas. But they promised me they’d call it in.

Ali puked again. Which meant I now had a window. A small one, but a window indeed.

We gathered supplies in the attempt to make it to the pharmacy. A trash can, paper towels, and my car keys.

Right before we walked out, I thought it best to call the pharmacy and make sure they were ready for me. CVS is, after all, infamously annoying at calling me a dozen times to refill a prescription I don’t need or already refilled, but taking three days to fill a prescription when I actually need it.

Ali was sitting by the stairs, already moaning again. I could see my window shrinking. I called the doctor’s office back. The receptionist yelled to the nurse, who yelled back.

I whimpered, sounding exactly like Ali. Then called back my completely untrustworthy CVS.

“Hey! I’m glad you called back. We found it as soon as you hung up.”

I loaded the children and the economy-sized trash can and set out on Christmas Eve adventures, Ali moaning and Noah protesting.

Never mind that he’d been complaining all morning about being at home.

I did not, however, consider the proximity of my CVS to one of our city’s biggest shopping malls.

Traffic was stopped a mile from CVS.

Ali’s moans intensified. The puke-free window was barely a crack now – not even a fly could fit through.

We finally made it to CVS and it turns out the traffic wasn’t just for the mall. There was a line six cars deep at the CVS drive-thru.

There was no way I was taking an actively puking kid into the pharmacy – especially when any sort of jostling only sped up her condition. Yet I knew how long it takes one car to get through their drive-thru.

And there were six.

“I have to go to the bathrooooooom!”

Of course I’d forgotten to make him go before we left the house. I was much more concerned with his explosive sister.

“You’re gonna have to hold it.”

I looked to the left. There was a CVS employee sitting out back smoking. Another walked out to join her. Cars in front of me, cars behind me – this was no time to pee outside.

So I texted my husband. Because you need a man to help solve this sort of problem. 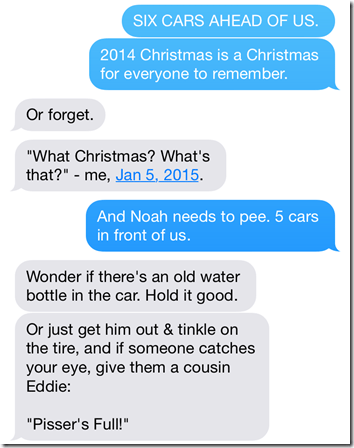 I wasn’t a fan of the tire idea, but the water bottle idea wasn’t bad. And the Chick-Fil-A cup I found was even better – a bigger target.

And so, right there in full view of the two smoking ladies, I dumped the slightly moldy lemonade out the window, stood my son up, pulled down his pants, and told him to aim well.

I began to worry when I realized exactly how full his bladder was – The Yellow Lake inched nearer and nearer to the rim and I wasn’t positive that my son knew how to “cut it off” for a quick dump out the window.

But just as I thought it couldn’t hold any more without sloshing, he finished with a satisfied smile on his face.

And I dumped the cup out the window for the second time, as the CVS ladies gazed and smoked.

But not until after I sent a picture of the PeeCup to Chris (You’re welcome for cropping it out.) 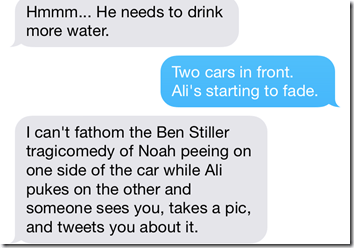 Finally we made it up the the window. My introverted inhibitions had been stripped away by the whole public urination episode, so I said to the pharmacy tech,

“Holy Crap your job is awful today! I hope you’re using a lot of hand sanitizer!!”

She looked at me warily and a bit suspiciously, “I’m not personally using hand sanitizer…”

“Well you should! Your line is longer than the line at the mall!”

“Thanks for letting me know.”

Except she didn’t sound very thankful at all.

She gave us our Zofran and I ripped open the bag and gave the intensely whimpering Ali her first pill.

But alas, ten minutes later and LITERALLY ONE BLOCK FROM HOME,

she proceeded to loudly vomit in my car.

Thankfully, she had good aim.

That was at noon. And it was her last episode. So we called off our plans that evening (our traditional lasagna with my parents and other guests, hosted at our house), but tentatively kept our Christmas Day plans, with full disclosure to those involved.

Miraculously, Ali felt amazing by Christmas Eve night. We read the Christmas story, thanked God for Baby Jesus and stomach contents staying put, donned our Christmas pajamas, and had the magical night before Christmas (minus lasagna) that we needed. 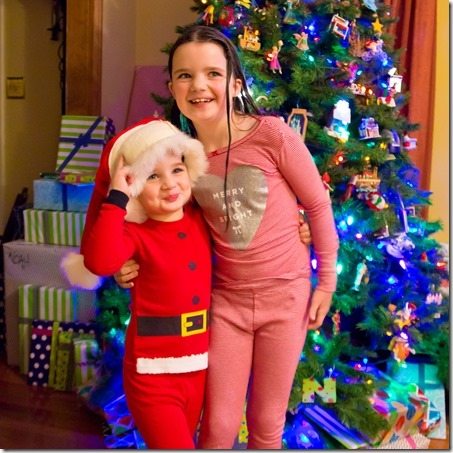 The next morning was lovely, with both of the kids bright-eyed and excited and 100% healthy, reveling in the joy of Christmas day. 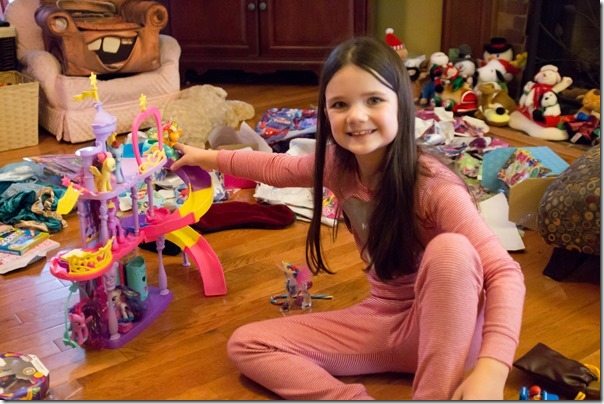 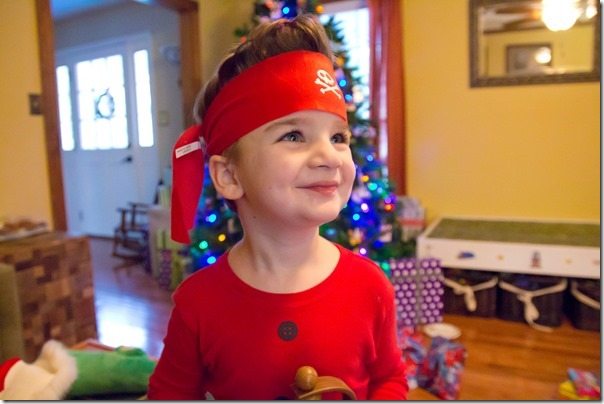 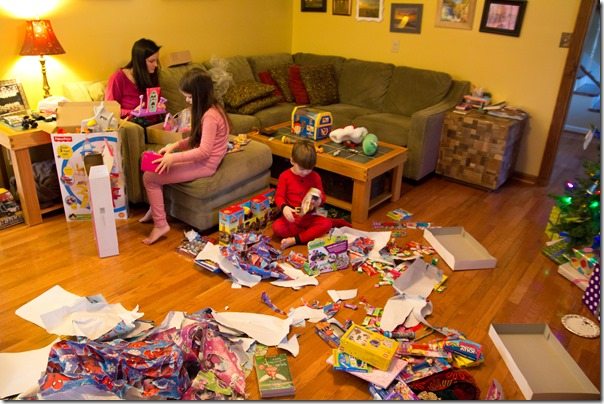 After all the presents had been opened, Chris and I ended up in the kitchen alone. I hugged him and said,

“You know, sometimes the happiest we can be is when we’ve just recovered from complete tragedy and uncertainty. We’re less stressed out and more thankful for Christmas than ever!”

He replied, “So you’re saying that true happiness is just north of misery?”

He hugged me back.

We had our Christmas lunch with Chris’ family, then Christmas dinner with my family, all lovely and happy and not at all high-strung. 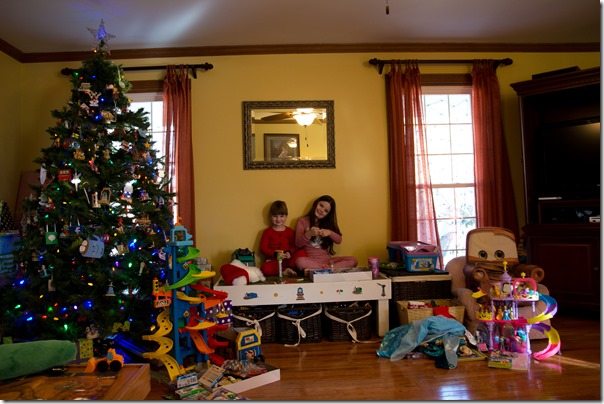 We put the children to bed, happily exhausted by the day’s bliss.

Until Noah awoke at 11pm….with croup.

Like the worst croup he’s ever had…to the point that I was texting my friends at midnight asking if I should take him to the ER.

We finally got it mostly under control, so I put him in bed with me and sent Chris to the couch (rather voluntarily, since he’s not a fan of being beaten by little people in his sleep), and I proceeded to try and get my son back to sleep.

He was not, however, sleepy.

I whispered CLOSE YOUR EYES AND GO TO SLEEP at least 6 billion times for what had to have been 48 hours straight before I finally realized what I needed to do.

I had to place myself in the most uncomfortable position possible.

I laid on my stomach next to Noah with Bob the Tomato’s plastic eyes shoved between my boobs and tearing into my ribcage, and Larry the Cucumber’s protruding eyes stabbing my appendix. It was a completely untenable position, and it was the miracle cure. He immediately fell asleep.

I waited, counting his deep breaths and watching for fluttering eyes, Finally, I felt it safe enough and pried myself away from the Veggies and went to sleep.

Until he began a calculated and strategic kicking assault. Just enough time between kicks for me to fall back asleep, kicks just hard enough to bruise my internal organs.

But we survived. And we got drugs the next morning. And he recovered. And we moved on.

Friday and Saturday were idyllic, containing zero plans and therefore having room for last minute runs and Zoolight Safari visits and plenty of time to play with new toys. Chris made a resolution to make zero plans in 2015, therefore minimizing the possibility for any future expectation shattering disappointment. Everyone was finally well, everyone was happy, everything was lovely.

After an especially beautiful family outing on Saturday where we ran as a family for the first time, 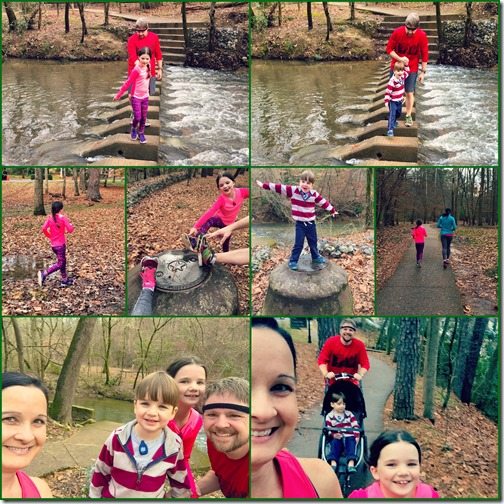 and then visited the Botanical Gardens, 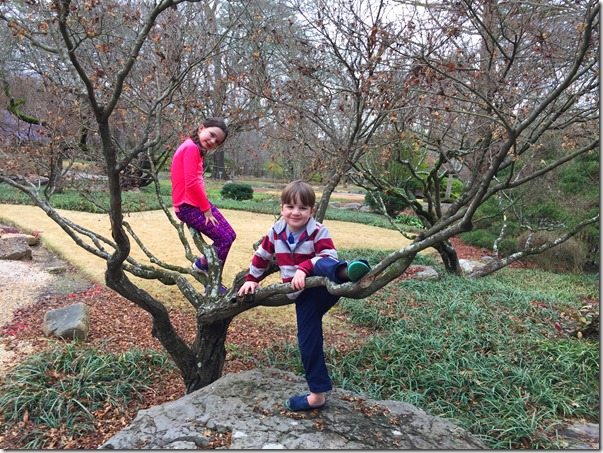 we finished our fun by going to Mugshots for lunch – home of the best hamburgers in Birmingham.

They only had seating on the heated outside patio, so we bundled up and took it.

The kids continued their expulsion of energy, running around the table and such. Noah had his face and nose pressed up against the window banging it when we realized that the nice couple on the other side were staring and not at all amused.

“No more banging on the glass, son.”

They brought us our burgers and chicken and fries with zero silverware or napkins, so I tore Noah’s chicken into bigger chunks than usual, allowing it to cool off until I received a knife.

It took half of two forevers for her to bring us silverware, and by then I’d quite forgotten that Noah’s chicken needed more attention – and after all he was shoving his face quite efficiently, so he didn’t seem to need me.

He wasn’t taking the time to actually bite his chicken like a normal child – he was just shoving those giant hunks into his mouth, and one finally got the best of him.

He stood up in his chair and began choking. LOUDLY.

I ran over with a napkin and started pounding him on the back. Which is when he rewarded my outstretched hand with the entire contents of his stomach.

But somehow he was still choking?

He turned around, still standing in his seat, facing again the couple on the other side of the glass, hacking in grand, bubbly, piercing spasms.

And at the exact second, at just the right second, at the ideal place in the history of the world, the man turned around and stared at Noah.

Right as the contents of Noah’s second and third and apparently fourth stomach came spewing out of his mouth with more force than any movie’s CGI fake-vomit ever thought about having.

Chris threw the remaining napkins at me and I began mopping every surface.

And we began to laugh.

Great heaves of laughter that didn’t stop until we got to the car, and kept cropping up randomly throughout the day.

Because it’s true. If they really commit and get super ridiculous and completely unbelievable, train wrecks are absolutely hilarious.

5 thoughts on “A Christmas Story.”