Really, it was all the old man’s fault.

He was ambling around the edge of the cliff at Weathington Park, offering to take everyone’s picture with their phone.

I don’t know if he was doing some sort of undercover operation to plant a tracking device on everyone’s phone or what, but he was quite insistent.

I was the only one on the ledge that day with a DSLR. I handed him my camera, which is pretty hefty compared to the variety of phones he’d been using.

“Whoa. Is this thing going to kick back?”

“Maybe a little. All you need to do is push this black button.”

I placed his finger on the button, then Chris and I posed at the cliff and smiled, somewhat plastically.

Old Man stared at the backside of my camera.

“I can’t see anything! Are you sure this thing is on?”

“Yes sir. You have to look in the the viewfinder.”

“The little hole at the top of the camera.”

“OOOOH. Okay. Say cheese! HOLY COW I DIDN’T KNOW THIS THING WAS A SEMI-AUTOMATIC! How many pictures did I just take?”

I quickly saved my camera from further misunderstandings and we moved on. Later, I looked at his photography portfolio.

Most of them contained my hand in front of my face, trying to arrest a bunch of stray strands that gathered there at just the wrong moment.

There was only one where my hand was just barely blurring. But the photo disagreed with me, as do most photos of myself these days. 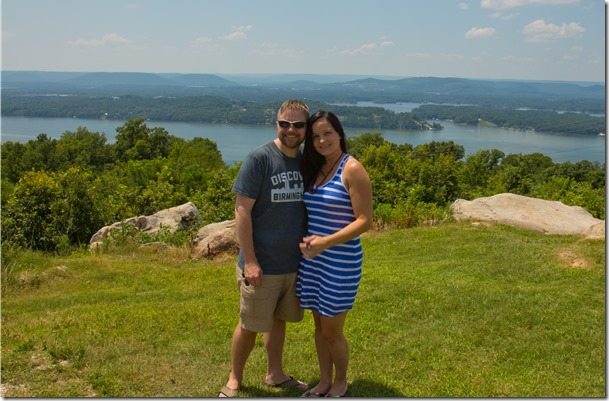 Granted, it wasn’t that bad of a picture. But for some reason it was the picture that I could see every one of the fifteen pounds I’ve gained in the past year. I can blame it on the medicine all I want, but it’s still there and it still bothers me.

I’ve tried to convince myself to exercise and get back to using Lose It a few times over the past year, but I lacked motivation, and was in general too tired from those same stupid medications to keep it up. And really, the real reason I need to exercise is not for vanity, but because Dysautonomia’s two main solutions are drinking ridiculous amounts of water and exercising regularly.

…But it’s counterintuitive since simply standing up can double my heart rate – it doesn’t exactly feel like running would be the best idea.

And also, the only two times I’ve ever been successful at losing weight also happened to be when I was nursing my children. And I can’t lactate on command, therefore I’ve been demotivated ever since.

But still. I knew it was possible.

Here were my before and after photos while nursing Noah: 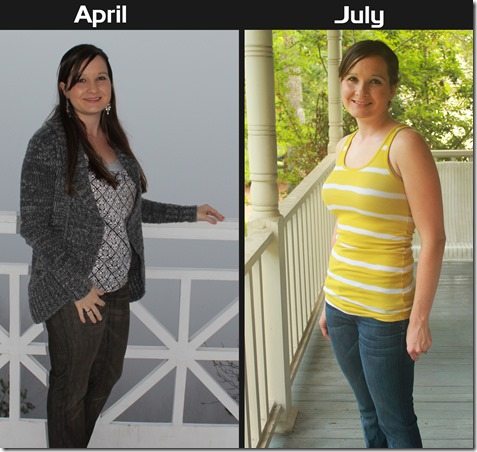 Making milk: Does the body good.

But it was time. It had to be done. With or without my mammary glands taking part.

We got home from that trip on Sunday, and on Monday I bought myself a FitBit.

(And Chris one, too, since he’s always a good sport to play along with my geek-motivation needs.)

By Tuesday morning I was unforgivably angry with myself for not getting one years ago. For someone who is motivated by charts and graphs, a FitBit is like finding and taking up residence in The Garden of Eden. 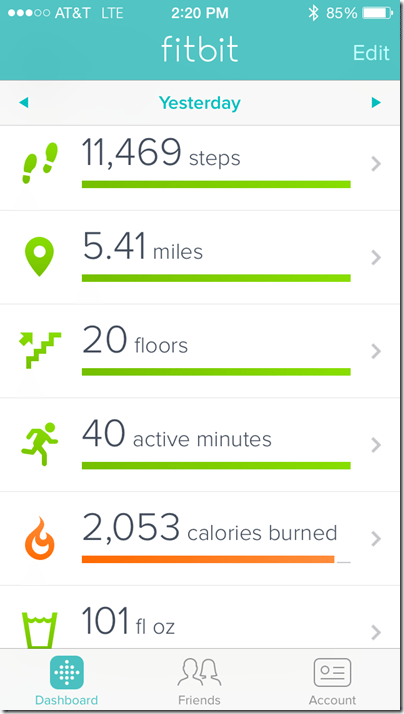 And that’s only half of the information it gives me. ANY TIME I WANT IT.

For those of you not familiar with FitBit, it’s a tiny clip-on gadget (or bracelet, if you prefer that choice) that tracks your steps, and by doing so extrapolates all of the above information (except the water – I am manually adding that) and makes it available to you in real-time on an app and a website. Which, since I would marry a spreadsheet if I could, translates into immediate gratification – a hard thing for me to get from exercise.

(And even the manual water entry is made super easy by standard measurements and a pretty little woman turning blue.) 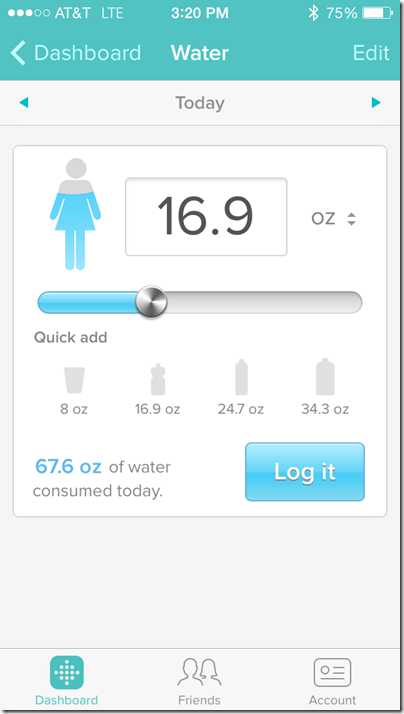 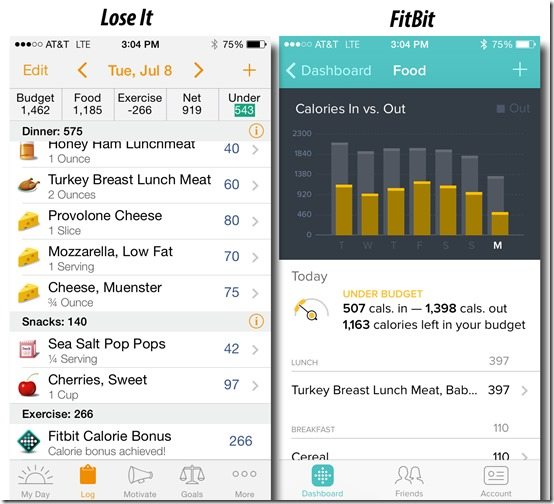 I know that FitBit is basically a glorified pedometer, but any organization that can take a simple tool and turn it into such a beautiful graphical representation of Doing The Right Thing is a hero in my books. Because I need goals. And I need to see how I achieved those goals. And better yet, I need to compete and beat everyone in my path.

(Until Chris ruins everything with his 14 mile Saturday morning runs and taunts me on Twitter.) 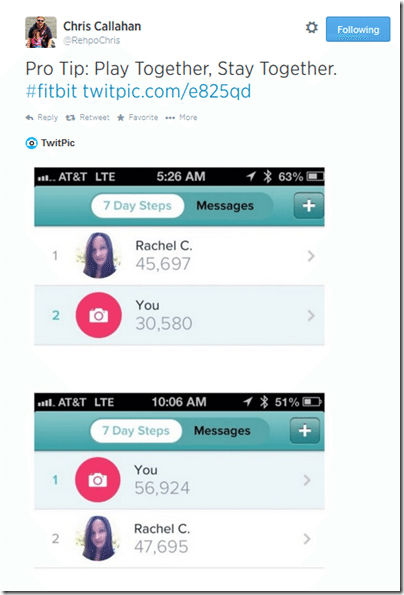 (But that’s exactly the kind of competition I need. Because by Monday morning, I had fought my way back on top.)

…And he thought he was so special because he runs a half-marathon every Saturday.

(Well, Motherhood plus an intense need to beat one’s husband.)

But back to FitBit. It gives you goals in every area that you could possibly want, offers beautiful and drill-downable charts and graphs of every kind, changes colors from blue to yellow to red to green as you achieve those goals, and allows you to compete with all your friends, and in general completes me. 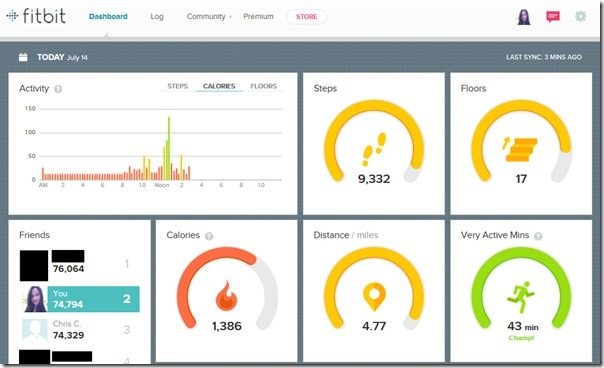 It EVEN offers a premium package where you can compare yourself to all the humans. UNIVERSAL BENCHMARKING.

I expect to break down and buy the expanded software within days.

It’s been a full week now, and I have felt fantastic six out of seven days, free of Dysautonomia symptoms. It could be a coincidence, or it could be because I finally found the right tool to reward me with pretty colors when I do the right thing.

At any rate, I’m hooked.

(But whether this pretty software makes up for my lack of lactation remains to be seen.)

If you have a FitBit and want to further my motivation by becoming my friend, my email address is graspingforobjectivity@gmail.com.

For the Record: I was not compensated by FitBit to write this nor did they ask me to nor do they know I’m writing it. But if they want to give me that premium package for free, I’d totally take it. FitBit? Are you listening?