Disclosure: By not closing out your browser window now, you are acknowledging and taking full responsibility for any mental or physical repercussions you may experience from reading the content contained herein.

I’ve never noticed how much the line art in my blog background looks like intestines. Have you?

So I had a colonoscopy and endoscopy Wednesday.

Or, as was listed next to my name on the whiteboard, I had a ↑↓.

Most people were just having a ↓, so I will admit that I felt a little special to have been chosen for a bi-directional procedure.

Because when you’re walking back to receive a pair of “surgical shorts” and a backless gown in order to have countless people see parts of you that you’ve never quite been able to see yourself, you have to take your pride where you can find it.

We all know what a colonoscopy is, but an endoscopy is basically the same thing, but starting in your mouth and ending, based on the soreness I’m still experiencing, somewhere in your stomach.

But let’s back up 36 hours. Because a colonoscopy wins the Kanye “Imma let you finish but this test is one of tha most life-invasive tests of all time” award.

And as such, I found myself, Monday night, at the grocery store having the most unsexy shopping event of my life.

Clear juices…Gatorade in a flavor I didn’t mind hating for the rest of my life…Chicken broth. To eat solo.

“Juicing would surely count as a liquid, right?”

I bought frozen peaches, grapes, and grapefruit juice. In hindsight (something there was a lot of this week), I’m pretty sure my frozen fruit smoothies did indeed break the rule, as they contained pulp.

But I really don’t give a rat’s…oh nevermind.

I arrived home with my groceries and surveyed with discomfort my diet for the next day.

I was not meant for this.

I was meant for chocolate and marshmallows and cheese. All of which technically could be melted down…

That night, I tossed and turned with apprehension. When I finally did sleep, I dreamed repeatedly of all five My Little Ponies preparing for and receiving colonoscopies. But they were oddly happy about it, prancing around on rainbows…

I’m sure they’ll cover that in Season Four.

The next morning, I woke up to half a dozen helpful signs, lovingly crafted in the wee hours of the morning by my adoring husband. 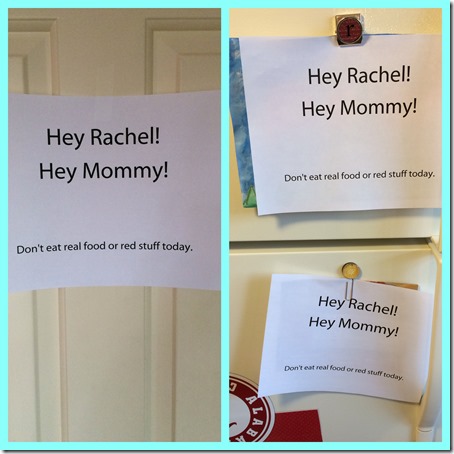 A little background: it had been bothering Ali that Chris never referred to me as “Rachel”, and she had been interrogating us both for days – as if the future of our marriage relied on it.

“I know you call her Mommy in front of us…but what do you call her when we’re not around?? AND WHAT DID YOU CALL HER BEFORE WE WERE BORN?!?”

I think the inclusion of my Christian name on those signs really helped Ali believe in us as a couple.

And they helped me, too – only once did I completely bypass the sign, go into the pantry, grab a snack and almost eat it before I remembered the illegalities of my current state.

I dutifully drank smoothies that morning, and finally busted out the Chicken Broth that afternoon.

And was shocked at how delicious it was.

Followed by immediate depression at the sad, sad statement of my life.

I liquid dieted until 5:30pm, when I began this, which, despite its very misleading name, is disappointingly NOT something that can be substituted for popcorn and Twizzlers. 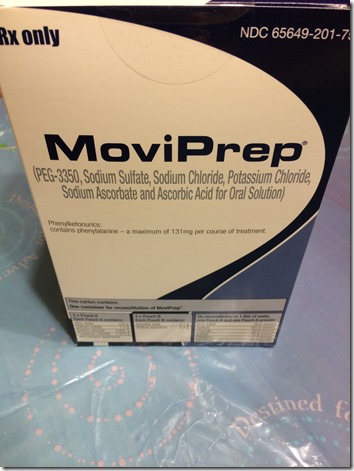 It’s sitting on Ali’s birthday party tablecloth. I’ll leave it up to your imagination what it was destined for.

MoviPrep consists of four powder packets that are to be mixed into water or Gatorade in two 32 ounce doses, creating A Liquid Which Can’t Be Named.

I chose Arctic Blast to be my first Gatorade I’d never touch again. 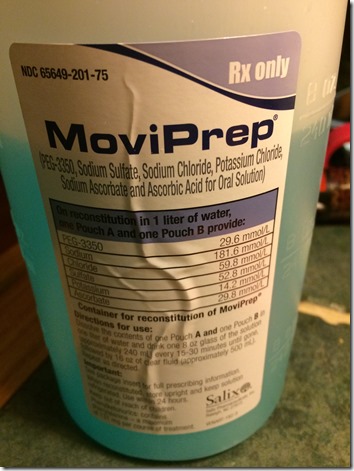 When mixed, it looked and tasted like toilet bowl cleaner mixed with urine.

Meanwhile, my darling husband, who had been searching the internet for ColonoscopyHacks, was thinking ahead again – perhaps too far this time. 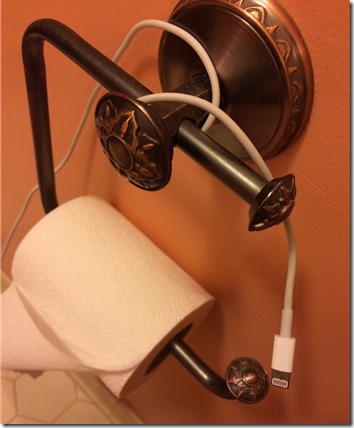 He also found this frightening piece of advice. 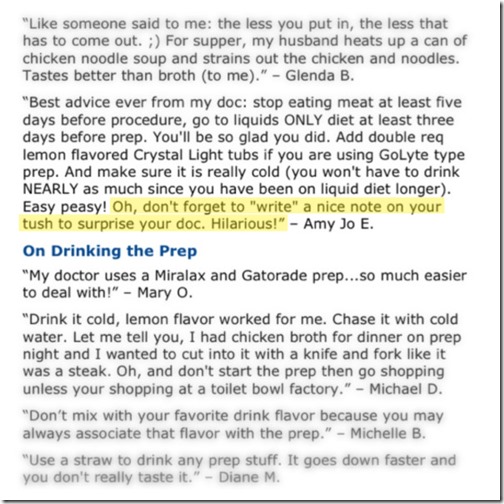 I do not want to know why she used quotation marks where she did.

At Midnight, I was instructed to drink the other 32 ounces. 32 Ounces which, in my opinion, were wholly unnecessary.

This time, I chose a green flavor. Which was very talented at keeping its color and transparency, I might add. 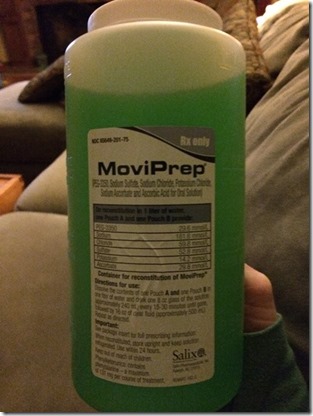 Surprisingly, it tasted a slight bit better in green, or perhaps I was so dehydrated that actual urine + cleanser would have been a savory treat by then.

D-Day. The lobby was so crowded that I had to share a settee with a woman I didn’t know. And the inhabitants were so old that Chris and I were the only ones looking at our phones – something I assumed only occurred in Nursing Homes and Piccadilly’s.

We got assigned a number, giving us the feeling of false anonymity. It’s not like we didn’t know what each other was there for. We were all about to be invaded in the most terrible of ways, yet relegated to being a number.

I was number eighteen.

And, after hearing the receptionist yell out, “Number Two!! NUMBER TWO!!!”, I couldn’t have been happier with my number.

Because no one should be forced into that number. Not here. Not now. Be human and skip it like the thirteenth floor.

I desperately attempted to maintain my personal space on that institutionally small settee until my number was announced a few years later.

I turned in my phone to Chris and plodded through the first room of ten curtained indignities.

I heard a guy with a SOUTHERN ACCENT (because there are southern accents and then there are SOUTHERN ACCENTS) bashfully tell his nurse, “Weyell golly – I wore mah naaace boots today, but didn’t think abawt wearin’ mah decent socks!! Sorrah ‘bout thayat!”

I shuddered at the shaming happening within each of those curtained cubbyholes and dreaded my own impending humiliation.

I was led me back to a room of only four curtains. Nurse Cindy introduced me to her trainee, a brand new first-day-on-the-jobber, then left us to begin the millennia of questions.

“Do you have dentures? Any family history of lung, liver, heart, hand, foot, knuckle, or eyebrow disease? Have you ever been a man?”

Then she got into the meat of the interrogation.

“Why did your doctor order these tests?”

“Because my bloodwork indicated Crohn’s Disease.”

“Have you had constipation or diarrhea? Wait a minute – CINDY!!!! HOW DO YOU SPELL DIARRHEA??”

Now I know it’s an unsavory word that is despised above all words except moist, but if you’re going to be a nurse in the Colonoscopy Center, YA MIGHT WANT TO LEARN HOW TO SPELL THAT ONE.

Then she left me.

Everyone says the prep is the worst part, but it’s actually laying in a curtained prison with no phone for over an hour.

Just as I was going to flee, leaving my robe and surgical shorts behind, someone came for me. She wheeled me to the procedure room, where brutal-looking tubing was shooting in every direction and Journey was blaring over the speakers.

Why not go ahead and have a track of Captain Picard proudly exclaiming “TO BOLDLY GO WHERE NO MAN HAS GONE BEFORE.”

The anesthetist then gave me the first drug while telling me the doctor would be in soon, and I’d be able to talk to him, but wouldn’t remember it. Which is the cruelest thing you can do to a paranoid member of society. I need to know what inanities I said. And if there’s ever a YouTube video crop up of that conversation, somebody’s getting sued.

Then I woke up in recovery, yelling over and over.

I continued yelling for a good ten minutes, as nurse after nurse brought me a warm blanket, piling them onto me until I looked like a misplaced soiled linens cart.

The curtain between me and my neighbor was open, and our faces were five feet apart. We were the same age. I was a recovery yeller, she was a recovery crier.

She felt my eyes on her and turned to me, but didn’t stop wailing.

And so, the crier and the yeller watched each other, through tears and shivers, both weirded out by the other one’s recovery tactics, yet bonding nonetheless.

Until one of the nurses shoved a blanket up around my neck and over my mouth to finally shut me up.

Epilogue: They took a set of horrifying full-color pictures of the inside of my colon and presented them to my husband (See? This post could have been worse.) Nothing was conclusive, but they took several biopsies and may have me swallow a camera if they don’t see what they expect to see. It’s possible that if I do have Crohn’s, it was that all along and never Dysautonomia. I have no preference, except for a correct and final diagnosis.

57 thoughts on “Innerspace: The Story of my Colonoscopy.”