Last week, I confessed yet another sad truth about my lacking in human decency. This time, it was with regards to bed-making: I don’t do it, my kids don’t do it, and I don’t do it for my kids.

I asked for your input – the situation needed to be brought to light, once and for all, and we all deserved to know if daily bed-making was a universally expected task.

And, much like you did on my child-bathing report, y’all stepped in and made me feel normal.

And I am here to relieve you all.

Because Bed-makers are not, after all, the majority.

First let’s look at an overview. 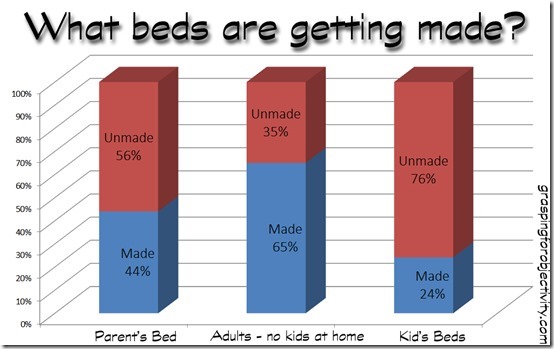 We can conclude by this chart that clearly, children are the problem.

(Just like when they tell us “I enjoyed every second of my children’s younger years!!”)

Now. Let’s have a bit of a breakdown when it comes to families with children still at home. 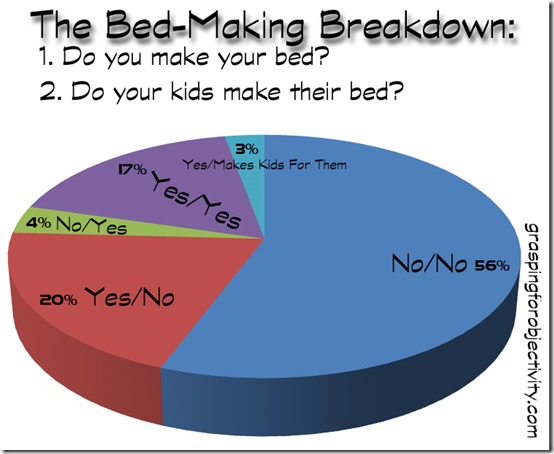 Based on the results of this survey, there are five types of families. We’ll discuss them in the order of most to least often occurring.

“The Normal” – This group includes me, of course, because I am the epitome of normal. Normal people do not make their beds nor require their children’s beds to be made, as they recognize that the amount of time wasted daily in such endeavors can be used much more properly – like, say, getting an extra five minutes of sleep. It should also be noted that some normal people have cited the scientific fact that bacteria can much more easily flourish in the dark confines of a made bed (this fantastic “medical” report explains this truth much more gruesomely.) Normal people comprise of 56% of the population.

“The Personally Neat” – This set of parents make their own beds for various reasons (because their husbands prefer/require it, or better, because their husbands make the bed themselves, or because they have a small bedroom and read somewhere that if they make their bed then 75% of their room would be clean, or because that’s the way they’ve always done it.) However, they see no need in fighting the battle to try and make their children make their beds. Many of these parents even explained that they do whatever they can to avoid ever entering their child’s room. Personally Neat people comprise of 20% of the population.

“The Ultimate Neat” – These people make their own beds and encourage/require their children to make theirs. They tend to feel that it is an important way to start the day, and that everything feels better if beds are made. Although not true in every case*, these types of people are also likely to bathe their children on a daily basis, not leave dishes in the sink, and vacuum their cats. Ultimate Neat people comprise of 17% of the population.

* It should be noted that a large number of responders in this category claimed to be not-at-all neat in the rest of their life. However, I’m assuming that this was a clever ruse so that I didn’t follow up by asking if they vacuumed their cat.

“The Hypocrite” – This subset of society do not make their own beds as they understand the ultimate pointlessness of such activities, but do see the value in giving their children a chore, or teaching their children the needed skill of bed-making. Clearly, their kids are too young to call their parents on this extreme injustice, or the parents are better than I at using the “I’m the parent I can do what I like” line. If I’m honest, I’m pretty jealous of this group’s ability to politic their household so fiercely. But they only comprise of 4% of the population.

“The Harmonious Neat-Seeker” – This group of people make their own beds and their children’s beds. They prefer the cleanliness of a house of beautiful beds, but do not want to fight the battle and/or take time out of their children’s sleep-cycle to make their children do it themselves. They prefer a lack of discord in their household and their familial relationships whenever possible. The smallest segment of society, this group only comprises of 3% of the population.

So. What can we conclude from this survey?

Except that if you forget to make up your bed next time you have company coming over, you have a 56% chance that your inaction will make them feel more normal.

17 thoughts on “On Bed-Making: A Scientific Study.”