A couple of months ago, I mentioned my favorite graffiti sighting in Birmingham, Moist. I have an appreciation for well-written, non-obscene graffiti, and found it to be rather brilliant that someone would take the most hated and eye-catching word in the human language and use it for their tag. Consequently, I keep an eye out for Moist wherever I go.

Because of that post, Moist also found me. And, perplexingly enough, seemed to appreciate my style of writing. He emailed me and we began corresponding – the graffiti artist and the homeschool mom. He typically keeps a low profile, but agreed to let me interview him via email. And, being the over-observant, insatiably curious person that I am, I found his stories to be riveting.

I am a firm believer in the fact that you don’t have to completely agree with someone to enjoy their writing – in fact, stories are often most interesting when someone is vastly different than you – which is why I enjoy the radio show This American Life so much. So, with that context in mind, I encourage you to take off your “graffiti is illegal and you shouldn’t deface property” hat for a moment and enjoy the stories of Moist.

(This will be a two-part series, because I’m saving the best story for a standalone post.) 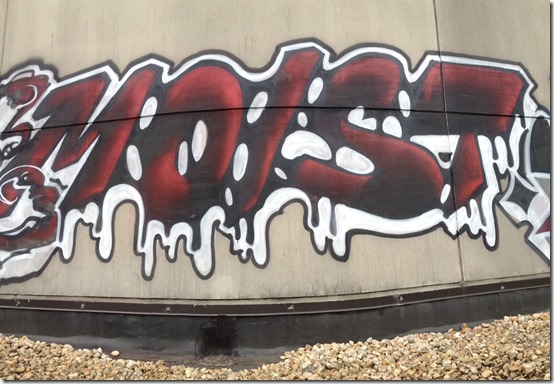 When did you first discover that you were Moist?

Well I went for a walk one day about four years ago when I just started getting into graffiti, I walked really far.

It started raining super hard and I was in Highland Park, and instead of running for cover, I just stood there in the rain. I watched people pack up and scatter in fear of getting wet like it’s going to ruin their lives or something. What’s the big deal with getting wet? Its water, we need it to survive, but oh no when it falls from the sky and lands on us we all trip out and run for cover.

So I just sat on a concrete stair and scratched the word MOIST into the step with a rock I found all while getting drenched. From then on I wrote MOIST.

I also love that so many people legitimately hate that word. It’s more likely to stick in peoples heads and more likely to be brought up in conversation. I love it when people hate it. It’s weird.

Coming from a sometimes fashion blogger, what do you wear when you’re illegally painting?

Dark blue and black clothes. And the occasional reflective vest with flashing LED lights that say “VANDALISM IN PROGRESS, ALERT THE AUTHORITIES!”

Do you vandalize on an empty stomach or do you eat a pre-game meal?

No one likes to be hungry. Yeah I make sure I have a satisfied stomach, sit in my floor, and do my leg and arm warm-ups. I wouldn’t want to pull a muscle whilst climbing razor wire fences or being chased by dogs.

Do you always feel moist, or is it more of an alter-ego?

Graffiti writing is a lifestyle. It’s an addiction like anything. I’ll just be hanging out somewhere and then realize I’ve written on a ton of stuff.

It happens with everything I look at, I picture how I could fit a straight letter onto it or a small marker tag. I think about the color contrast and which is the best color to make it stand out the most. I think about line of sight, where is the most efficient placement so that the most amount of people will see it. All those thoughts happen involuntarily.

Everyone has their things they like, people in Alabama love football, extreme fans will literally harm other human beings because of team rivalry and all that nonsense.

I’m into graffiti, it makes me feel. I need that. Just because I hate football doesn’t make me want to run out onto a football field with a knife trying to deflate the ball. But yeah, its always there, whenever I go anywhere, before I leave my house, I grab my keys, wallet, phone, and a pilot marker.

Does your family know you’re moist?

I don’t have family in Birmingham, they don’t really know what I’m up to, and they wouldn’t really care either.

How do you choose your targets?

I like your questions. I get on Google maps and place a bunch of pins all over the city that spell out my name then I try to hit them all. If it’s a spot that gets a lot of attention, then it’s good, or if it looks really cool in a photo, like an old falling apart abandoned building that most people wouldn’t think twice about.

Font choice is crucial in my world and yours. How do you go about choosing a moist typeface?

In the city, I really enjoy simple readable letters. If you can read it while cruising 150mph and only seeing it for a tenth of a second, it’s cool with me.

What is the craziest spot you’ve ever painted?

I would have to say the McWane building seen from I-20/59. 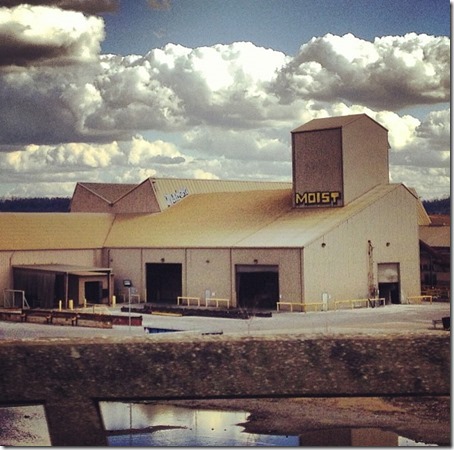 I had pictured hitting that spot years ago, way before it was even closed. Every time I passed that part of the highway, I would think about how insane it would be to hit that building.

Me and this dude ARUHI climbed up some old rusted pipes on the side of this monstrous warehouse really late at night after the dew was settling. Everything was soaking wet from the dew, we shimmied across the steep inclined sheet metal roof to get to this spot. After I got up there I knew I couldn’t turn back just because it was soaking wet. I was already on the roof, I had to do it. Aruhi stopped at one point where he was going to paint but I had to keep going across the ridge to get to mine.

I very carefully worked my way around to the front wall. If i were to slip at all, I would have definitely slid off the edge of the building and broke a ton of bones or even died. No question about that one. I’d be a goner for sure. There were small screws holding down the sheet metal, so I stood on them to help get a grip. That’s basically it. Do or die.

What time of day night do you most often create moisture?

The 36th hour of every day.

I get out whenever really. Any time of the day.

What would you say if you got caught?

Absolutely nothing. My lawyer would kill me otherwise. 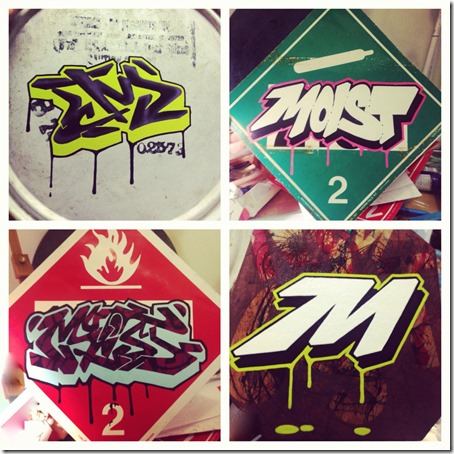 What’s the closest you’ve ever gotten to getting caught?

Well I won’t tell the closest because I don’t want anyone knowing how we made it out, but one time Blaes and I were hitting a spot on this old abandoned building in north Birmingham. It was right off the side of the street, super visible. Midway through the fill a cop spotted us and was all on the loud speaker telling us to freeze and all that generic “don’t go anywhere so we can catch you” stuff, we bolted across the street and ran through some rough looking neighborhood. We spotted this what we thought was abandoned house and kicked the door open, I know that sounds like something from a movie but it wasn’t locked, there was just a bunch of garbage in the way.

We ran inside, closed the door and listened for the cops, they definitely knew we were somewhere in that area so we had to get out. I didn’t want to use a light from my phone or anything that would be visible in any way, so we crept along through all the garbage to try and get to the backdoor. There was so much trash in there it was ridiculous, it smelled awful too. We get to the back of the house and surprisingly enough there wasn’t even a back door, the entire back wall wasn’t there, it just opened to the backyard.

We walked to the back of the house and there were two crackhead looking dudes just chilling in lawn chairs with their feet propped up on one of those big spools they use for industrial wire. I don’t know how they didn’t hear us kick that door open. We walked out the back and they stood up and started a huge fuss.

I know what he was trying to say. Basically “What are you doing in our house? You shouldn’t be here,” but what he actually said was, “WHA YAWL DURIN EN ER HAWSE!? YEH SHUDDINT BEH EN HEEAH.” I said we weren’t looking for trouble, we’re so sorry blah blah we’re leaving. We try to get past them, then the quiet crackhead lunged at me, he thought I had money or something he could use. “WHUTCHA GOT EN DEM POKETS BOY?”

He grabbed my jacket and as soon as he touched me, Blaes punched that dude in the face so hard. It didn’t knock him out or anything but he let go of my jacket. Then we climbed through some more garbage and hopped over a short backyard style fence and ran down the alley as the yells from the angry crackheads faded behind us. We ended up finding this overgrown backyard that was completely blocked from street view and hid in there for about three hours. Needless to say we walked the long safe route back to the truck. 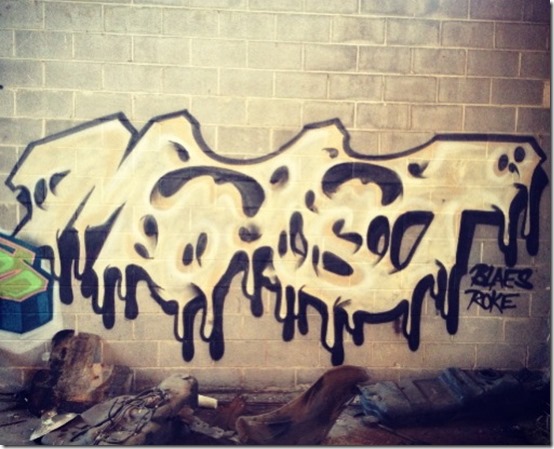 The second part of this interview can be found here.

57 thoughts on “Moist: The Interview.”