I do adore Project Runway.

As long as Tim Gunn is there, I will be a lifelong fan.

(Same goes for Sofia the First. He’s the star of that show and Sofia knows it.)

However, last week’s episode was a tiny bit perplexing, and has made me seriously rethink the perception that the rest of the world holds of my little universe.

I’m not surprised that it happened, as our southern department store, Belk, is the sponsor of the accessories wall this year.

(A fact which will not allow me to go any farther without pointing out that the Parisian Accessories Wall would’ve sounded a million times better. Stupid, stupid, Belk. How could you jettison such a lovely name in exchange for a bodily function??)

(I love Belk. I shop at Belk. I just hate them for ditching the name Parisian when they bought out Birmingham’s Best Department Store. And I always will. And I will be required to take a moment to harp on this each and every time I mention Belk for the rest of my life.)

Back to Project Runway.

“Design a dress for The Modern Southern Woman.”

Which prompted Heidi Klum to actually say “Hey Y’all!” in all the glory of her German Accent.

But the reaction to the challenge from nearly everyone on the show was as mystified as if they’d been asked to design for The Modern Young Klingon.

Because apparently, we’re a completely different breed of human than rest of the world.

“My dress is for a girl going to a cotillion. Because that’s like a thing, right? Not just in movies?” 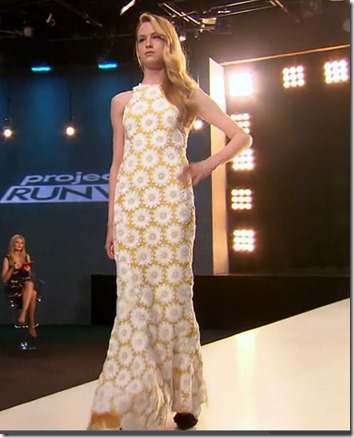 (Oh yes. I got to a cotillion at least once a week. Me in my finest hoop gown and Chris in his tails.)

“I’m really thinking about how NOT to make this Mother of the Bride.” 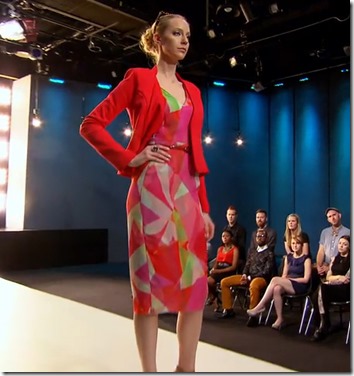 (Perhaps instead you should have thought about how NOT to make hideous.)

And half the group designed out of plaid. Because that’s what all us farm workers wear while we ride our tractor with a tasty hay stem sticking out the side of our mouth. 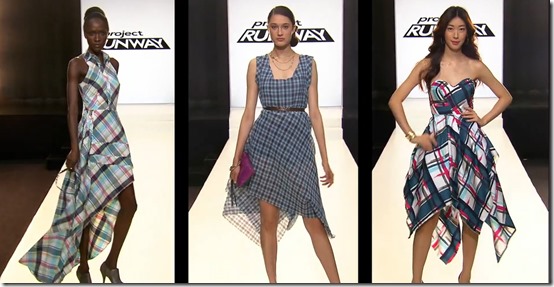 The designer of the dress on the left won the challenge, with his faux-Laura-Ingalls-Wilder-apron and plaid-right-out-of-the-Ralph-Lauren-toddler-boys section.

And with regards to the sweetheart neckline plaid dress on the right, Tim and the designer had the following conversation:

Tim: “And this is eveningwear?”

Designer: “It’s day. But I mean it’s definitely not a picnic dress or for going to the forest…or whatever they do down there.”

Is The South really perceived as this foreign of a place?

Do people actually think that we live so differently than the entire rest of the United States?

No wonder y’all read my blog. You’re all like, “Hey! Here’s a Modern Southern Woman that doesn’t spend all of her time milking cows and picking tobacco! Who knew southerners were so normal?”

“Hey! Did you know they had actual cities in the South? Me neither, until this blogger I follow got obsessed with sunset photos and showed pictures of her city. They even have buildings! Made out of metal and glass and everything!”

“Guys. You’re not going to believe this, but did you know that Southerners actually don’t wear aprons and gingham dresses anymore? They actually wear good blue jeans these days! And not even with giant bonnets! Who knew, right?”

”This blogger I follow homeschools. I find that strange, but it’s probably because she didn’t want her kid going to the one-room schoolhouse and having to share the outhouse with so many other children. I bet that’d be awful.”

“Dude! Apparently they actually have internet in the South now!! Then again, maybe these southern bloggers are just going to the library.”

Or, maybe it’s the opposite.

Maybe you all weren’t as ignorant as the Project Runway designers, and instead, I’ve ruined you. And now you’re like,

“Wow! I thought the South was totally normal until I started reading this blog and found out about their football and their monograms and their smock and their park rules and their bank love notes and relationship soliciations and their toilet worms and their bare-butted statues and their willingness to talk about their kid’s tub poop. They don’t even know what Hipsters are! The South is SO WEIRD!”

Maybe we are as weird as they think we are.

Either way, thanks for reading.

62 thoughts on “The Foreign Universe of The South.”