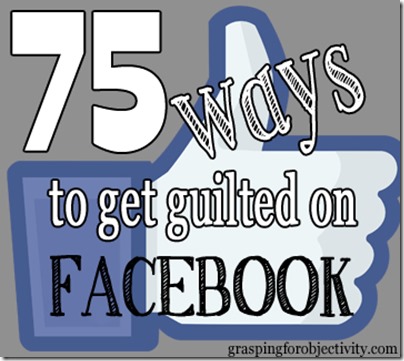 This list started months ago as a text vomit stream between my friend Ashley and me. And we decided that the world should be allowed into our heads.

How can Facebook give you a Guilt Trip? Let us count the ways.

1. By buying organic. It’s too expensive and you’re selfishly robbing money for your own family from starving people in other countries that need it more.

2. By not buying organic. You are feeding your family processed, pesticide ridden foods that will ultimately cause untimely sickness and death.

3. By being liberal. Don’t you know they’re ripping the country apart?

4. By being conservative. Don’t you know they’re ripping the country apart?

5. By being politically apathetic. Don’t you know you’re allowing the country to crumble into ruin?

6. By being immodest or letting your daughters do the same. How could you do that to innocent men?

7. By feeling obligated to the idea of modesty – geez. It’s not your responsibility.

9. By waking up at 5 for a 3 hour spin class. You’re obviously exercise obsessed.

10. By not having pets for the sake of your children. They add so much quality to a child’s life!

11. By having pets concurrently with children. Don’t you know that cats eat the faces off of sleeping babies?

12. By not spending hundreds of dollars on your kid’s Halloween Costumes.

16. Or Fourth of July…Baskets? Give them the childhood they deserve!

17. By spending hundreds of dollars on any of the above. You’re raising spoiled brats and wasting your money!

18. By playing on your phone too much. You’re slowly sinking into the quicksand of having no actual human interaction, and you’re obviously missing your kid’s entire childhood!

19. By making others feel guilty about playing on their phone too much. It’s the world we live in – loosen up for crying out loud.

20. By not eating Greek Yogurt. It is the key to health, happiness, and regularity.

21. By eating Greek Yogurt. Don’t you know about its terrible environmental byproducts? And specialized yogurt mold?? It’ll probably bubble and hiss at you when you open it!

22. By not talking about how wonderful your spouse is at least three times a week on Facebook. Do you even care about your marriage anymore?

23. By talking about how wonderful your spouse is three times a week on Facebook. Don’t you know you’re making people nauseous?

25. By not putting your kid’s pictures on Facebook – don’t you know that people need to see those precious faces? You have a duty!

26. By not caring about the decline of Miley Cyrus’ morals, and how it may very well impact your children’s future.

27. By caring about Miley Cyrus – don’t you know there’s a civil war in Syria?

28. By caring about Miley Cyrus – what about Robin Thicke?! Who’s holding him accountable??

29. By caring about Robin Thicke and Miley Cyrus – don’t you know there’s a civil war in Syria?

30. By not liking a picture of Jesus that instructs you to like if you…love your kids? 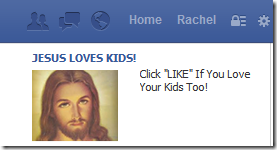 I wish I were making this one up.

31. By not doing a daily original craft with your children to show off to the world.

32. By doing a daily original craft with your children to show off to the world – don’t you know there are mothers barely surviving out there?

33. By not enjoying every second of your children’s lives – it just goes by so fast!

34. By attempting to enjoy every second of your children’s lives – don’t you know about chronos and kairos time??

35. By suggesting to others that they should enjoy every second of their children’s lives – have a heart, that’s ludicrous!

37. By not spending enough time on Pinterest – don’t you know there are teacher gifts to make, hair to chalk-color in rainbow-order, and animal-shaped food plates to sculpt to make your kid’s lives complete?

39. By shopping at Aldi – they sell horsemeat!

40. By eating at Taco Bell – they sell horsemeat tacos and you’ll probably find hoof fragments, too!

42. By not eating at McDonalds. Don’t you know you’re sheltering your children and turning them into hopeless hipsters?

43. By not voting for your friend’s slightly-blurry kid in the Cutest Baby Contest – they could have won $100 if it weren’t for you!

44. By not sharing your friend’s slightly-blurry kid in the Cutest Baby Contest with all of your friends – they need your help to collect their rightful $100!

45. By not voting for your favorite disease to win a million dollars from a giant corporation.

46. By not voting for your favorite blogger to win each and every possible blog award out there.

47. Because of the fact that your kid didn’t serenade you with “You are my Sunshine” when you woke him or her up this morning – clearly you’re not nurturing enough.

48. Also? They are obviously behind on their verbal skills. And are they expressing emotion yet? Call the Pediatrician stat. 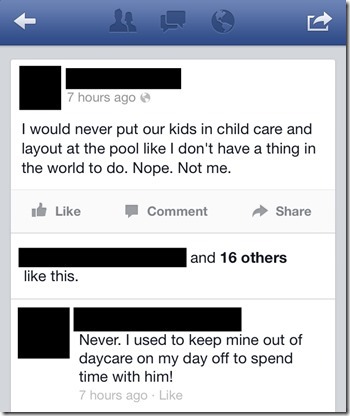 50. By playing Candy Crush. What a colossal waste of money and intellect, dude!

51. By not playing Candy Crush and not being willing to help your friends in their important game. Um, selfish!

52. By being addicted to Candy Crush. You know the British have a rehab facility for that, right?

53. By not being a runner. And you call yourself healthy?

54. By not being a football fan. Why do you even have a Facebook Account in the fall?

55. By being a football fan and daring to mention it. You just got hidden by hordes of angry non-fans, and their Facebook status is now all about what a pain it is to hide all of you EVERY. STINKING. YEAR.

56. By not posting about your anniversary (along with a lovely soliloquy about your spouse.)

57. By not answering all of those “Happy Birthday” messages. And likes are for the lazy.

58. By sheltering your teenagers. They’re totally going to be on the Molly as soon as they go to college.

59. By letting your teenagers run wild. They’re probably on the Molly right now.

60. By not knowing what Molly is. Know your drugs or you won’t have a clue when your tweens are on them!

61. By overdisciplining your small children – let them be kids! Don’t make them robots!

62. By underdisciplining your small children – those kids at the restaurant once drove a family mad!

63. By vaccinating your children. Don’t you know how dangerous that is? They could DIE!

64. By not vaccinating your children. Don’t you know how dangerous that is? They could DIE!

65. By having too few kids. The world will never change if we don’t populate it with like-minded people!

66. By having too many kids – They’ll stretch you too thin and you won’t realize when the oldest is on the Molly, especially since you don’t know what Molly is!

67. By dressing your children in designer clothes. What a waste of money!

68. By not dressing your children in designer clothes – don’t you know how waif-like they look in Faded Glory?

69. By shopping at Wal-Mart. And here’s a 100-Point Case on why you shouldn’t. And don’t you know how they treat employees??

70. By shopping at Target. It’s OWNED by the FRENCH!

71. By boycotting Target. It’s not a French company and the French aren’t the devil anyway. Don’t you use Snopes?!?

72. By not getting around to scanning in all of your old photos so that you too can take part in Throwback Thursday. And Flashback Friday!

73. By drinking a Mountain Dew. It has sugar, high fructose corn syrup, and brominated vegetable oil! It will give you cancer and rot your entrails! And this one time, in Iowa, a guy opened his can of Mountain Dew and there was a human FINGER inside. Ew.

74. By not drinking Mountain Dew. Geez. Relax a little and live.

75. By realizing you wasted your precious time reading this post. Thanks to whoever shared it on that devil the Facebook.