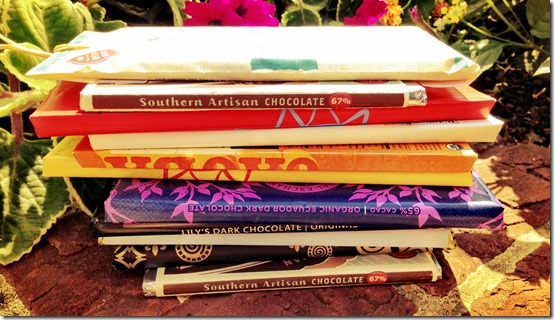 So I know that I was really mean, cruel, and otherwise horrible to you guys a few weeks ago.

You know, when I dangled my discovery of artisan chocolate in your faces. Without giving you any advice on how to satiate your new need unless you live in Atlanta or Asheville.

(And as far as I can tell, I have zero readers in either city. Apparently I’m not popular in A-named cities.)

Anyway. It was wrong, and I realize that.

However, it was hard on me, too. Because I ate all of my chocolate from Atlanta, and I also saw no way of satiating my new need.

However, I did some research. And I took notes.

I found out that, although we do not have a local chocolatier like I my heart desires, there are places in town (and most likely in your town as well) to buy artisan chocolate.

Here are a few points I’d like to make first:

1. Yes, artisan chocolate is more expensive (the bars I bought were between $2-6 each, most around $3.50.) But you don’t need as much. Chris and I have split a bar every night, and we don’t even always finish our half bar. The richness satisfies so thoroughly that you’re eating less, and therefore saving calories.

2. Be prepared for this chocolate to impact your body chemistry. I am a firm believer that we’ve all been eating severely watered down genetic strains of chocolate, and the real stuff is powerful.

3. You can get artisan chocolates with mix-ins, or just pure chocolate. Although we have come to prefer the pure chocolates, the ones with the mix-ins are good also. Some chocolates call them “nibs” – they can be cocoa bean pieces, vanilla pieces, fruit pieces, or even pepper pieces. I recommend experimenting to narrow down your preferences.

4. Although you can get artisan chocolate in milk flavors, the dark chocolates are something special. Even if you’ve never liked dark chocolate, it’s worth trying, because real dark is nothing like “Hershey’s Special Dark” – I promise.

(We did not try any milk chocolates. Call us snobs. That’s fine.)

If I indeed did birth a cacao need inside of you, you should have at least one of these stores in your city, and I also found some of them online (although you’ll do better to buy in store – shipping temperatures are likely to hurt the quality.)

My first was to Earth Fare, a new organic grocery store in town. Here is what I bought:

In order of our favorite to least favorite, here are how these fared:

1. TCHO “Nutty” – This chocolate was mind-blowing. Still one of my favorites, it had a nutty taste profile, but had zero nuts in it – it was just the natural flavors of the cacao beans. It was rich in flavor and luxurious, but completely smooth.

2. TCHO “Chocolatey” – This one was also fantastic. Smooth and dark, but not at all chalky like some dark chocolates can get. If you don’t like a nutty tone, this is the one for you.

3. Alter Eco Dark Twist – This bar actually has crystallized orange peels in the chocolate. It was different and a fun flavor, when you’re not in the mood for a simple chocolate.

4. Green & Black’s – This company recently got bought out by Kraft, and I learned at Atlanta Food & Wine that whenever a big company buys out a small chocolatier, they always replace the artisan chocolate with “stock” chocolate. So I was prepared for it to taste regular old chocolate, and that could have affected my opinion. But it was still good – very dark but very smooth.

5. Theo 85% – This one was too dark, but I did end up liking Theo later in the experiment.

6. Alter Eco Dark Blackout – This bar was just too dark. Somewhat like eating cocoa out of the can.

7. Chocolove – I really thought I was going to like Chocolove (I had heard good things), but was very unimpressed. Not sure why, but I have bought another bar to try for a second chance.

I realized after this trip that perhaps I was buying too dark. I love dark chocolate (and I believe everyone should, just like everyone should eat their steaks rare), but I decided I would keep it at 75% or below.

My next stop was Publix, at Chris’ suggestion. I didn’t think that a regular grocery store would have artisan chocolate, but they had a better selection than I imagined. Here’s what I bought: 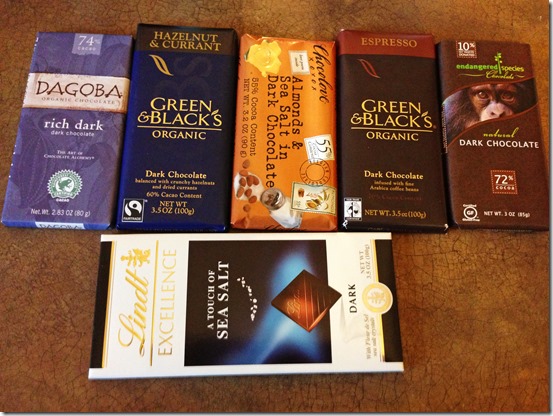 We haven’t eaten the Chocolove or Lindt yet (although we’ve had Lindt plenty of times in the past, I wanted to see how it stacked up against the more boutique brands), but of the ones we have eaten, here’s what I thought:

1.Dagoba – This bar was perfection. I adored it. It was exactly what it claimed: rich and dark. Not a trace of bitterness – all smooth chocolate. It also had a quote on the inside of the wrapper that said “You can deprive the body but the soul needs chocolate.” I agree.

2. Endangered Species Chocolate – this bar was good, but almost too rich for my taste.

3. Green & Black’s – again, it wasn’t bad. It was smooth, dark, and still way better than Hershey’s, but (at least by power of suggestion) can’t compete with the boutique brands.

So although Publix’s selection wasn’t as good, it’s doable in a pinch.

However, I was shocked when I hit the choco-jackpot at Whole Foods.

Look at their chocolate aisle!!! 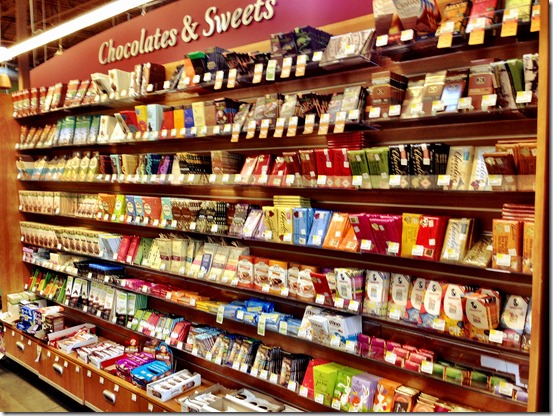 Look how much money I spent! All in the name of research. For you guys. You can send me thank you cards later. 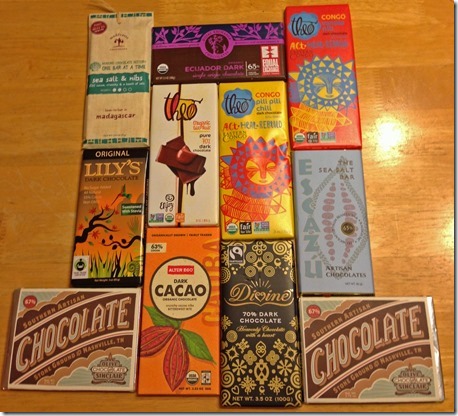 This collection included some stunning chocolate, too. Chris’ absolute favorite was in this batch, so I’m going to list it first.

1. Equal Exchange Ecuador Dark (The top middle bar) – Chris raved about it. He had enjoyed most of our prior experimentation, but this one was special. It was very smooth without a hint of chalkiness, and was sweet in spite of it’s darkness. Chris described it as “having the richness of brownie batter.” This was also a single origin chocolate, which is supposed to make the flavor much better.

2. Madecasse Madagascar Sea Salt and Nibs (top left) – This company is owned by former peace corps volunteers who wanted to do more for Madagascar. So not only do they buy their beans there, but they actually have their factory and make their chocolate IN Madagascar – something that is quite rare! Their chocolate was delicious, too. The cacao bean nibs had a coffee bean quality.

3. Divine Chocolate – This one was very good. Smooth and thick, but still very dark. It had a richness that was very satisfying.

4. Olive and Sinclair Southern Artisan Chocolate (the bottom right and left bar) – this one reminded me of the ones I had in Atlanta, which was interesting since Olive and Sinclair is in Nashville. They claim to be the first Southern Artisan Chocolatier. They say that the defining ingredient of southern chocolate is brown sugar, and you can definitely taste the hint of molasses in the bars.

5. Theo Pure 70% – I think this bar would be the easiest to take if you normally don’t like dark chocolate. It was the smoothest chocolate flavor we’ve tried.

6. Theo Congo Vanilla Nib – This one had crunchy bits of vanilla mixed into the smooth chocolate. Great for when you want a little something extra in your chocolate.

7. Lily’s Dark Chocolate with Stevia – I got this bar as an experiment because it was low-cal, sweetened with Stevia instead of sugar. It really wasn’t bad! It didn’t have a sweetener aftertaste, but it also had a less rich flavor than the others.

7. Escazu – Although I was excited about this one because it was another southern chocolate (from Raleigh), Chris and I actually both strongly disliked this bar – neither of us came close to finishing it! It had a very strange after taste and really left an unpleasant coating on our tongues.

So. If you find yourself in a place with all of these chocolates, here is our top ten list, in order of preference: 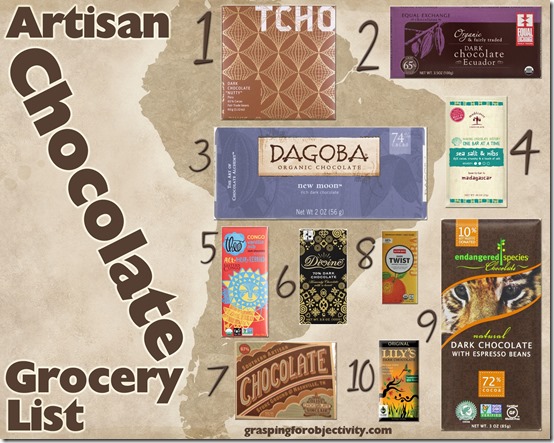 But of course, if you can get your hands on a locally produced chocolate, like those I ate in Atlanta, I am fairly certain that it will be the best experience your tongue has ever had.

39 thoughts on “On Sustaining a Cacao Habit: A Guide to Artisan Chocolate.”