It all started with the Orlando Airport.

We had every intention of taking all of your fantastic Disney advice, but Orlando’s airport did us in.

Okay, really it started with the Birmingham airport, but I have fonder feelings toward my own airport than those of other municipalities, so I think I’ll begin the blame at the Orlando airport. 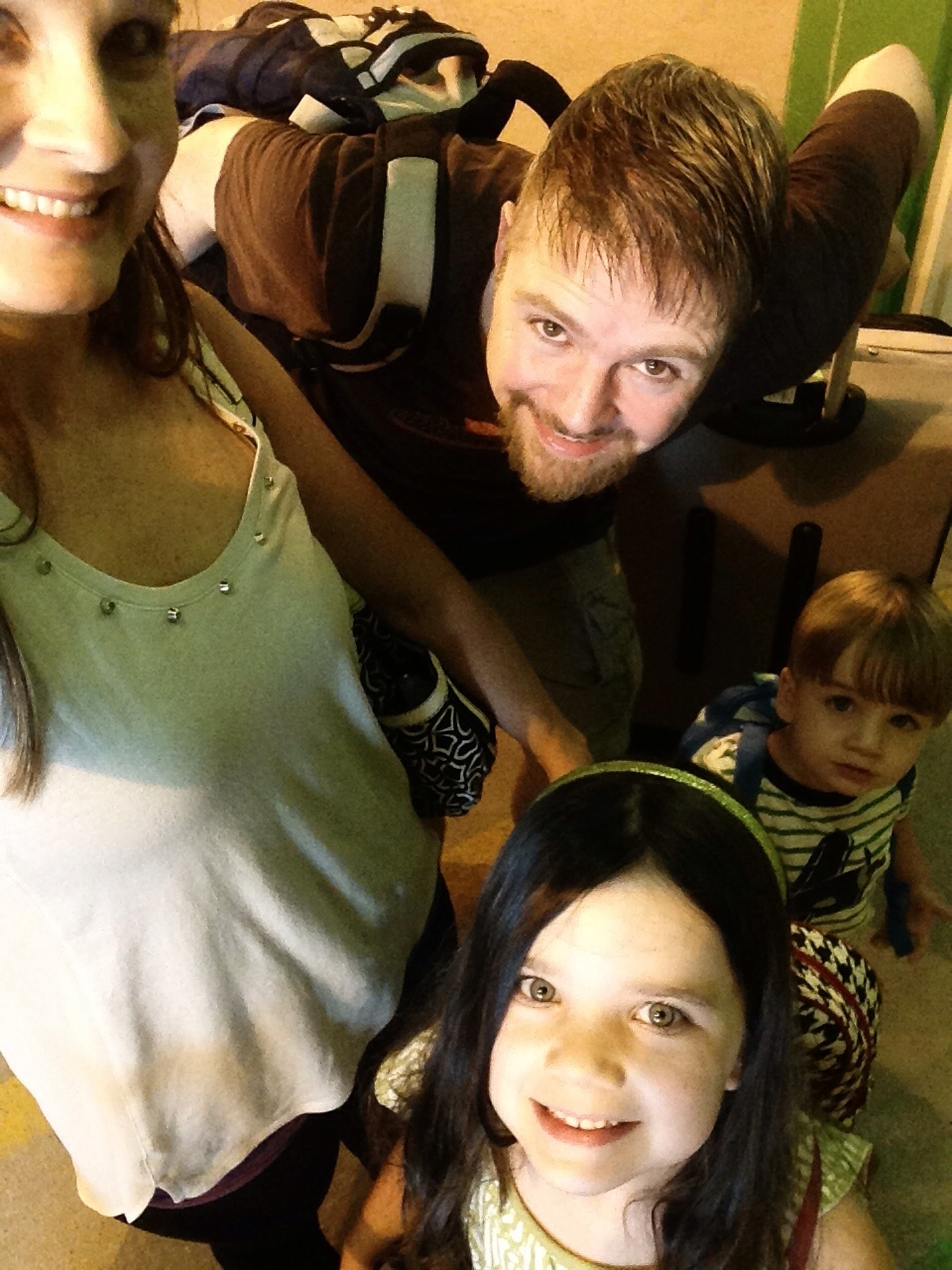 Us, looking optimistic upon arrival at the Birmingham Airport.

Our flight was delayed slightly, thanks to the lovely weather that plagued the south for the Fourth of July weekend. We were supposed to leave Birmingham at 6:05 (Central) Wednesday night and arrive in Orlando at 8:35 (Eastern), giving us a decent window to get a rental car and make it to our hotel in time for the kids to get a good night’s sleep before an exciting day at Disney.

But our flight was delayed.

The bad thing about this was that it gave Noah the opportunity to collect every germ in the Birmingham Airport. 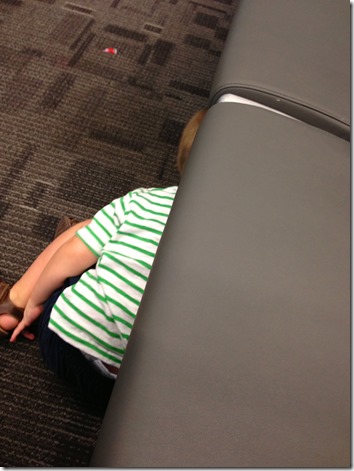 The good thing was that he was not able to wait long enough to achieve what I know he had been waiting for, the pinnacle of toddler success, something I predicted (albeit with a typo) to a friend earlier that day: 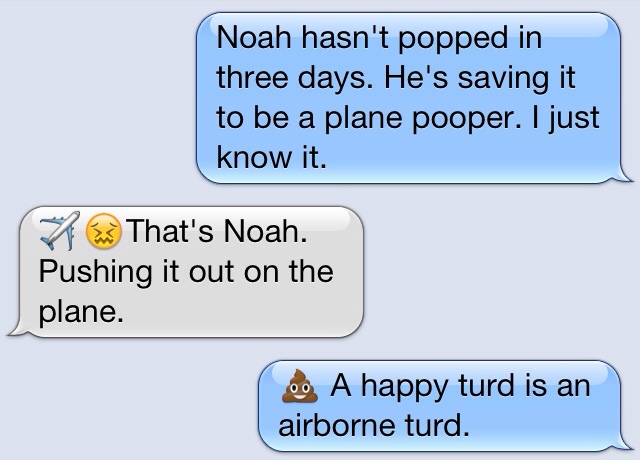 He tried to wait. But alas, thanks to the flight delay, he managed to only succeed in being an airport pooper, and not join the Mile High Poop Club.

We landed in Orlando around 9:15. Which still didn’t feel too bad, and the kids were so excited about flying that there was no malaise to be had. 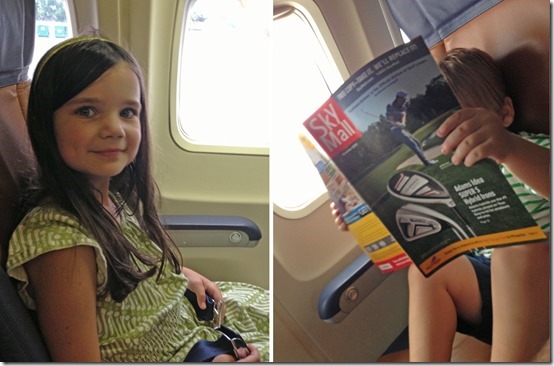 But then we walked to baggage claim.

Which appeared to be a refugee camp. Or the Super Dome during Hurricane Katrina.

People strewn everywhere, looking as if they hadn’t eaten in days, groveling on the floor and loudly exclaiming how horrible the Orlando Airport was.

We quickly gathered that the baggage ramp had been closed approximately a half-millennia due to lightning.

(But yet our plane flew. Unsettling.)

At the one carousel to which we were assigned (out of the dozens of carousels in operation), there were NINE flight’s worth of passengers camped out, doing rain dances for their luggage, opening military food rations, and considering which one of the other passengers they planned to skin first when the food ran out.

Also, there was the guy with the unbelievable ear hair. A thick, impenetrable forest of black hair engulfing the entire outer rim of his ear. There is no possible way he could have heard through that ear bush, so the only reasonable assumption was that he had been waiting so long for his luggage (which housed his military-grade razor) that he’d grown dual EarBeards.

Chris quickly realized that he would be fighting with many of these people for rental cars as soon as that carousel started spinning, so he took Noah and left me with Ali and my friend Amanda (who travelled with us) to wait for the bags.

We staked out our spot at Carousel 12 with the rest of Gitmo and watched hopefully. After about thirty minutes, the first bags came around. There was palpable hope in the air, as people visualized what the outside world must look like.

Fifty or so bags made a loop, with very few people claiming them. I hypothesized that their strength was too weak to retrieve them.

And then the carousel came to a halt.

Groans and screams of death filled the air.

Ten minutes later, a voice on the intercom. “We regret to inform you that Carousel 12 is having problems. We are trying to get it restarted. Please bear with us, and if you are standing on the carousel, please get off.”

I began looking around. WHO THE PHLEGM IS STANDING ON THE CAROUSEL??!!

I saw no one standing, but about a half-dozen people sitting. On the Carousel. The very Carousel that offers us freedom. If only they would MOVE THEIR BUTTS.

Intercom. “We can see you standing on the carousels. Please move so we can restart the carousel.”

I looked wildly around for the voice so that I could teach them the difference between sitting and standing, because clearly these people were staying on a technicality.

More trudging minutes passed, with people still sitting upon the broken carousel. Please recall that I was trying to keep hold of and entertain a six-year-old amidst the writhing throngs of malcontents.

Intercom. “For those waiting for luggage from flight 34 from Birmingham, please go to Carousel 14.”

We hauled off to an also-stopped Carousel 14, which housed five more flight’s worth of passengers, looking not quite as pallid as Camp 12, but definitely on their way.

A few minutes in, Carousel 14 began moving luggage. People were actually finding their bags! And leaving Airport Hell! We had hope.

Our wait once again became interminable. At one point, I sprinted Ali out to Circling-The-Airport-Chris, because she was DONE.

Finally, finally, FINALLY, we got our luggage.

But it was too late. Literally.

By the time we got to our hotel, it was past midnight. And midnight for two small children is no easy feat to overcome.

So we decided to let them sleep in, and we would Disney as casually as possible the next day. And hey! If we went late enough, maybe we could stay late for fireworks.

So the next morning, we all got going quicker than I expected. We knew the park opened at 10, it was inexplicably a “green” crowd day (considering it was the 4th of July), all of the park apps showed light crowds and short waits, so we headed to Disney at 10:45, after letting the kids have a clueless, groggy breakfast. 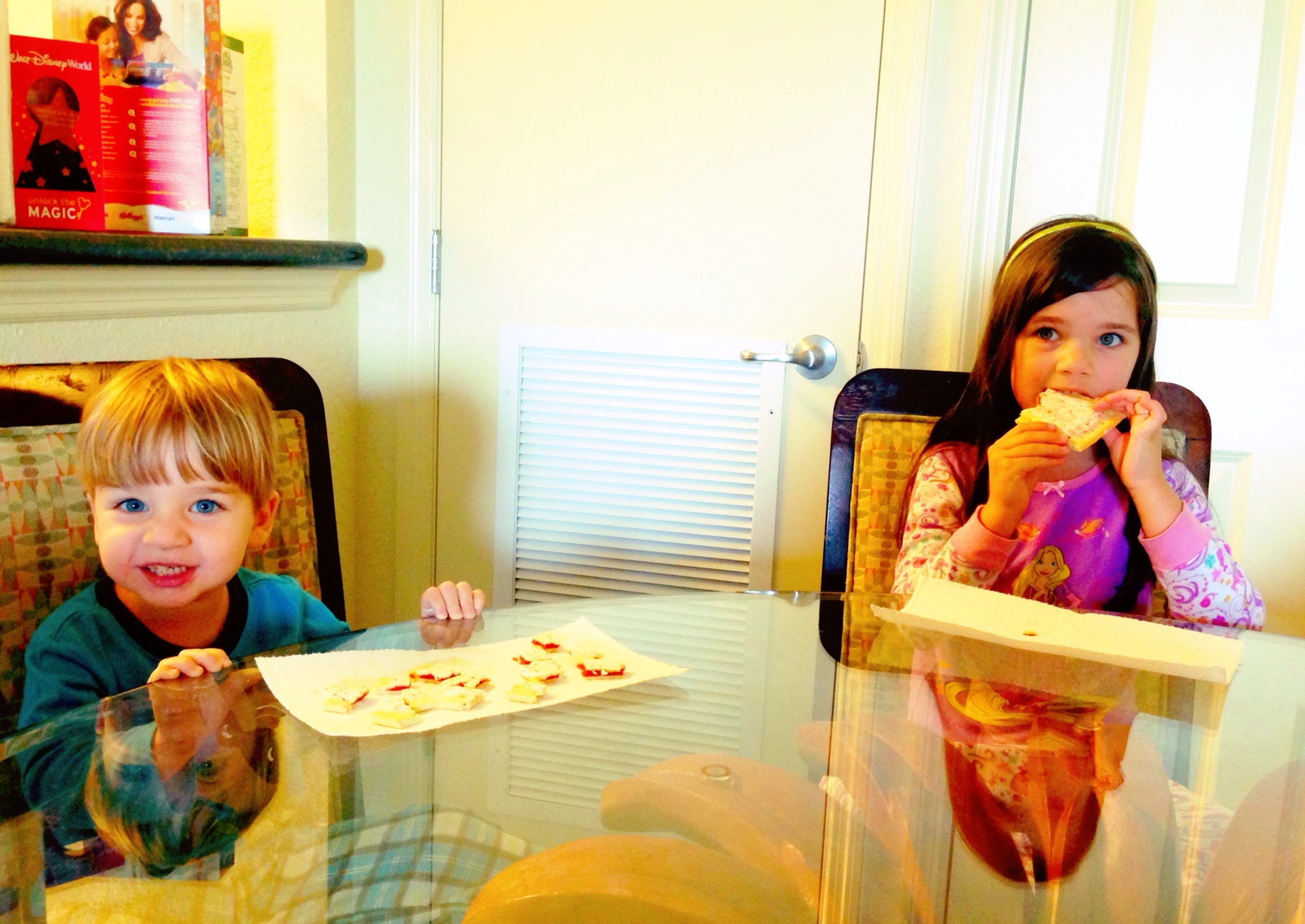 We had never told Ali we were even in the city that housed Disney World. She’s never been, she’s wanted to go, so we knew she’d be excited.

Even as we were driving, I wasn’t sure at what point to tell her. But as we approached the huge “Walt Disney World” arch, I knew it’d have to be then. After all, she can read.

So I did what all parents do and recorded the moment.

…Forgetting that she doesn’t like being made a spectacle of when she’s excited.

We arrived at the parking lot of the Magic Kingdom and exclaimed to each other how beautifully short the lines were. It was going to be a good day. 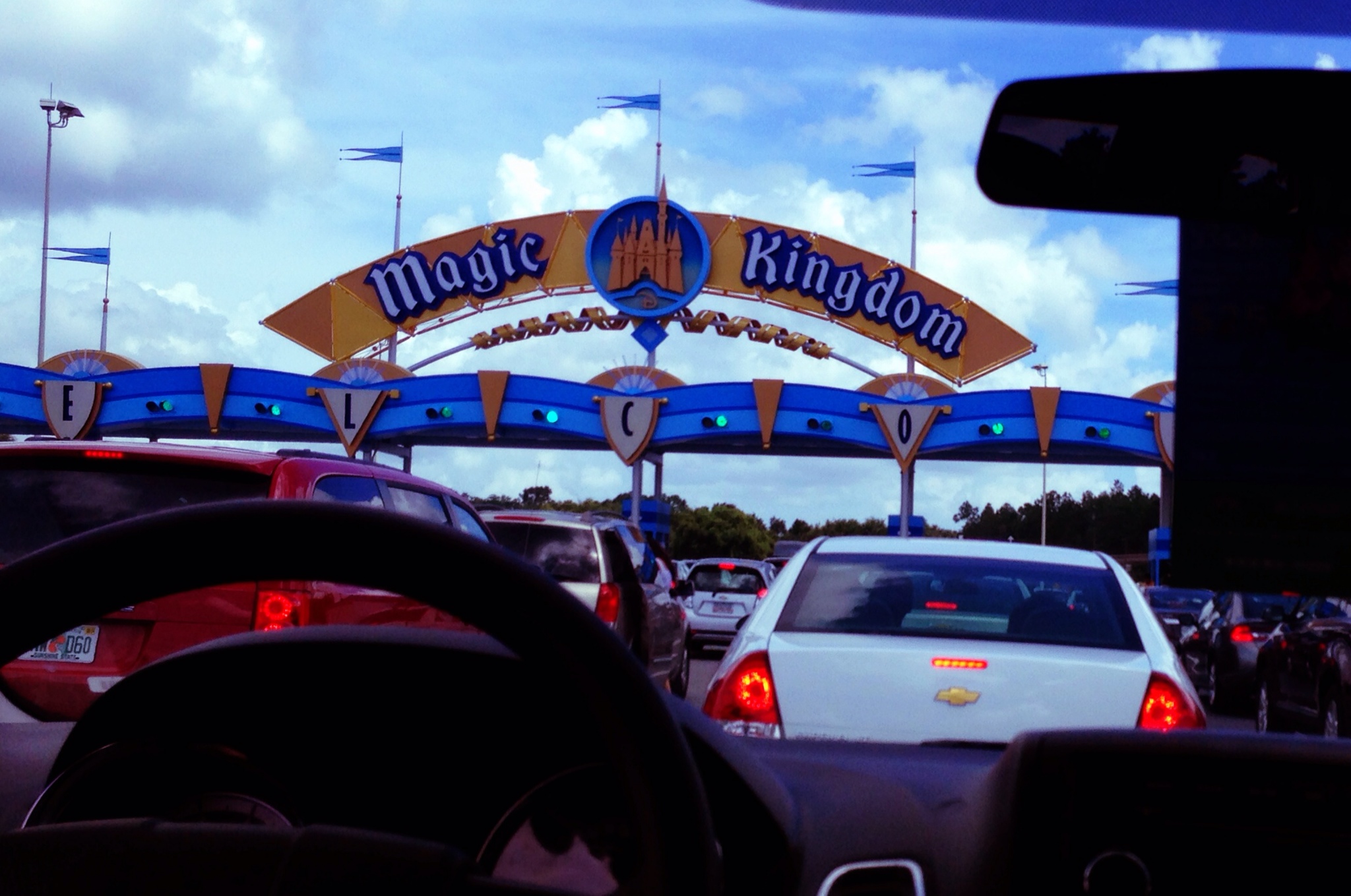 Until we pulled up to pay for parking and the lady told us the truth.

“The park is maxed out for the day. We’re sorry.”

And we were speechless, as BIG FAT FAILURE PARENT was stamped on our foreheads.

Yes, you all had told us to be there when the park opened. But midnight…and young children…and we thought we would be safe being 45 minutes late.

And so we had to explain to our daughter, one and a half minutes after telling her that we were going to Disney, that we weren’t, after all, allowed to go to the Happiest Place on Earth.

But never fear! We have a backup plan!

…after an hour of driving.

(Without recording it this time.) 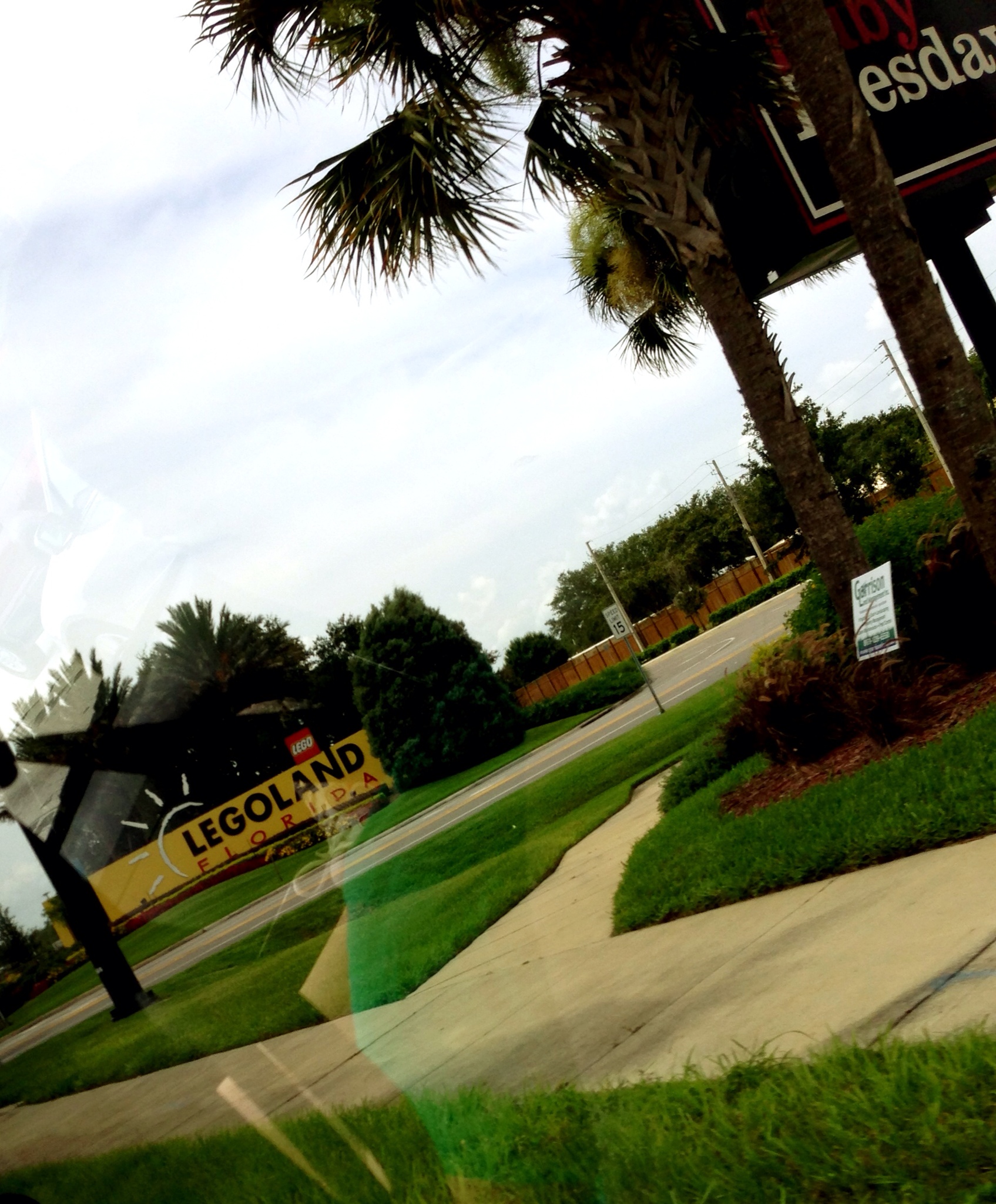 And so we spent the rest of the day at Legoland, about which I will write in another post.

This post is about Disney. So let me bypass that for a minute and continue.

According to all of the crowd calendars, it was only going to get severely worse as the weekend progressed. So that had been, as outside-the-compound tourists, our one decent shot at getting into the Magic Kingdom. But fortunately for us, Ali had no concept of what she was missing, so we decided to go to Downtown Disney and soak up some edge-of-the-park magic. 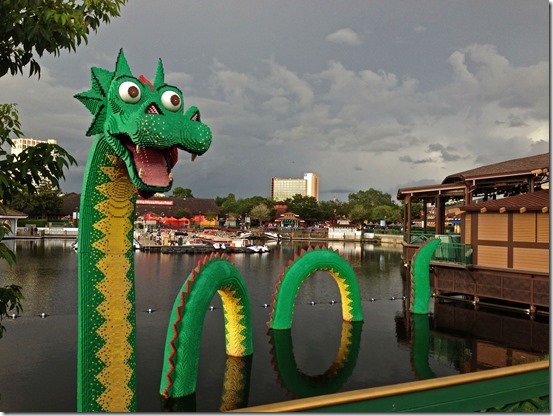 And we were right. We ate at Rainforest Café and visited the gift shops, buying out of our guilt. She loved it, she thanked us for not making her walk even more, and she declared it to be “THE BEST DAY EVER!!!”

But at Downtown Disney, they have a fantastic balloon ride. It’s a helium balloon that lifts 29 people, which tells me that the movie Up is not as improbable as we all thought. 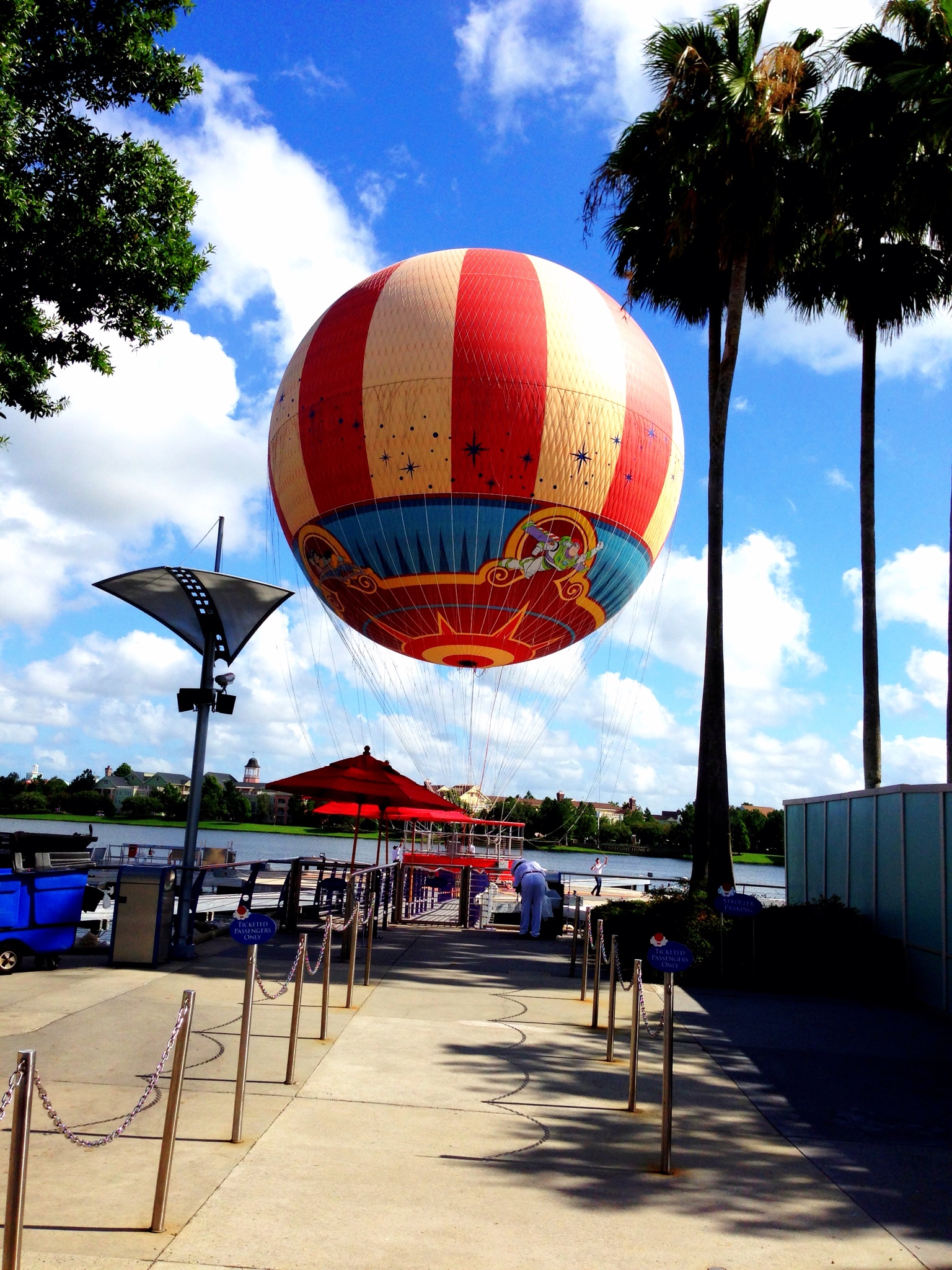 I so desperately wanted to ride it.

I love heights and I love good views.

So the next day, after giving Ali the option of attempting Disney again or going to the hotel pool, she very hurriedly chose the pool (where we realized that both we and our kids were much more relaxed and happier than walking around a theme park), then we planned our afternoon around going back to Downtown Disney and taking a balloon ride. There was no direct phone number on the website, but the balloon had been going up and down all day, so we assumed we could just show up and ride.

We arrived, found a parking place, got the whole family through the massive crush of people, only to read the sign.

“Temporarily closed due to thunderstorms in the area. Please try again later.”

I mourned my loss and we moved on, hopping onto the Monorail to give Noah the bliss of a train ride around the park that we couldn’t manage to gain entrance into. 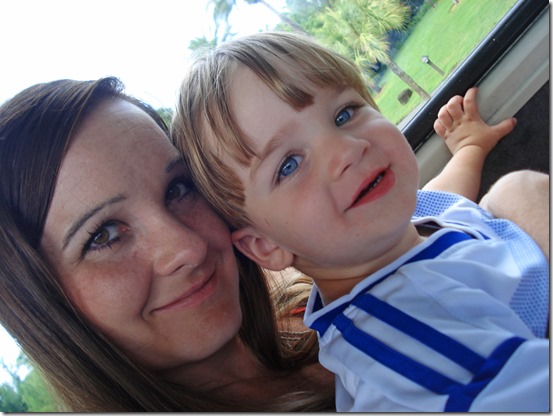 Both kids were thrilled to see Epcot, 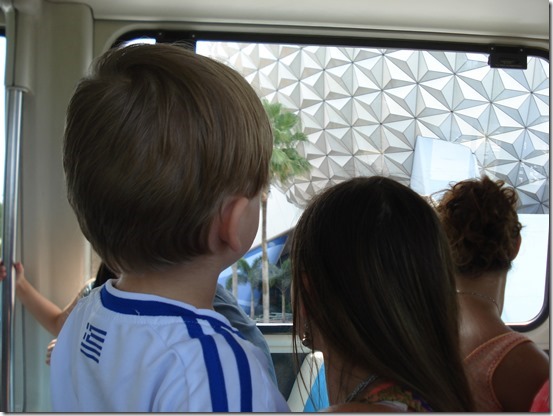 And to see Cinderella’s Castle from afar, in the air conditioning. With no walking or sweating required. 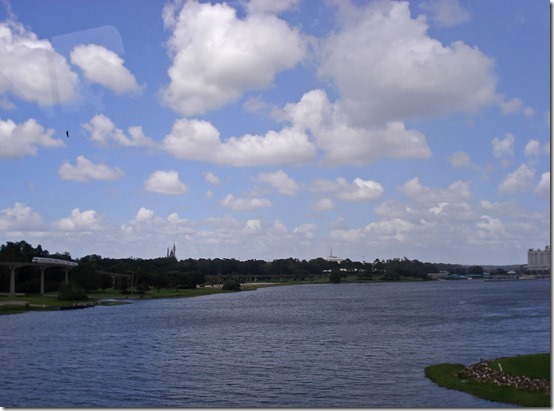 The next morning, as I let the kids play in the hotel, I watched the balloon go up, down, up, down, taking happy tourists in the air of Orlando. So once again, I drove to Downtown Disney, this time only with Noah and Amanda, as Ali had decided that she had no interest in flying.

As we pulled into the parking lot, the ride was coming down. It seemed hopeful – maybe we could get on the next ride up!

But it was also…very sideways.

We ran through D.D. once more, arriving as the balloon touched down Oz-Style. 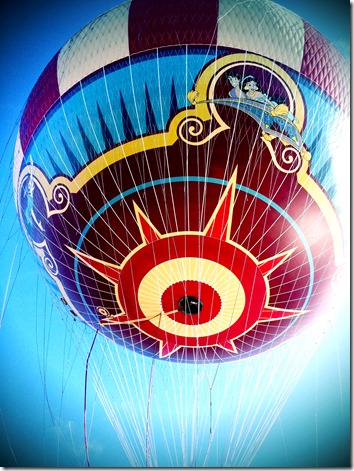 But then they started roping the Balloon down. And the screen scrolled a message.

“This ride is currently closed due to high winds. Check back again later.”

We had missed it by that much.

Left to acknowledge the fact that Disney is made for those who stay on-site, not for us steerage citizens, sinking on the Titanic of Theme Park Wannabes.

But my good husband was insistent – it had perhaps become a personal vendetta on my behalf. So the morning on which we were leaving, he encouraged me to rush to Downtown Disney.

And so Amanda, Noah and I headed off for one last attempt at Disney Glory.

We watched the balloon all the way over there. It was in the sky, seemingly happy. 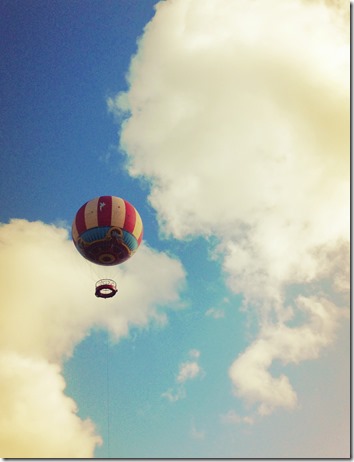 We parked, we ran, and we achieved payment. 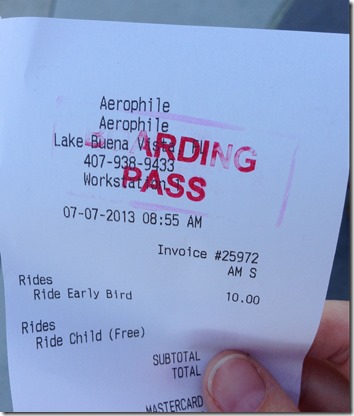 The balloon landed to allow us entrance. We didn’t waste any time. 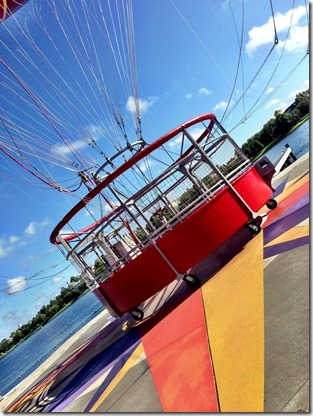 We hopped in and the ride took off, very wobbly and jerky. 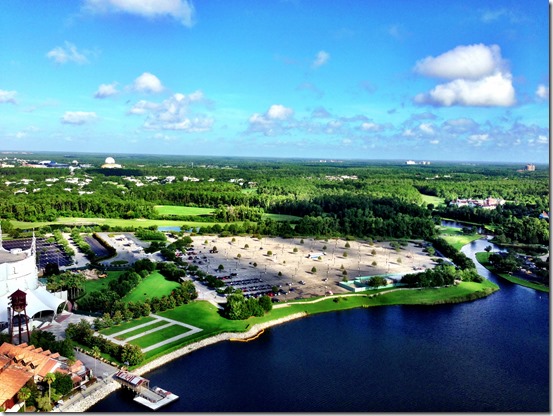 And it was beautiful. 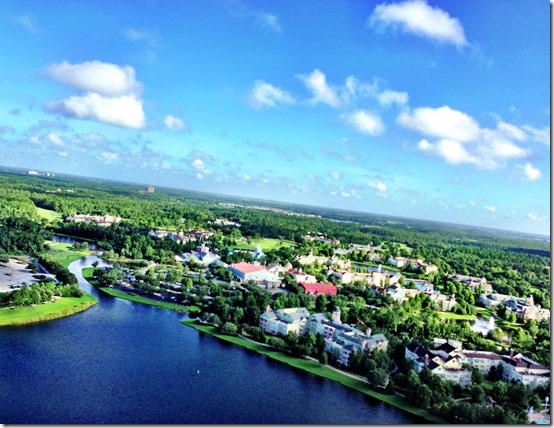 Noah waffled between asking to jump in the lake, asking to get back on the ground, and enjoying the view. 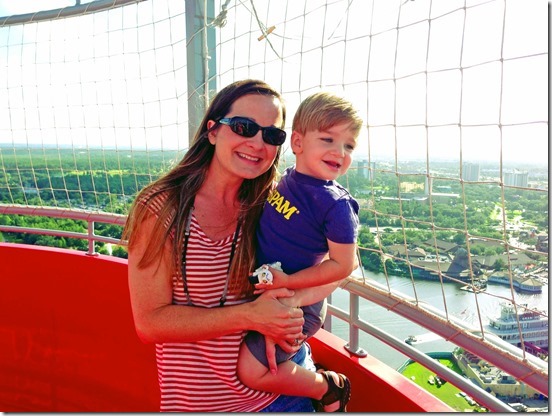 I fumbled to take pictures through the rope while holding a two-year-old and not dropping my phone. 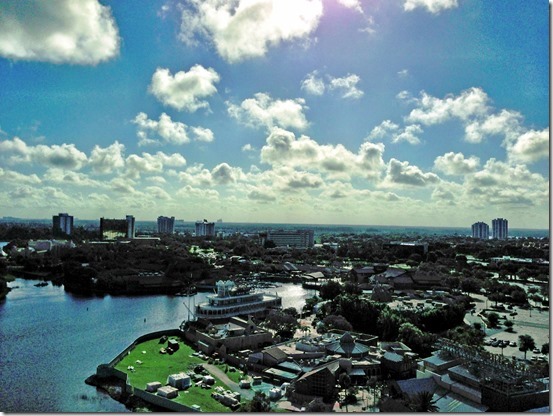 Chris texted me a picture of Ali watching safely from the hotel balcony. 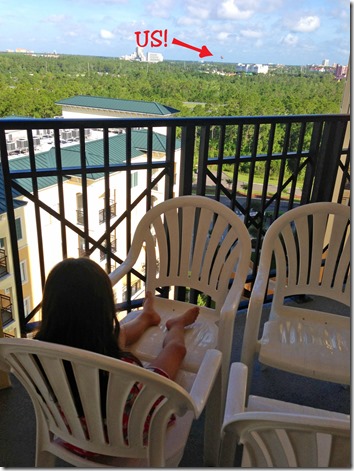 After about ten minutes in the air, we came back down, feeling exulted and victorious. 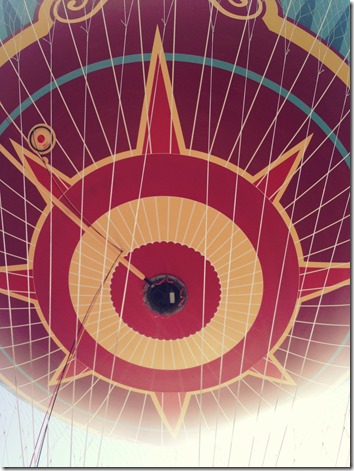 Disney had tried to deny us at every opportunity, but Disney had failed.

We ended our trip sticking it to the mouse.

39 thoughts on “In Which I was Rejected By Disney.”