Yesterday, I headed back downtown to get my heart monitor. I wasn’t remarkably excited about the errand, but I was distracted from that when I found everyone’s favorite word to hate, in graffiti form. 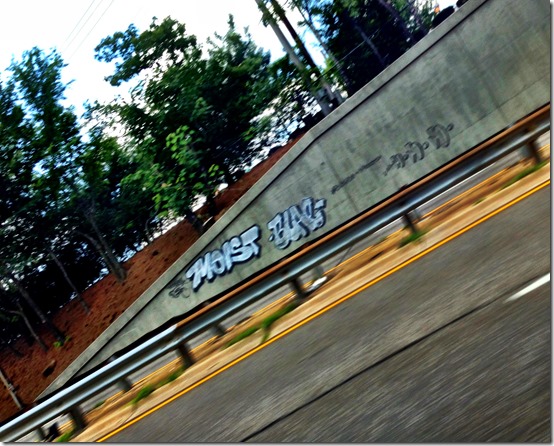 A few weeks ago, I had seen “Moist” on an interstate overpass, but I wasn’t quick enough to get a picture. As soon as I got the chance, I drove ten minutes out of my way just to get a picture of that original Moist – but to no avail.

The Department of Transportation, apparently, hates Moist as much as the typical American – they had painted over it.

So when I saw today’s Moistness, my heart jumped within me.

(Too bad I didn’t have my monitor yet.)

Then I had my appointment, where I had an awkward ten minutes with a younger-than-me unmarried male asking me to lift my shirt so that he could place five electrodes on my chest. 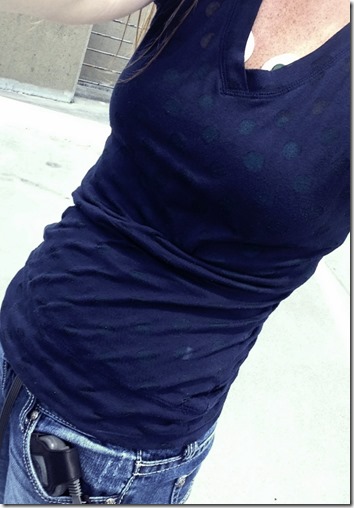 Then five more minutes re-placing them, because the machine was malfunctioning.

(Which was actually only the second most awkward situation I’ve had with a man this week, right behind last week’s doctor visit when the X-Ray tech, who looked like he would be much more comfortable in a pair of worn overalls and sitting on a tractor somewhere in the middle of a tobacco field, looked at me (still in my normal clothes) and said, “You’ve got to get out of that there braw before I can take this picture!”, then afterward, he motioned to my lonely bra on the table and said “I’ll go behind this here door so you can get that braw back on.”)

(I’ve got to find doctors with a higher ratio of female technicians.)

So after today’s episode of Fun With Men I Don’t Know, I walked out, trying to flush from my mind the humiliation. Which is when I saw this. 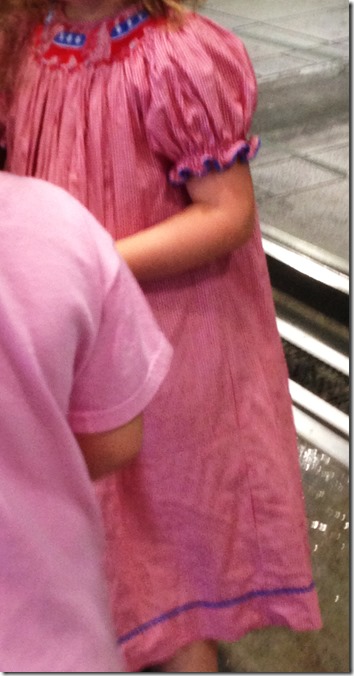 You might not be able to tell. It was hard to get a picture.

But THAT IS REPUBLICAN SMOCK. 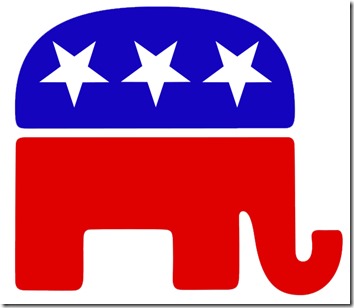 Guys. In all my days of smock questing, I will never ever be able to top that find.

(Unless I run across Democrat Smock. Because Donkeys on a Bishop Dress would be fairly fantastic.)

The thrill of Political Children’s Wear made me nearly forget about my awkward encounter and I began considering it to be a winning day of fantastic photos. And as I was endlessly winding down the parking deck, I noticed that the view wasn’t so bad, either. 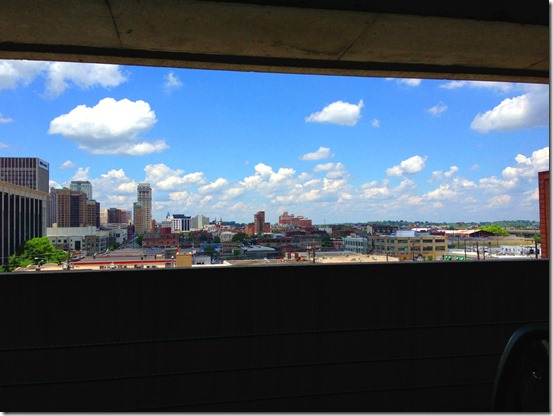 So I decided to wind the opposite direction and see what it was like on the top floor of the parking deck.

At first it looked closed – there seemed to be cones around, but I drove around them. And when I got past, I saw other cars, so I felt completely exonerated in my ignoring of conage.

And I was so glad I did.

Because the thing is, I usually peer at my city from the outside looking in, from atop the mountain overlooking the city.

But this was different.

This was something I’ve never experienced. I was in the middle of the city with a complete 360 degree view. 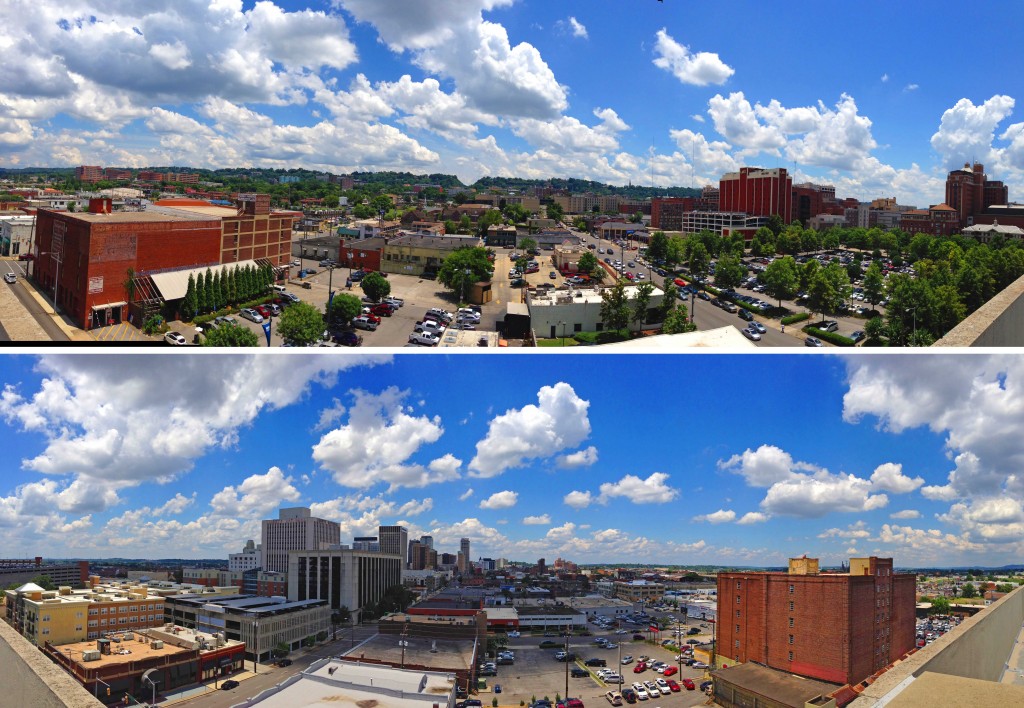 I parked and got out, heart monitor and all, and walked that parking deck, taking in every angle. The details were crisp, close, and intimate. 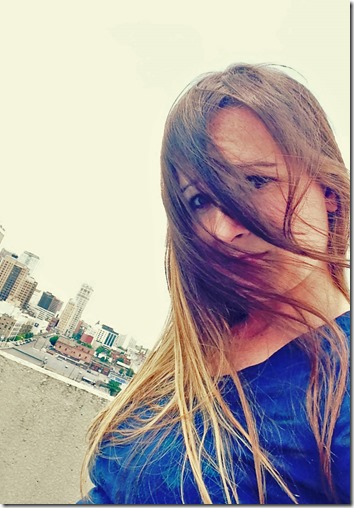 To the north was what we’ll call the Financial District, Birmingham’s tallest buildings built in an era when the banking industry had many headquarters here. We still have a few, but the ones that merged and moved away were nice enough to leave their buildings behind for a pretty skyline. 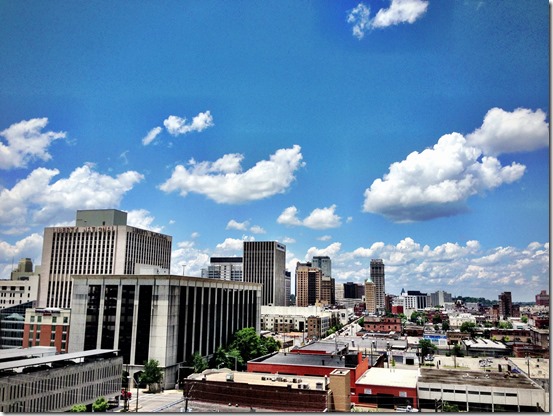 To the northwest was a mixture of Old and New Birmingham. Liberty National, an insurance company long housed in Birmingham, towering over new loft developments, bringing a much-needed revitalization and young life into our downtown. 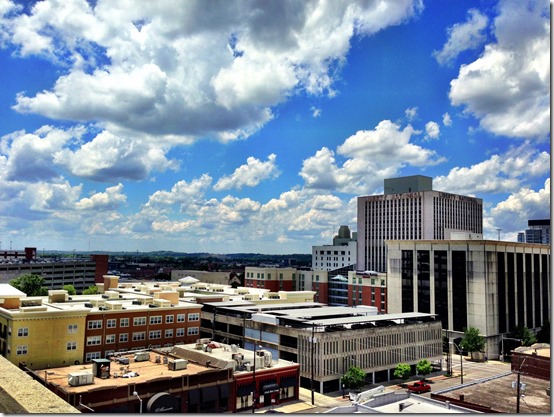 To the west was my Alma Mater, UAB, responsible for both my degree and my current medical care. Our city’s bare-butted mascot, Vulcan, can barely be seen to the left on the mountaintop. 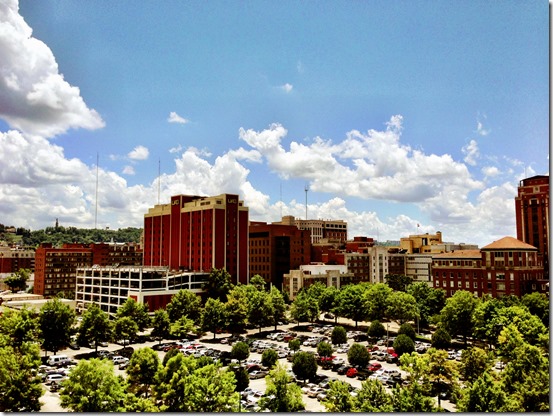 The south was my favorite view. Vulcan to the right, the dreamy but underutilized Quinlan Castle sharing the center of the picture with the Red Mountain Expressway cut-through (wouldn’t it have been exciting to see that mountain exploded?), and throughout the view was a good representation of how our downtown doesn’t sacrifice foliage for construction. 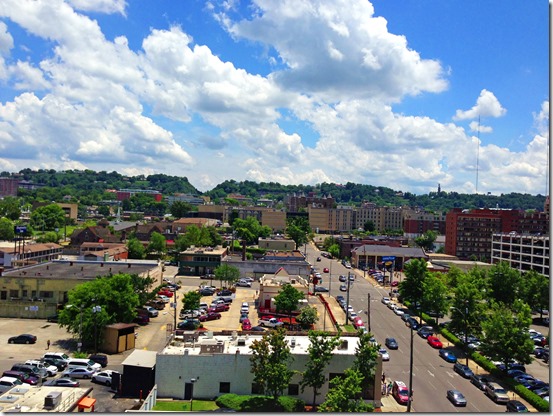 The southeast view had one of my favorite downtown restaurants, The Fish Market, in the forefront  and St. Vincent’s Hospital in the background. Along with some stunning skies. 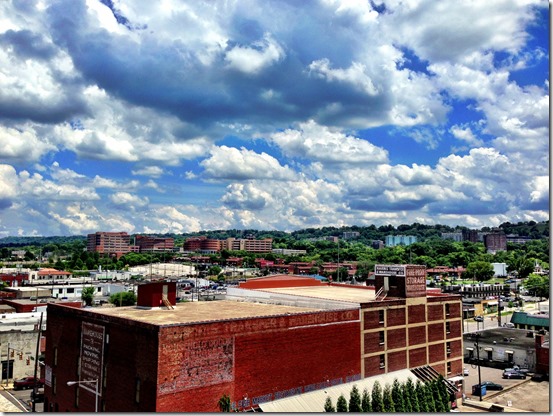 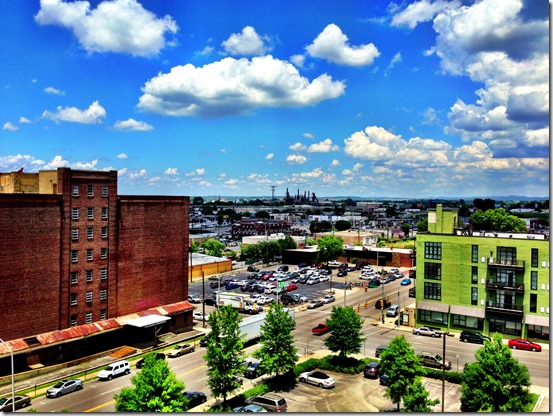 As I was looking east, I spotted some graffiti that caught my attention: 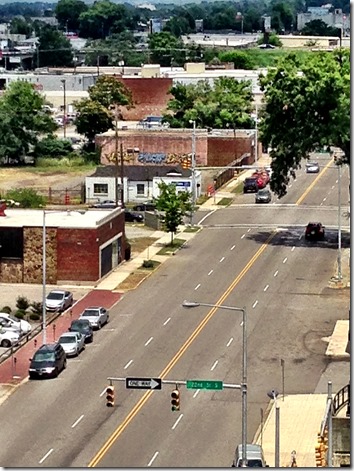 Upon further investigation, it was confirmed. Another Moist. 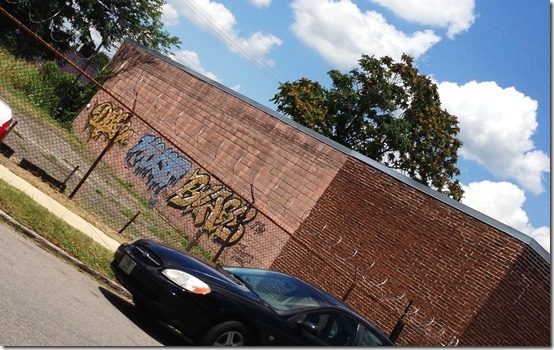 Some later-googling made me realize that I wasn’t the only one investigating this fantastic wording choice. 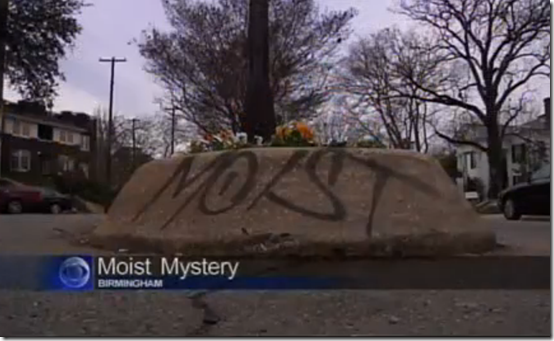 That’s right, people. Our city has a Moist Mystery. How about yours?

That evening after dinner, we took the kids back to one of our favorite spots overlooking the city. 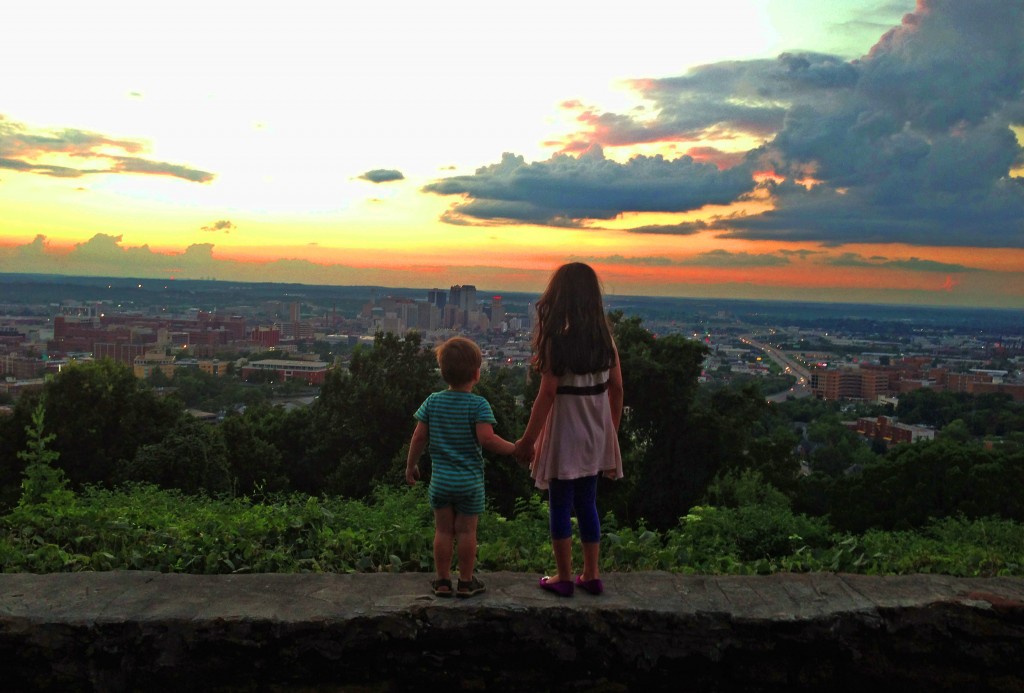 It was still as breathtaking as always, but more intimate than ever before. 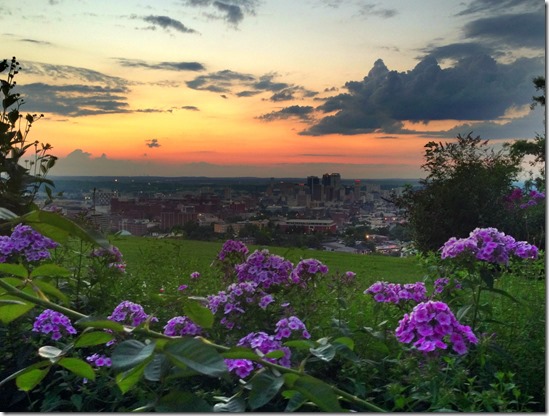 26 thoughts on “Birmingham from Within.”