I am not an Amazon hater. They bring me the things I need to my doorstep and keep me from having to haul two small children into the store.

I’m also not one to jump on the bandwagon of Facebook privacy complaints. Thanks to five years of blogging, I’ve long since come to terms with the lack of internet privacy, and have reconciled myself with The Core Internet Truth: Anything you post can and will be used against you. And it will NEVER EVER truly go away.

You put it on here, it’ll be seen. And you can’t control the who, what, when, where, and why.

With that being said, though, I’ve recently noticed an odd, relatively new behavior on Facebook.

You know all of those bizarre products on Amazon that have the humorous fake reviews? The Banana Slicer, the Women’s Pens, the Duplo TSA Security Checkpoint… 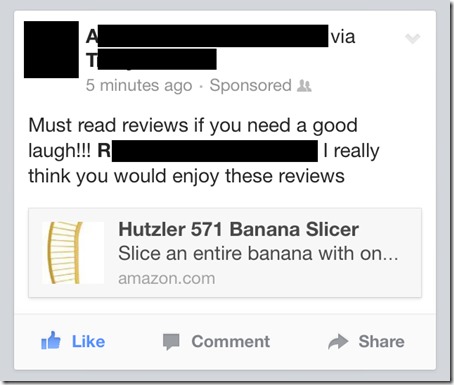 This wasn’t strange – at first I assumed that it was just the next trend of Facebook sharing. And at least they were more creative than the zagillion eCards that have been in my feed for the past few years, so I was cool with it.

But then I started to notice something. The very same status about a product would show up in my feed multiple times over multiple weeks, regardless of whether I was mentioned in the status. 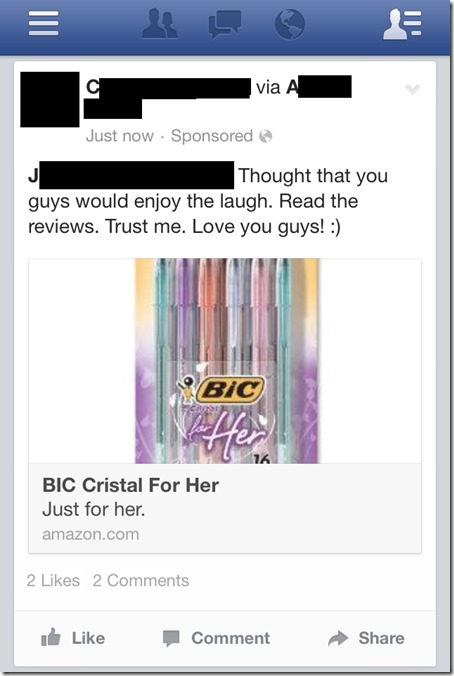 And even though it would be the fifth time I had seen a specific status, the time of posting was always “Just Now” or, in the case of the one below, “4 minutes ago.” 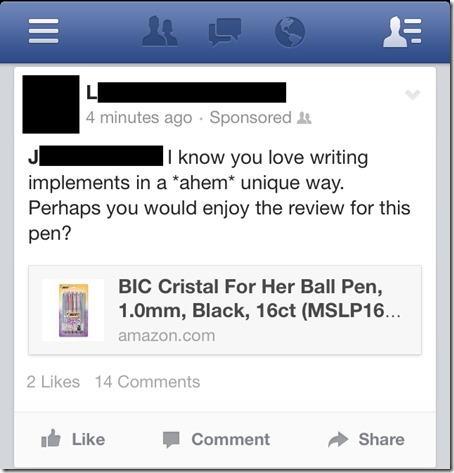 The likes and comments on this one give away the false timestamp: the possibility of something having 2 likes and 14 comments in four minutes is unlikely, especially since most people would first click through the link, read it, then come back and like or comment.

So I started looking more closely at these repeats in my timeline, and I realized that they all had something in common: 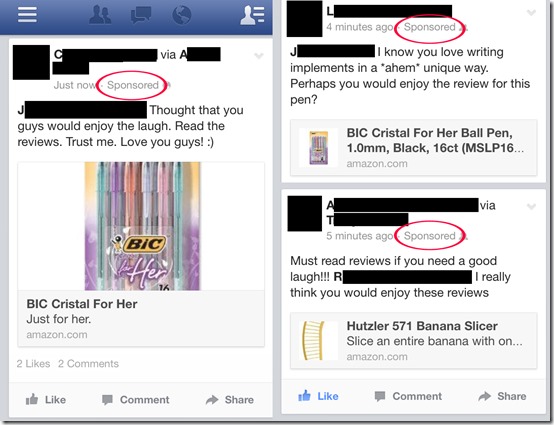 They were all sponsored, which means that someone paid to have these actual, genuine statuses by real people show up in more people’s feeds, as if they were advertisements.

But who sponsored them?

I assumed that the odds were low that three different friends paid real money to have these specific posts be seen by more people, so surely it was not them.

But who did it?

I did further experimentation to see what options and visibility that I, as a Fan Page, have. I cannot see the walls of people who “like” my page, nor can I see their posts mentioning my page or sharing my links, and I certainly can’t sponsor their statuses.

So although this isn’t a publically available option, the only logical conclusion is that the secret sponsor is Amazon (a fact which David Griner at AdFreak confirmed a few months ago.)

And since they can’t do it from Facebook proper, clearly Amazon has made a behind the scenes special deal with Facebook that goes something like this…

You have access to, like, EVERYONE. And you know what everyone is talking about, regardless of their privacy settings. So do you think you could, like, hook me up, and anytime someone links to me, go ahead and sponsor that post? I promise – I’m good for the money.

Although Facebook has been doing shady advertising techniques for years (such as Sponsored Ads when you try to search for your long-lost 2nd grade best friend, your page likes becoming ads to try and entice your friends to like the same things (“Well gosh darn it, if Cindy Lou likes Wal-Mart, I guess I should, too!”), and discovering that you involuntarily liked a corporate page, perhaps even after your death), I haven’t really gotten on the bandwagon of hating on them for doing it.

Because after all, Facebook is providing us all the invaluable service of making it easy for us to become victims of our distant friend’s daily political rants, see more cat memes than the total population of cats in the United States, and live in a pool of everyone’s vague angst.

They deserve to make money for high quality internet such as that.

But this new option brings up some important questions that I think are worth discussing.

~ If corporations can pay Facebook to sponsor our personal statuses and shares, what are the potential awkward situations that this could cause?

For instance, if they could sponsor key words in addition to links, and I happen to have an Aunt named Jemima who dies, would I all of a sudden find my status about my Aunt Jemima’s funeral arrangements sponsored for weeks after she was in the ground?

~ Are corporations getting to pick and choose which links they sponsor, or are they also inadvertently sponsoring negative rants about their products? This, at least, could be fun.

~ How do we as consumers feel about a corporation using our personal statuses to promote themselves to all of our friends and friends of friends without our permission or knowledge?

~ Speaking of which, are our privacy settings considered in this action? If we don’t want our posts available to friends of friends, can Amazon come in and sponsor our post to be seen by friends of friends anyway?

~ And since individuals can now sponsor their own personal posts (I suppose if you’re REALLY desperate for someone to see your vague angst multiple times over multiple weeks,) do our friends assume that it was actually we ourselves that sponsored these Secretly-Corporately-Sponsored posts?

~ If multiple parties can sponsor an individual’s post, shouldn’t Facebook add more specific information, such as “Sponsored by Amazon” or “Sponsored by Rachel”?

~ Should Facebook notify us that some third party paid them to have our status sponsored, and also give us the right to opt-out?

~ And, perhaps less importantly, are all of those amusing product reviews actually just a creative PR stunt by Amazon to get people onto their site? Probably not, but one must wonder…

So many questions, so few living, breathing, reachable people at Facebook or Amazon that could or would answer them.

What do you think?

12 thoughts on “How Amazon Turned You into Their Sales Force.”