Ali has an iPad Atlas that is quite fabulous. She regularly turns the globe, scours the world and learns all sorts of cultural nuances.

And to make it all the more fabulous, it speaks in a British Accent.

Which is great and well and just peachy – except in the case of words that Ali has only ever heard on her atlas. And there’s no fixing what’s done – she learned the word that way and her Atlas says it’s correct and there’s no way that she’s going to believe me that it should be pronounced otherwise.

We’re in Alabama. Talk of geysers doesn’t come up much. Therefore, Ali pronounces “geyser” the way the voice on her iPad taught her.

“Hey mom – can we go out west and see a geezer sometime? That would be really fun. I’ve always wanted to see a real live geezer!”

But geezers are nothing compared to a certain night sky phenomenon that the Atlas taught her about.

So, I can be driving down the road, thinking about mundane happenings and tasks to be done, when Ali will interrupt to ask,

And all I can think about are huge, colorful swaths of hemorrhoids.

I asked Chris to set my alarm for seven-thirty,
But I awoke at eight-thirty.
I swore he didn’t, he swore he did.
The blame was at a standstill,
Until my alarm went off at seven-thirty…
That evening.

I Don’t Think That Word Means What you Think it Means.

People Magazine is gearing up for their annual extravaganza of proclaiming the identity of the World’s Most Beautiful People. They have a “Special Double Issue” just to lead up to the actual complete listing. 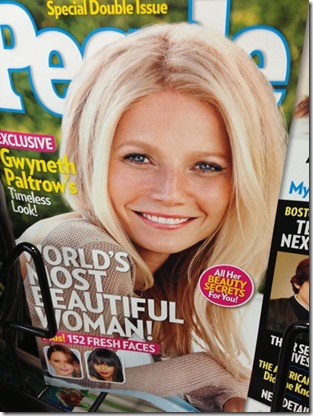 And this is an award that irks my number-crunching brain oh-so-greatly every single year.

Because without fail, there is a severe case of unfair representation in those whom People Magazine deems as the most beautiful people in the world.

Let’s do the math. And just for a moment, so our numbers aren’t astronomically small, let’s assume that People is exaggerating it’s use of “World” like baseball does in “World Series” and let’s just talk about the United States.

.0526% of the population are actors and actresses, yet People’s list is made up almost exclusively from this category. Every year.

Sure, there will be a singer thrown in here, an Oprah thrown in there, but by and large, well – see for yourself.  Here is the list of the #1 Most Beautiful Person each year since they started keeping track: 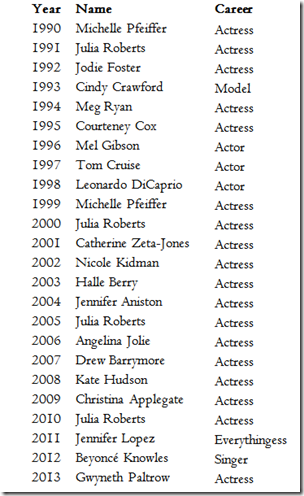 And, because I just know you’re waiting for one of my pie charts… 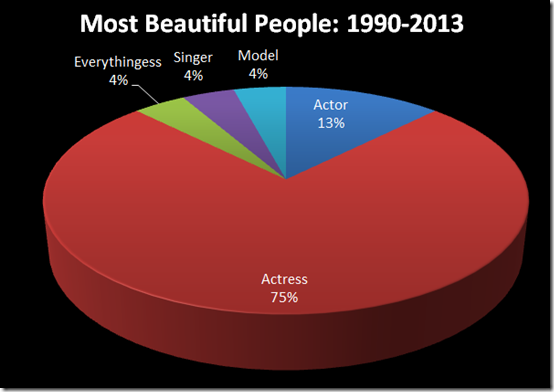 What about the random girl in Bug Tussle Oklahoma who happens to be more beautiful than Meg Ryan? Or the ravishing lady in Thief River Falls Minnesota that is way prettier than Michelle Pfeiffer who won TWICE, if you didn’t notice?

And then if we take the Magazine’s use of “World” literally, then their double-triple-ten-thousand-page special edition really is just a large pile of donkey dung.

Contrary to People Magazine’s assumptions, not all of the prettiest people chose to make a trek to Hollywood. So either call it “Most Beautiful Celebrities” or turn it into an American-Idolesque Reality Show. But let’s not lie about it anymore, mmmkay, People Magazine?

(But if you do turn it into a reality show, please don’t film the shocked and horrified ugly people that got turned down at the auditions. Crying, cussing, and shooting birds at the camera makes one ugly enough when one is pretty – no need to pile on.)

The timing of puberty in trains puzzles me.

Thomas, despite his designation as the number one train, has clearly not hit it yet. His high-pitched annoying squeak of a voice could be carbon-dated to no older than 10.35 years old.

His friend Percy is even further from it, sounding like a six year old boy that weighs less than forty pounds.

Yet James, the immature and vain train, has definitely hit adolescence and received his proud, deep voice.

Gordon, rightfully so, is also post-pubescent. After all, he’s a grouch.

Then you have Toby, one of the oldest and most antiquated trains on the Island of Sodor, but yet he still has the voice of a village lad.

We need an episode to explain this.

Something like, “Thomas the Train asks, What is Happening to my Body?”

And since Thomas and Friends was created in the same country as the good people that brought my family the Aurora Boreanus, it’s sure to be a hit.