Our trip to New York last week was was Chris’ first visit, so he got to experience the full unexplainable magic of the city, and he also had a few adventures along the way.  This post is one of his fabulous guest posts (written the night before we left), so be sure to give him props, as he is my official Contributing Editor, Rump Photographer, and Man On The Street.

It is a popular Mediterranean cuisine in New York City, found everywhere on street carts.  According to Wikipedia, Halal is defined as “foods that are allowed under Islamic dietary guidelines.”

As it happens, the most popular food cart in Manhattan, a halal one, was right outside of our hotel, at 53rd St and 6th Ave.

Rachel told me about this particular food truck a couple of years ago, when she was attending BlogHer at the same hotel.  She hadn’t partaken from it, but she’d witnessed the phenomenally ridiculous lines. 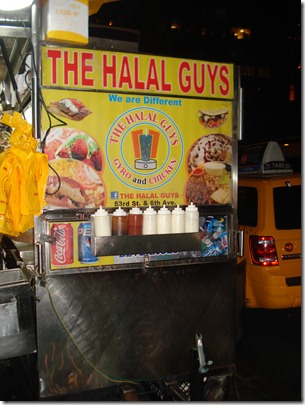 The Halal Guys.  Gyro & Chicken. Yes, We Are Different.

This food cart has a line every night. A long line. Every night. 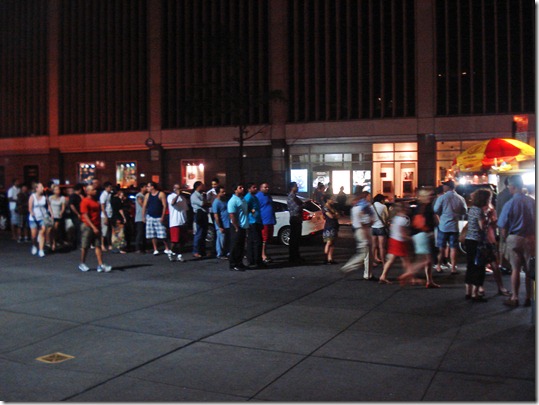 Therefore, since we were staying right across the street, it must be tasted.

There was one small problem, but I’ll come back to that.

I came running by this cart about 5pm. There were about 15 people in line, and it smelled fantastic. 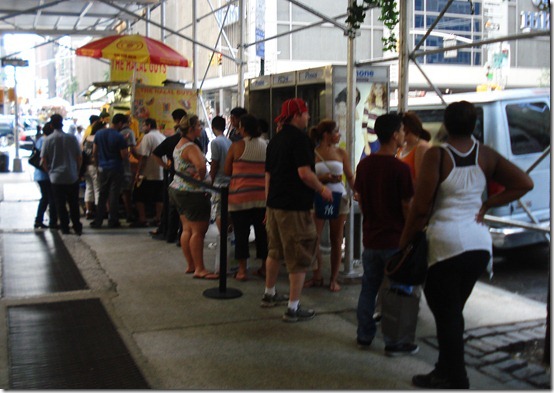 I made a mental note: come back and try the Halal late tonight when the post run munchies come around, because that’s what parents do when kids are elsewhere: go out after 7pm.

So at 10pm, we checked out the Halal situation. By this time it was the Twilight Zone.

There was no longer one Halal Guys cart at 53rd and 6th – there were now three. All Yellow.  Same logos.  Same T-shirts.  Same smell.

Halal Guys cart #2 (that was a new arrival since 5pm) had about 60 people in line.

There must be some mistake.

We analyzed this situation, then headed upstairs. Not long after, I proceeded, Man on the Street style, to figure out what was going on.

I presented my question to several people huddled around their sacred foil pans filled with Halal goodness at super-line Cart # 2. 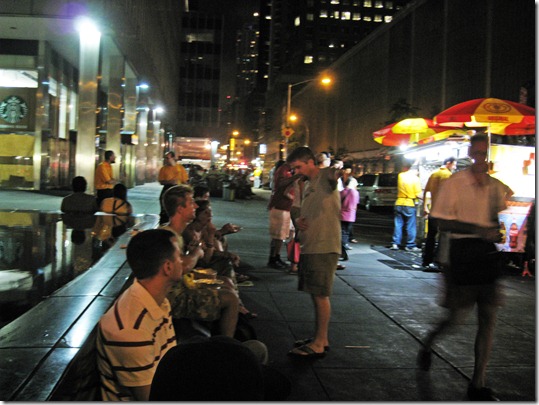 “That cart had a line at 5pm. Now they have nobody. This cart has a huge line. They weren’t even here at 5pm. What is the difference?”

“Because people are sheep.”

“There is no difference. Same guys. Same everything.”

“I don’t know. We just heard this was good.”

Could this really be possible? That native New Yorkers and tourists alike just assume that a longer line means its better?

I continued my interviews at ex-popular Cart #1. I was taking pictures when three girls walked up. In response to my question:

“We’ve never been here before, We heard this was good. Its the same thing, right?”

I proceeded to always-a-bridesmaid Cart #3. This time I was going to solve this. These guys had nobody in line. 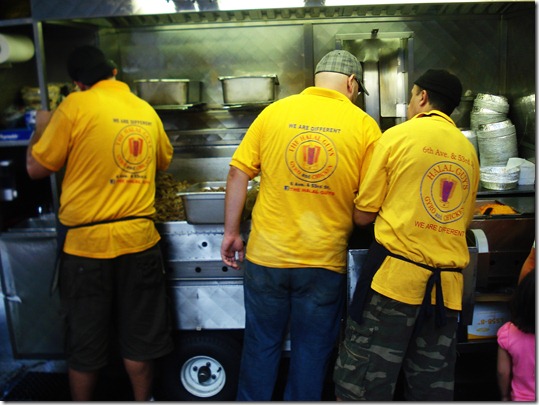 So I asked the yellow shirted Halal guy who tried to help me. His heavily accented response, gesturing with annoyance at Prom Queen Cart #2:

“They are only open at night.”

“Yes, but WHY are more people there?”

He shrugged his shoulders.  “They have been there for 25 years.”

THERE IT WAS.  THE TRUTH.  THERE IS NO DIFFERENCE.

If these guys were not the same company, surely in this city of 139 hour workweeks for freshman lawyers there would have been a trademark infringement settled long ago.

There are three identical Halal Guys carts at 53rd and 6th, and depending on what time of day you go, you think you are getting the “good one” based on the line length.

I bought a plate from the Unlucky Cart #3. Gyro over rice. Rice, gyro (lamb) meat, lettuce, pita bread, and sauce. Two sauces actually. White sauce, which appeared to be the common sauce, and red sauce, which was duly noted as very spicy.

I asked my Halal Guy, “What are the sauces?”

So turning the corner,  there was another Guy refilling the extra sauce bottles to be used at one’s leisure.

I asked new Halal Guy, “What are the sauces?”

“The white sauce and the red sauce.”

“The white sauce and the red sauce!”

I took the hot foil platter upstairs to share with Rachel, and we began to investigate. It was yummy. Really yummy. She wasn’t terribly impressed, but she never is with street/fair food. 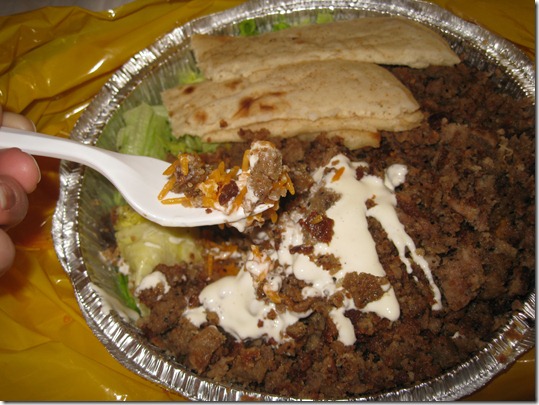 So the sauces. The white sauce tasted like ranch dressing made with yogurt instead of mayo. It was good stuff. 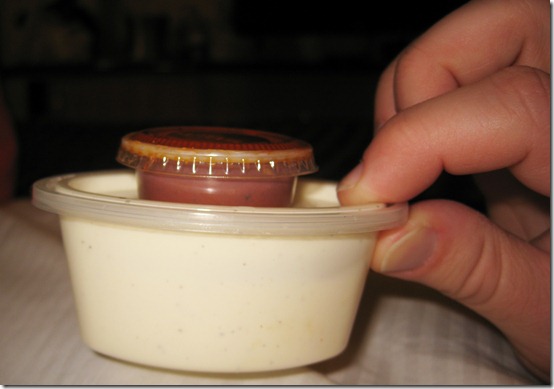 Then I tried the red. It was a tiny container. Too tiny.

But I tried it anyway.

Despite my heavy Hot Wing habit back home, this was quite possibly the hottest thing I had ever eaten. Within a minute, my nose was running, my eyes were watering, and I was duly impressed.

I’ve been nibbling far too much on this Halal as I have written this post tonight on our last night in New York.

And I am going to regret this at LaGuardia tomorrow.

But tonight, we are young. And the Halal Guys are making BANK outside. 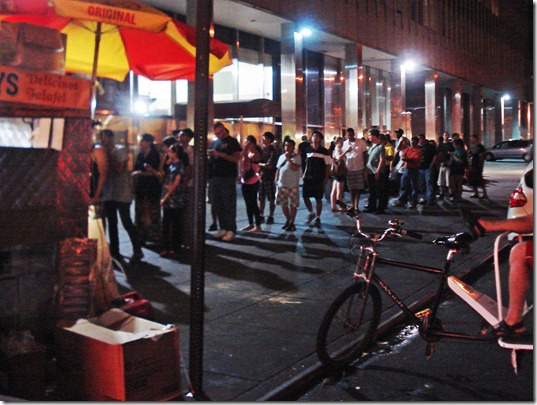 21 thoughts on “The Secret of Halal”