Chris has never been one to shy away from the concept of using birthday credit.

(Nor have I, as I prefer to have a birthday month.)

Usually, about three months before his birthday, he starts throwing things out there that he’d like to have, do, or eat on his birthday.

This year, however, was surprising.  There had been little mention of his birthday and the grand dreams surrounding it.

He pondered his options.

He threw a few ideas out there.

We discussed them and I, in typical generous birthday fashion, told him that we could do whatever he wanted.

Somehow that triggered a process in his internal RAM.

“I want to go to that new Chinese Buffet in Hoover.  I do like a good Chinese* Buffet**, and it’s something that I would never make you do if it weren’t my birthday.  So it’s the best use of my Birthday Credit.  Plus, Katherine*** says it’s good.”

* I hate Chinese Food.  I blame this on my parents – they didn’t like it when we were growing up, so our Chinese Taste Buds were never properly developed.

(As an aside, they have since decided that they like it and occasionally invite me to join them at a Chinese restaurant.  I remind them of what they did to me and tersely decline.)

** I also hate buffets.  I blame this on becoming a bit of a foodie over the past several years.  And on calorie counting.

So the day arrived.

After much at-home celebration, we set off for dinner.  Chris asked if I wanted to take some ham-in-a-bag to sneak in and eat at the restaurant.

Or if I wanted stop at the doc-in-a-box and get an antibiotic shot.

But I was determined to have a good attitude and not ruin my husband’s birthday meal.  I would grin and bear it.

We arrived in the parking lot.

And there he was, looming before me like a Chinese Jabba The Hut, waiting to engulf me into his slimy folds of flab. 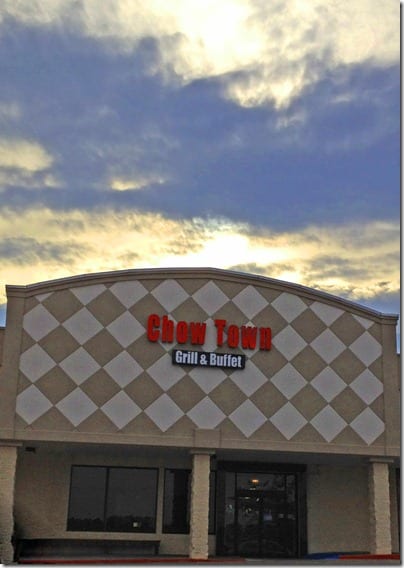 The name alone made me convulse.

I looked down at the pavement, hoping to discover the courage within.  Instead, I just saw this: 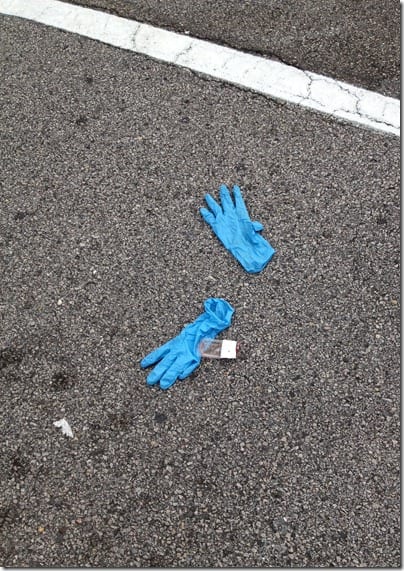 Rubber Gloves.  The Must-Have accessory for any buffet.  And I hadn’t brought any.

We walked into the eerie restaurant via it’s oddly corporate entryway. 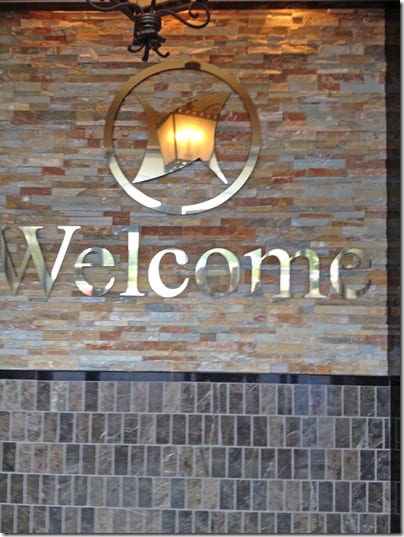 When we went through the second set of doors, the smell assaulted me, infiltrating my every pore with nausea and deflating any sense of appetite that had formerly been residing in my body.

Chris, on the other hand, was a happy man.

They led us through rows and rows of aisles and aisles of rooms and rooms of pristine, empty booths.  As if they had never been sat in.  As if everyone knew better.  But us.

Noah, like myself, was uncertain of this vast, echoing, empty establishment.  Was that mysterious room in the middle of the restaurant where they harvested the humans that walked through their doors?  Would Kung Pao Noah be on the buffet tomorrow?? 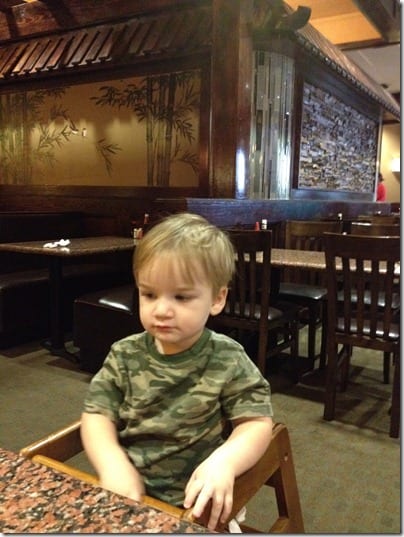 Chris went first and got the kids some food.  Ali was oblivious to mine and Noah’s misgivings. 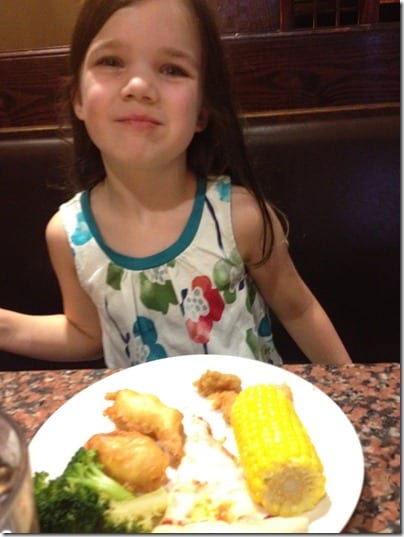 Mental Note: don’t let her out of my sight. The unsuspecting ones are always the first to go.  And she would not make a good eggroll filling.

Next, Chris went to get his own plate. 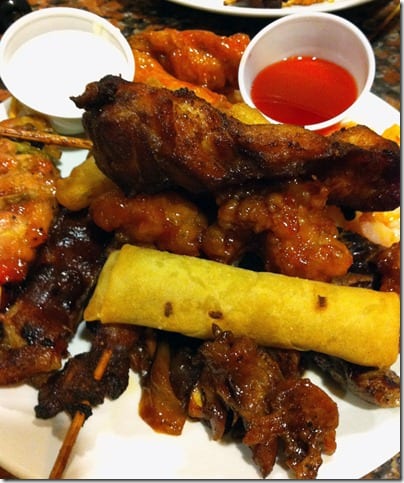 When he got back and began to chow down on his protein overdose, I began my own plod to the chopping block.

I walked through more empty dining rooms to get to “The Food Room”.  The smell overwhelmed me so that I could barely see.  When I regained my wits, I looked around.  It contained innumerable buffet tables, mostly full of depressed-looking dead animals.

The shrimp cocktail drooped their sad tails in my general direction.

The…(was that chicken?) looked like someone killed its best friend (they probably did).

The giant fish filet was floating in a lake of murk, exactly as I imagined the Horcrux Cave Lake would look.  I stared for a moment, then was relieved that no Inferi reached out their hands to grab me and pull me under the slimy surface.  Because there was no Harry Potter anywhere nearby to save me.

I circled the room a couple of times, looking for anything edible.

It was difficult, but I finally decided on a salad. 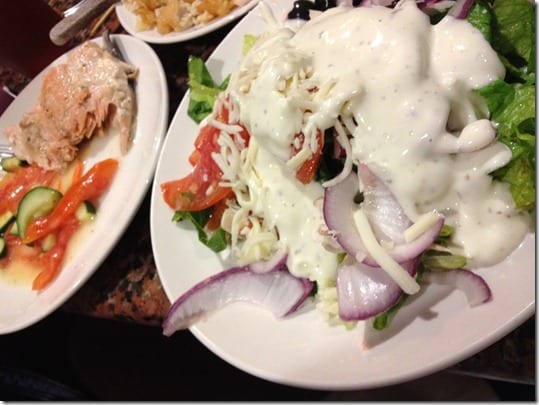 And, to venture a little further into this culinary experience,  I also risked it all and got the tomato and cucumber salad, and a piece of the InferiFish. 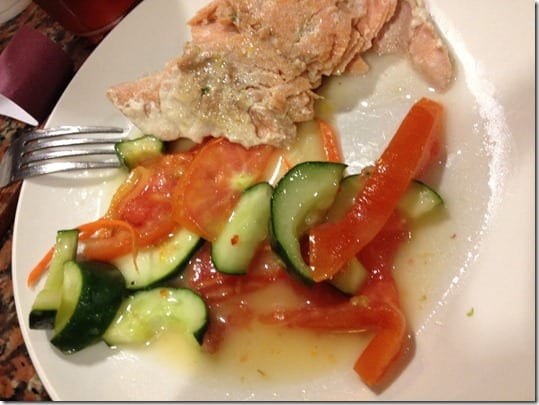 When I arrived back at our table, Chris looked at my plates.

I started with the tomato and cucumbers.  They were edible, albeit nothing I would ever choose to heap onto my plate normally.

I ate a bite of the InferiFish.

I covered it in salt and tried again.

No, this fish wouldn’t be happening.

I moved on to the salad.  The ranch actually tasted rotten.

What is wrong with me?? I am NOT this much of a food snob.

I began to focus my energy on helping Noah eat his dinner, hoping that Chris didn’t notice my own lack of culinary delight.

“What’s wrong with your salad?”

“The Ranch tastes funny.  Like it’s gone bad or something.”

“You mean the same Ranch that Ali and I are dipping our chicken in?  It’s fine.”

I tried it again – it clearly tasted like rot.

I pondered my situation.  I really thought I would do better than this – I am not this high maintenance!

Then I realized – it must be the smell.  I cannot abide the smell of Chinese food – it creates an uncontrollable nausea in the pit of my stomach.  That was what was making everything taste awful.

For the next 15 minutes, I pushed the food around my plate, trying to look convincing.

The waitress came by.

“Any plates are finish?”

She looked at the plates, offended by my lack of indulgence.

“You want me to take these two plate?!”

She picked up my plates and walked off with a considerable amount of offense in her stride.

Relieved to finally find something I knew I could eat, I ripped into my package and tugged out my fortune. 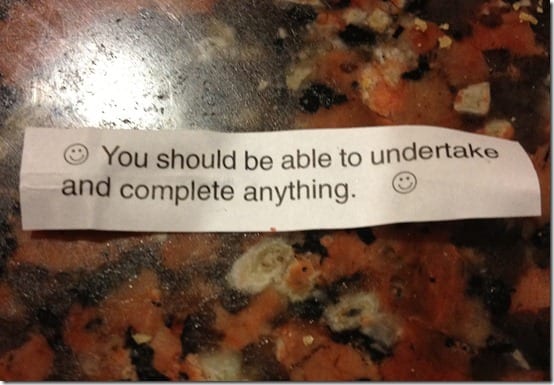 …”SHOULD” being the key word there.

We paid and walked out, and I let out a giant sigh in relief as the quirky motorized mother cat waved goodbye. 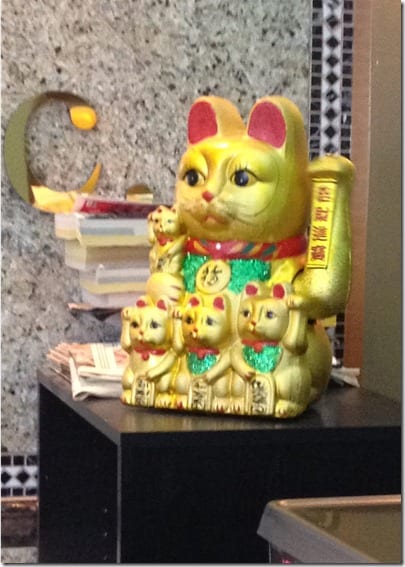 Because really, she made everything so much less creepy.

Chris was a happy man. Not that he got the best meal he could have chosen, but that he maximized the usage of Birthday Credit.  I was sure to bring him to the understanding that he had used his next ten Birthday Credits as well.

I literally did come down with a spontaneous cold…or allergic reaction…or something immediately after we left the restaurant.  It haunted me for days, taunting me about those few bites of InferiFish still swimming around in my gut.

We left with both children in tact.  I’m still not sure what that mysterious inner room was for.  I hope I never find out.