Chris and The Sister Wife (also known as his new car) have complicated our week rather significantly with quite a bit of confusion and delay.  The full story will be forthcoming..as soon as it reaches some sort of closure.  In the meantime, as penance, I have made Chris guest post for me about an exploit that he embarked upon a few weeks ago.

Last year I brought you my running tour of San Diego, and told you that my favorite ‘me’ thing to do on vacation is to explore in running shoes.

When we took our family vacation last month to Saluda, NC, I planned out a running route around Lake Summit. This is a true mountain lake. The dominant smell around this lake is evergreen. I have never smelled this woodsy spicy goodness in the wild, only the Christmas spray can variety. 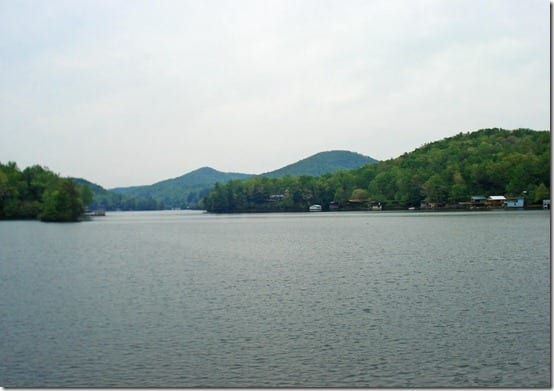 It is standard lake picturesque. 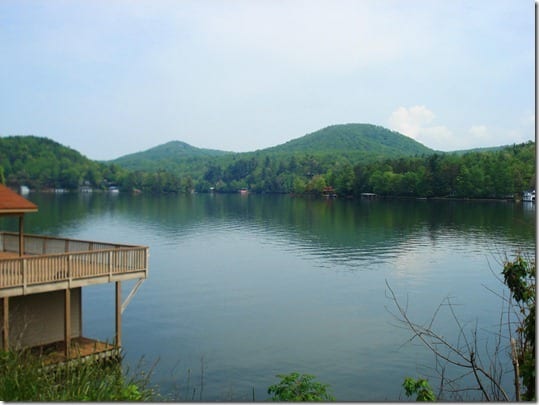 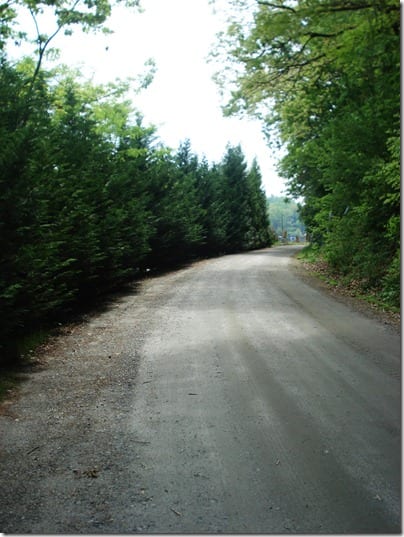 Lake Summit is full of character and charm, like horses who can’t be trusted with vision, 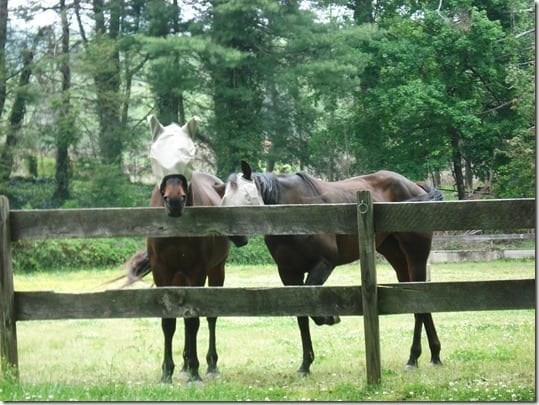 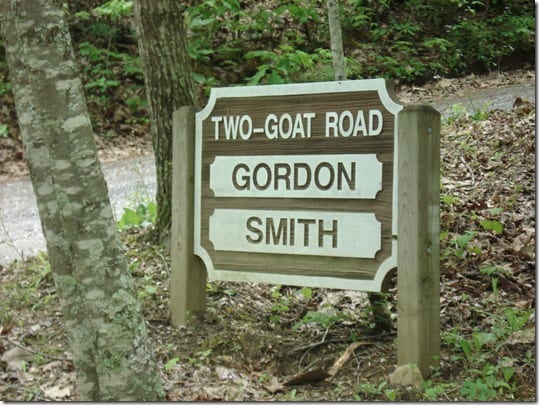 and a private field for an emergency #1 complete with scary shack. 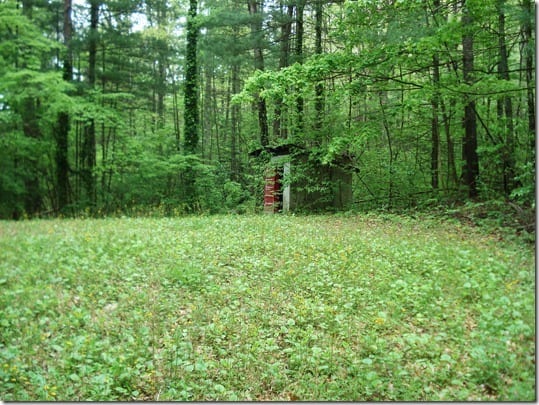 As with any lake, it is fed by the not-so-scenic drain, 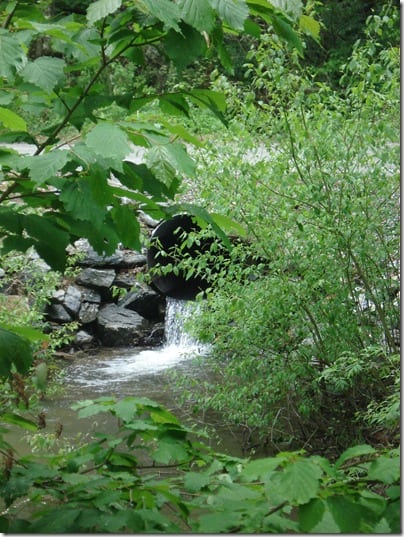 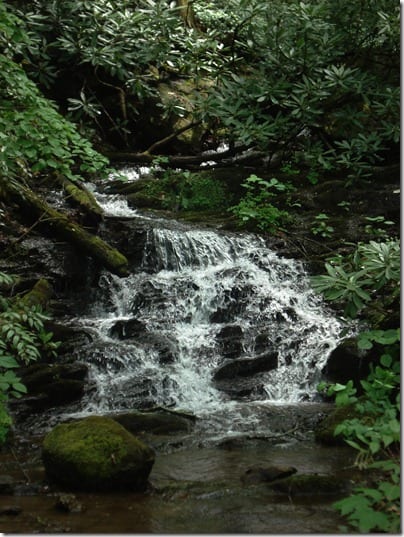 One of the things that struck me about the lake was the architecture, which is quite a bit different from lakes in Alabama. They love the branchy look in NC. 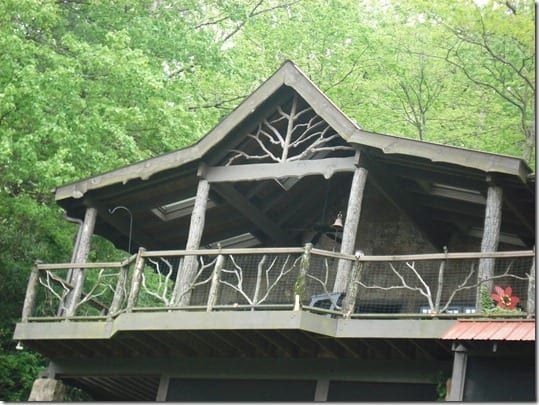 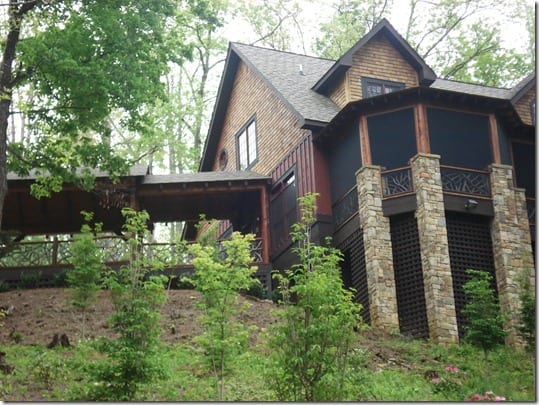 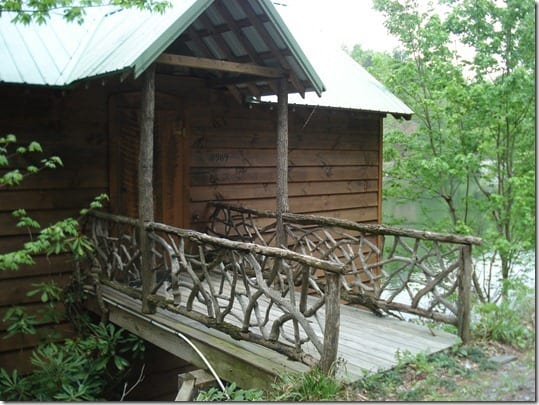 They even get all architchturey with their boathouses, which incidentally, are pretty much all you see on the water. 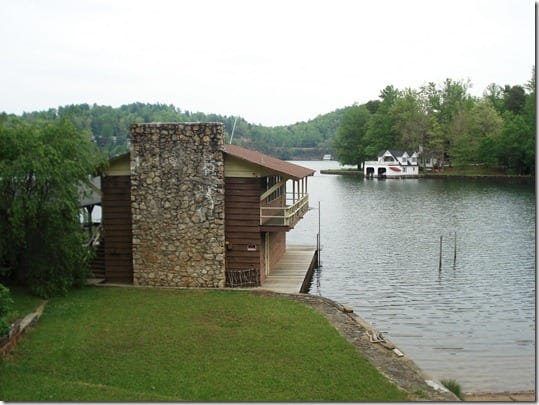 The banks of Lake Summit are pretty steep.

So everybody has their boathouse in the water and their house-house across the street up the hill. So everywhere you look, there are stairs leading up the banks.

And lots of them are really cool stairs: 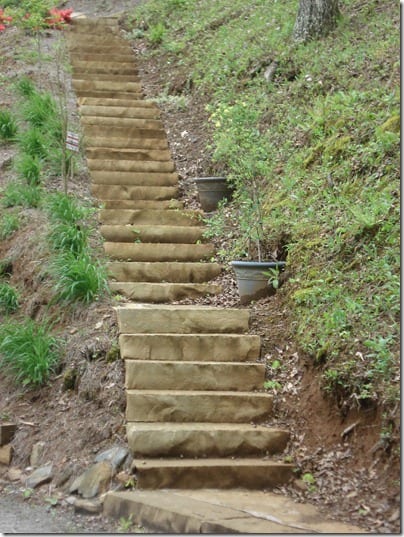 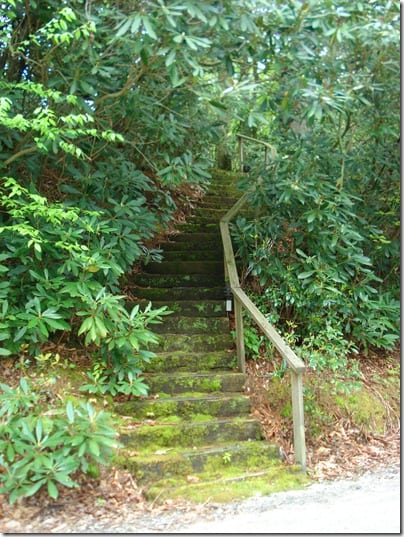 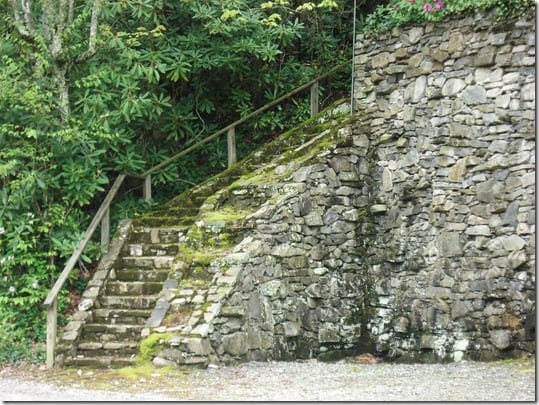 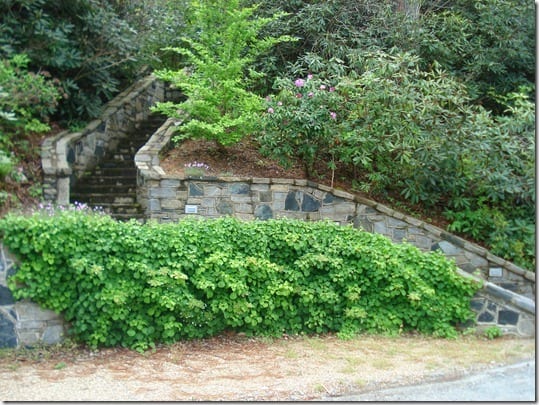 See what I mean? Of course, some of the stairs look downright exhausting. 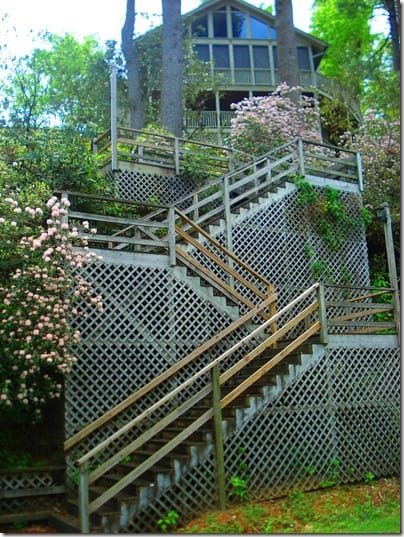 There are old bridges for people. 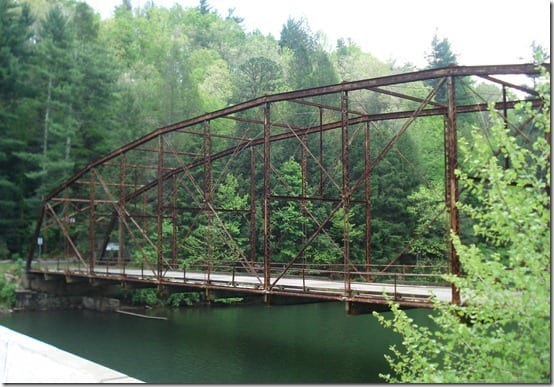 And old bridges for trains. 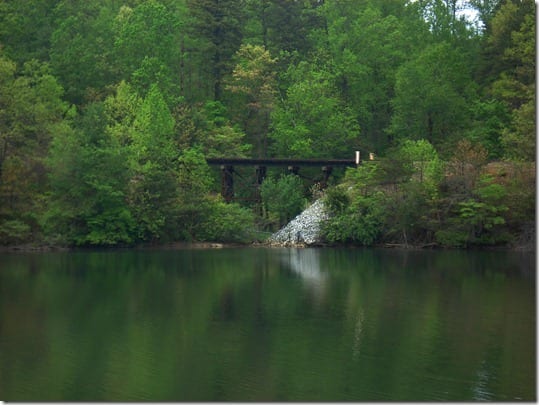 Which brings me to the adventurous part of this story. The shortest route (9 miles) around this lake included this section of train trestle: 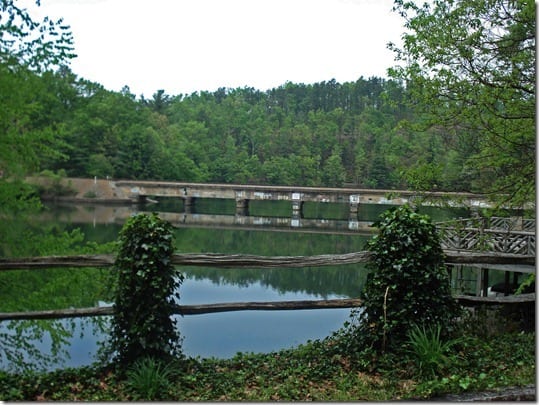 From the aerial view of Google maps, I knew that this was the only way.  When I told Rachel about my train trestle running plans, she forbade me to try it, citing the inconvenience of having to drive the 6 hour trip home with no Daddy too difficult to take on.

The only other option was to add two miles and a couple of huge hills. I was psyched up for the mad sprint across the bridge, so as I approached it, I found myself passing PRIVATE PROPERTY and NO TRESSPASING signs, figuring my headphones & running attire look would buy me a few seconds of confusion to dodge the shotgun shells.

As I wound around into someone’s backyard I found the ‘access’ to the train bridge. Google maps is sorely lacking in street views in private backyards, so I was surprised to find barbed wire and a fence to climb.

I stared at this for awhile, and pondered climbing the fence, reaching up and using the track itself to pull myself up onto the bridge. In this challenge of mind over matter, mind won.

I finally resigned to running the extra two miles, fled the private property, and started up the long winding hill.  At least the kids would still have a dad. 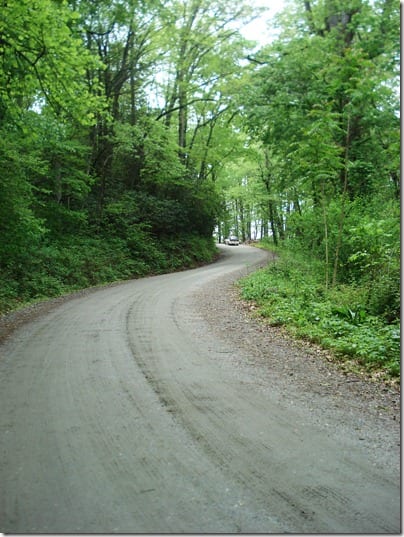 About half a mile up the hill, what’s this? Unprotected access to the train track?? 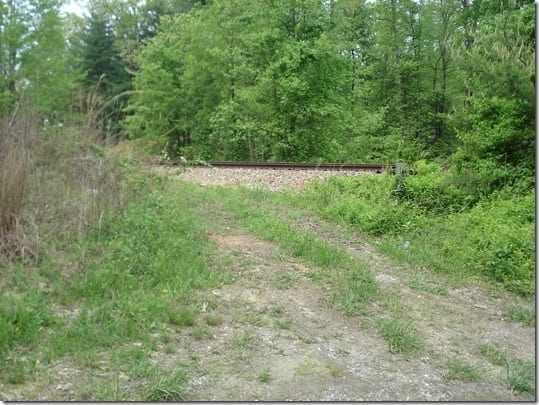 Hmmm, I know where this leads. 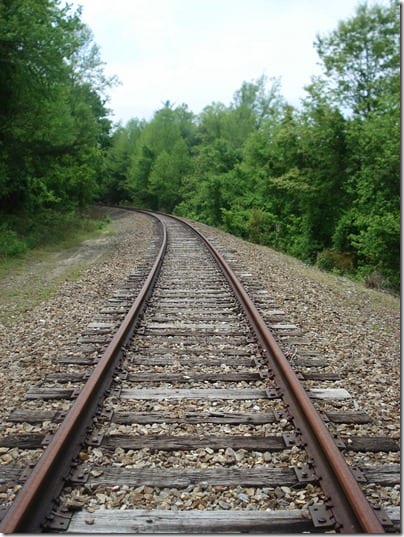 Let me tell you, running on railroad ties is awkward. They are spaced perfectly not to mesh with any human stride. It is an ungraceful hoppity skippity situation.

So I hoppity skip-ran to the bridge. 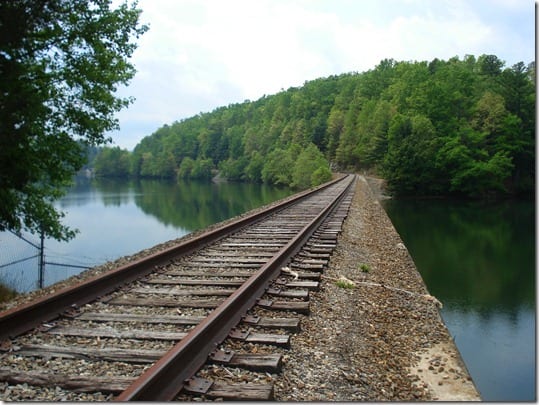 This was it. Just a hundred yards or so of nowhere to go, if by chance a train came along, in the grand tradition of Stand By Me.

Well, nowhere to go except into the lake. With my camera, iPhone, headphones, and all. I didn’t know how deep it was, but I figured feet first it wouldn’t be too bad, at least not nearly so bad as the alternative.

I got down on my knees and put my ear on the track, Cherokee-style.

All I could hear was my own heart pounding.

I hadn’t heard a single train since I got to the lake, but the track was obviously in use. There was even fresh oil in places dripped on the track by my potential killer.

I took a deep breath, and awkwardly began my sprint across the bridge.

And, luckily for my wife, I lived.

No train ever came.

Just the peaceful lake, wafting evergreen, asking my heart to please be a little quieter. 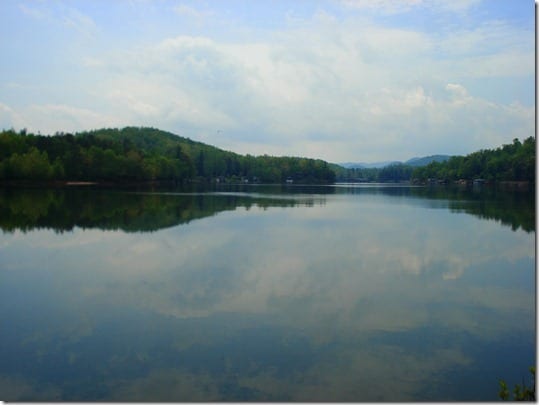 14 thoughts on “Serenity and Stupidity.”