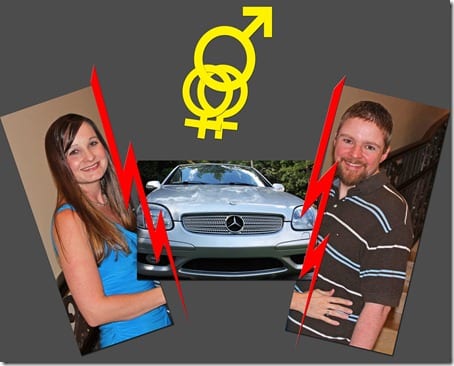 We were invited to dinner with three other couples.  We arranged a babysitter (the fabulous Giann – don’t even try to steal her from us – she’s all ours), and made our plans.

Chris texted me multiple times, expressing his anticipation and excitement.

“I can’t wait to go out alone with you!”

“It’s only our second date in my new car!”

“I will even leave Ingrid’s top up for you.”

(I’m not a fan of the windblown look.)

(And yes, Ingrid was the good German name he bestowed upon her, named after the glamorous Ingrid Bergman.)

Giann arrived, and as we were giving instructions, she asked for a flashlight – just in case the power went out.

“What?  I don’t think it’s supposed to get bad tonight.”

I thought she was being a bit on the paranoid side, but hey – she’s seventeen – you’ve got to respect her preparedness.

We arrived at Cocina Superior and joined our friends on the patio overlooking the drain-ditch-posing-as-a-stream.

We ate.  We chatted.  We watched ridiculous YouTube videos.  We laughed at Mickey Ferguson.

Then I got a text from Giann.

“Hey, what should I do if the storm turns bad?  I will grab Noah from the bed and Ali and go downstairs if it gets extreme…anything else I should do?”

I looked at the message, puzzled.  I looked out at the sky.

I turned to Chris.  “Hey babe – can you pull up the radar on your phone?  Giann seems to think the weather is going to get bad.”

Chris pulled it up and studied it… “Eh, I don’t think it’s going to.  Tell her not to worry.”

Seeing as how my husband is very storm-sensitive, I knew all would be okay, so I texted and told her not to worry too much.

Then, immediately, the sky went dark.

Rain came out of nowhere and began blowing towards our table.

Waiters came around and rolled large glass doors down around us.

It says here… all Birmingham residents need to be in their safe place and away from windows immediately.”

And then the power flickered.

It came back on for a moment, and then it left entirely, abandoning us on the extremely dark, storm-surrounded porch.

We all managed to trip our way indoors.  If you can call it indoors – it was also surrounded by glass.  We stumbled around in the dark, trying not to knock anyone’s plates or Margaritas off of their tables.

And then I got another text from Giann.

By now, Chris was glued to the radar, and it was about to get much worse.

All I could think about was poor Giann, now in a completely pitch-black house with a storm raging outside and trying to decide if she should take OUR kids to the basement.

Later, Giann shared her side of the story with me…

My Mom kept texting and asking me if I was following Spann’s updates on Twitter.

Of course I was.

I told her I would be watching the weather and if it got bad, I had an emergency plan.

After I put Ali to bed (Noah was already asleep), I made myself some coffee and started to work on some college stuff.

Then the lights started flickering.

And then the power went out.

The storm was screaming at me through the windows.

I very calmly…err…frantically went into the kitchen to fetch the lantern.  I turned it on and much to my dismay, the light was that of a bug zapping thing.  It wasn’t the comforting light of a nice lamp AT ALL.

I mean, seriously. I was expecting some psycho maniac to appear in the window and demand I give him something ANY SECOND.

So, I did what anybody would do in a situation like that – I brought the FIVE YEAR OLD downstairs to keep me company and protect me from the serial killers that were certainly wandering around the neighborhood right about now.

(Clearly, my worries were not in vain.)

I told Chris that I wanted to leave as soon as possible to get home.

“Okay – we should be safe to drive in about twenty minutes.”

I sat there, nervously fidgeting and checking my texts every 25 seconds, as our friends wondered why I couldn’t manage to carry on a conversation.

Giann texted a couple of times…

“When will y’all be headed home?”

“I brought Ali downstairs to keep me company…”

Finally, Chris said we were clear to leave, so we and the three other couples headed across the street to the adjoining mall’s parking garage.

We were parked on the same level with friends Blake and Nikki, so we walked out together.  The parking garage was lit by spooky, flickering half-light, clearly running on generators.  As we walked through the chilling silence, Nikki said, “Oh! We haven’t seen the new car yet!!”

(I secretly hoped they wouldn’t want to look TOO long – after all, I needed to get home.)

We got to Ingrid, and they oohed and aahed appropriately.  Chris hit the unlock button on his key.

I pulled out my key and hit the unlock button.

We both pounded our key fobs with the fervor of a Scandinavian Lady baking bread.

Finally, Chris put the key in the lock and turned it.

The shrill German alarm system mutilated the eerie silence, and we all scrambled to squeeze our fingers into our ears.

Chris hurriedly put the key in the ignition to start the car, which disables the alarm.

After 30 seconds of mind-exploding siren echoing off the walls of the empty parking deck, the noise quit.  But still no engine.

I panicked as I remembered that poor Giann was still in the dark house with our kids, and that my cell phone had no signal in this parking deck.

I walked out and checked my texts, and told her what was happening.

She was in post-storm mode, but still ill at ease.  In her words, later…

After the storm passed, I put Ali back in bed. I came back downstairs only to discover that it was really quiet.

So, I opened up my laptop and started to play some music.

I began texting Rachel and asking her when she would get here. And if so, could she warn me when approached the front door. Otherwise, I might start freaking out and start throwing stuff at her and Chris all while screaming bloody murder.

Yeah, I was that creeped out. And the zappy lantern light still wasn’t helping.

I walked back to Ingrid, hoping he’d righted her attitude.  He had not.

Our friends tried to help and offer advice, as they called and checked on their own childcare situation.

Minutes that felt like months passed.  I became more frantic.  The siren blasted several more times.  Chris was desperately trying to control his emotions, as he’d previously promised me that “Even if she strands me on the side of the road, I promise to never get angry about this car.  I know she’s impractical, but I love her.”

Chris walked out to the road to try and call Mercedes Roadside assistance.

And, as he did, the lights in the parking deck flickered.

And Blake, Nikki and I were left standing in complete, utter, desolate darkness.

A truck came charging out of the other parking deck, music blaring and tires screeching.  I tried in vain to see where Chris was, hoping that they didn’t run over my already emotionally destroyed husband.

I heard footsteps coming toward us.

We quickly agreed to leave The Sister Wife in the parking deck and get our award-winning friends to drive us home, since we’d all seen this movie and knew that the Zombies were going to descend upon us any minute.

We thanked Blake and Nikki repeatedly.

We apologized to Giann profusely.

And then Chris left the house again, this time in my quite reliable Flex, to get gas for our generator.

I sat in the dark house Googling Ingrid’s issues, and found the most likely cause: The PSE Pump (whatever that is) is housed in the trunk.  SLKs often have trunk leakage problems, which kills the PSE Pump.  And, since it had been raining all day and the symptoms fit, this sounded highly likely.

Also?  The PSE Pump is expensive.

So, what, Ingrid?? Can’t take a little rain???  Sounds like a bit of a Wicked Witch of the West complex to me!

Chris came back, threaded the generator cords through the window, plugged up the fridge and some lights, and sat down and read my findings.  We finally headed to bed after midnight, in no small amount of despair over a ruined date night.

As he was walking toward bed to fall in a heap of anguish and despondency, the power came back on.

We scrambled to turn off lights before they woke the kids.  He began redressing to go unhook, unthread, and turn off the generator.

He reconsidered: “You know, don’t worry about it.  The fridge can stay on the generator. It needs to run for a few hours. You know, burn off the old gas. Whatever.”

The next morning, we dropped Ali off with my Mom to go to Vacation Bible School, then headed to the mall.

She was still there.

(I had kinda hoped she’d have taken up with some other husband. The sneaky, hotwiring chop shop kind.)

My Dad met us there with his handy car-computer-reading machine, and they set to work.

Noah and I wandered into the mall, then came back, hoping it was fixed.

I let Noah spill his Fruit Loops all in my car, then took him back in the mall.  We were browsing Victoria’s Secret’s semi-annual sale when my Dad came and found me.

My Dad looked down at my hands, where I was holding two bras.  I could see it in his eyes – he wanted to make a Me vs. The Sister Wife joke so badly.  Or perhaps a suggestion that I was being too nice to Chris.  Or something.

I could have made a few myself.

But he was also a bit embarrassed, so he just said, “Uh…which way is the bathroom?”

I pointed him in the right direction and completed my purchase, all while having a seething conversation in my head.  With HER.

So what, Ingrid?? Wouldn’t start when I was in the parking lot, eh?  Waited till I left??  Maybe that’s why you quit working to begin with – you were mad that he brought me along on the date last night?  Well get used to it.  I was the FIRST wife – and I will always be the first wife!

I mean, what do you even contribute to the family??

At least I am an accountant, a jeans consultant, a blogger, and even do the laundry in a good week!

YOU won’t even keep the kids!!

“I wasn’t built to transport children,” you say.

All YOU do is take your top off at the end of the day to relieve The Husband’s stress on his way home from work!

And can you say HIGH MAINTENANCE??  I mean, I don’t even require mani/pedis – and you’ve got to have a new part in your first three weeks in the family?

I only ever have to have parts removed – a gall bladder, a foot bone, HUMAN BEINGS FROM MY ABDOMEN – but YOU – YOU NEED REPLACEMENT PARTS!!  Because you leak!!

Perhaps a bladder tack would do you good?

What followed was a day and a half of Ingrid lounging lazily at the mechanic’s shop while Flexi and I escorted Chris back and forth to work.

Of course, she wouldn’t misbehave for the mechanic (because I wasn’t around), and she finally came home with Chris, costing him nothing.

A miraculous healing, he says.

He joyfully welcomed the prodigal wife back into the family, practically killing the fatted calf to celebrate her free return, while I glared at her with distrust and resentment.

39 thoughts on “The Sister Wife Betrayal.”