(Click here to see the new Season Three Graphic – How to tell if you’re at risk of dying unexpectedly on Downton Abbey.) 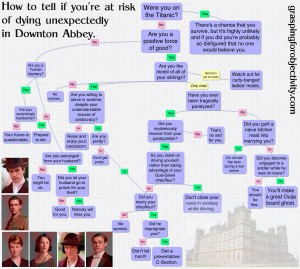 Chris and I are in full mourning this week.

We have been living in a dream world for the last three weeks, spending our every evening reveling in the utopia that is Downton Abbey.  And now it’s gone.

We were late to jump on the trendwagon, but when we did, we went all the way.  We have not been so engrossed in a parallel reality since Harry Potter.

…When we’ve not been watching Downton, we’ve been pining after what might happen next.

…When we have been watching Downton, we’ve been wishing there was more of it.

…We’ve even considered moving to England so that Season Three will come around quicker.  After all, we could still live in Birmingham – just the original one.

Clearly, we have a disease.

Now, for those of you who have no idea what I’m talking about, Downton Abbey is British show that just finished airing on PBS.  The abridged American version of Season One is available on Instant Netflix, and the full UK versions of Seasons One

are available at Amazon.  Season Three, tragically, won’t be out in the UK until September, and most likely not make it to the US until… (sob) … next January, at which time our full mourning will end.

The show is a period drama set in the early 1900’s that portrays the life of an aristocratic family and all of their servants.  And by the fact that it shows both realities of the goings on in a castle, it is astoundingly fascinating.

Downton constantly leaves us wondering about important issues, such as…

Why don’t I have a Lady’s Maid?  How have I lived this long without someone to dress and undress me on a daily basis?

And if it’s so shameful to have a maid serving in the dining room, then serving my kid’s dinner off of paper towels certainly must be worthy of hanging.

And wow, a Valet would come in so handy in my daily life!

(Which, by the way, it is important to note that this sort of valet is pronounced in such a way as to rhyme with “mallet”, not “ballet”.  It’s so much more delightfully British that way, after all.)

Downton has also given us much to talk about, thereby deepening our understanding of ourselves and our marriage.

After an episode last week, our pillow talk went as follows:

Chris: “Babe, if you ever realize that you have a thing for my Valet and find yourself inescapably attracted to him to the point of needing to fire him, just fire him and don’t tell me why.  I don’t need to know.  Okay?”

Me: “Are you KIDDING?? You would make me live with that guilt for the rest of my life without allowing me the opportunity for release and forgiveness??  That’s so awful and uncaring of you!!”

Chris: “Well YOU’RE the one contemplating messing around with my Valet.  And yet you still want ME to have to carry that burden too?!  The least you could do was carry the guilt by yourself and not involve me in it.”

Me: “I completely disagree.  It would totally put up a barrier in our marriage!!  I would never feel close to you again!”

Chris: “Well, OBVIOUSLY, there would already be a barrier up.  I don’t want to know, okay?”

Me: “Well, if you ever find yourself needing to fire one of my Lady’s Maids because of your attraction, I DO WANT TO KNOW.  I need to know if there are issues that we need to work on!! Geez.”

Chris: “Fine.  If I’m ever attracted to your Lady’s Maid, I promise to confess.  After I fire her.”

Thank goodness we have that cleared up.

However, I concede to the fact that Downton Abbey itself can be quite unclear and daunting if you’re not paying attention.  With that in mind, I made this handy reference guide for all of you – feel free to print it out and carry it with you at all times – or at least while watching Downton.

So much simpler now, don’t you agree?