Chris here, guest blogging. I suppose at this point I should take the title “Contributing Editor” or something significant like that.

I definitely had icicles in my moustache at one point. And I may or may not currently have diaper rash from excessive sweatage. But I’m glad I did it.

It wasn’t the idyllic leisurely jog through the City of Eden that I experienced last summer in San Diego.

No, quite the opposite.

It was competitive (with a clock mostly), brutally cold (if you’re from Alabama. I’m sure people in Juneau have a chuckle at Southern cold tolerance), and required beginning the day milling about in the dark waiting for the race to start.

I like to run. This is no secret. But I have always resisted the Mercedes events here in Birmingham because of the February date. Its always bitterly cold for the races. Except last year. I remember it being a beautiful day. Don’t get me wrong – I don’t want it to be 80, but maybe 35 or 40. Is above freezing too much to ask?

I decided to get over myself, man up, and do it. So I signed up for the Half-Marathon early this year, determined to survive.

If you have an inclination to try a distance event in February (c’mon – it’s for charity!), here are my tips:

Step 1. Grow a Beard. Yep, I put down the many-bladed hyper-marketed razor and let nature’s weather shield ease on out. Don’t underestimate the protective force of body hair.

Step 2. Buy spandex. There is no chafe protection like super tight neck to ankle spandex. Although awkwardly unattractive if worn alone by someone my size, when placed modestly underneath wind pants and a jacket, they provide a priceless service to the epidermis.

Step 3. Bodyglide. This product should be direct pyramid scheme marketed with downlines, commissions, the whole 9 yards. It is essential in an icy exercise event for the nether regions, and super helpful for any part of the body that doesn’t like to be excessively rubbed or exposed to the wind.

Step 4. Hand warmers. Nobody likes to carry dead weight, but the tiny little iron packets that heat up to 135-150 degrees inside your gloves are well worth carrying their diminutive weight.

I got up at 4, had coffee in a dark and quiet house as I contemplated the cold and prepared myself with 2 pairs of socks, earbags covered by a toboggan, and numerous OCD points of comfort and organization.

I made it downtown, and eased into the NIGHT with my aforementioned handwarmers sandwiched between 2 pairs of gloves. A couple of cold-induced port-o-let onesies later, I was milling around at the back of the starting chute as the sun came up, making conversation to pass the long minutes ‘til the start.

The gun went off, and I walked slowly forward with the frigid throng, and eventually passed the start line at a comfy running pace.

I warmed up quickly, and I have to say, it wasn’t nearly as cold as I thought it would be. The only clothes I threw away were the extra pair of gloves at about mile 8, but I was comfortable.

So comfortable in fact that when I snagged a napkin out of my pocket to drain my nose, I found the aforementioned icicles in my moustache.

Growing on my body.

And I was unaware of it.

When does this happen in life?

We (and by we, I mean me and the 10.5 – 11.5 min/mile pace crowd I was with), including my 2 chosen competition targets, Army Guy Carrying a Giant Shoulder Pack and Girl with The Bright Yellow Toboggan Mohawk, passed lots of interesting Birmingham neighborhoods, including 90’s trendy Southside, 00’s trendy Avondale, and 10’s trendy Railroad Park. We passed the yummy smelling Jim ‘N Nicks in 5 Points and the yummier smelling Merita Bakery on 1st Ave South. And lots of landmarks: the Civil Rights Museum, the Alabama Theater, old parks, and older churches. I got high five’s from official volunteers and the friendly guys at the Firehouse Shelter.

Somewhere between mile 11 and 12, I heard the short whoop-whoop of a police siren behind me giving a get-out-of-the-way love tap. The motorcycle cop was followed by another police car, escort vehicles, and the Fox 6 Storm Tracker Hummer with aft-mounted video camera, which was being followed by the full-marathon leader, Michael Wardian, who was churning his long legs at rate that really puts one in their athletic place.

I had just been lapped.

After marveling at the disparity between his fitness and my own, I soldiered on.

In the end, I met my dear sweet wife and was surprised by another friend at the finish line after collecting what has to be the coolest race medal out there. Who doesn’t love the classic cool of the Mercedes Benz emblem? 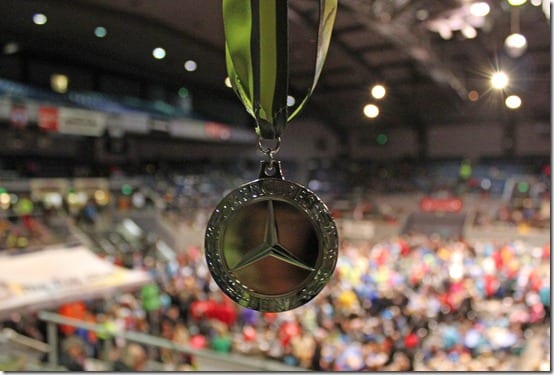 It turned out to be a beautiful, albeit frigid, day. I saw parts of my city I’d never seen before. I conquered the beast. And in way less time than I expected. I got the bling, and the beard is already gone. Overall, a total win. 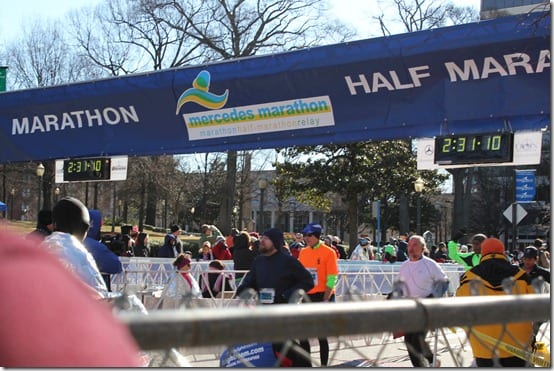 Rachel’s side of the story:

The above photo came at a price.

Chris told me to be downtown by 10 AM to see him finish. He did not, however, figure in the cold weather speed-up effect into this estimate.

Fortunately, there are tracking chips with each runner, and you can follow their progress online.

Unfortunately, these tracking chips only update at 6K, 10K, 15K, and the finish line.

So by the time I got his first estimated completion time of 9:28 AM, I already knew there was no way I could make it. One cannot speed up the process of getting two kids ready by an entire half an hour – this is a scientific impossibility.

I woke the kids up in a frenzy, rushed them into their clothes without bothering to brush any teeth, sped to church, dropped them off in Sunday School under the care of my parents, and then sped like a maniac downtown.

Halfway there, I realized I had forgotten my map.

I can find my way around downtown any day, but on this tight of a timeframe, I was worried about my ability to have quickness and accuracy.

I texted a friend who texted her sister who told me the best exit ramp to take. I prayed for a parking space and one appeared. Then I saw the runners and began running alongside them to the finish line…in my heels.

I ran for two blocks before realizing that those were the marathoners, not the half-marathoners, and I was running away from the finish line.

I began running in the opposite direction. In my heels.

I arrived at the finish line at 9:31 and fought my way up against the fence. I checked my phone – it hadn’t notified me of his finish yet. I was hopeful, yet doubtful.

I got my camera ready and waited.

And one minute later, I saw him coming.

Still panting from my ridiculously excessive four block run, I snapped a few photos of my husband finishing his first half-marathon. 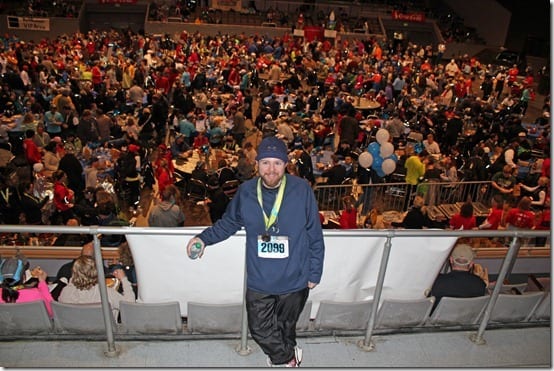 Okay, he’s the one who rocks. But I did run four blocks.