Chris and I started our weight loss initiative on April 6, aiming to meet our goals by October 1. My goal was to be 130 pounds. Which, after getting a new scale and coming to grips with the fact that I weighed more than I thought, meant that I needed to lose 26 pounds.

I wasn’t sure if I’d be able to meet my goal – weight has never come off easily for me. I’ve tried many different exercise routines and diets through the years and have rarely had any level of measurable success.

But I’d never tried counting calories before – all of my diet plans had been vague stabs in the dark, nothing objective and concrete. And since Chris had been successful with Lose It before, and it was FREE, I wanted to give it a try.

So…after entering everything I ate into Lose It religiously for 16 weeks, paired with a little (or a lot of) help from a nursing baby, I am already beyond my goal – at 128.6 pounds! 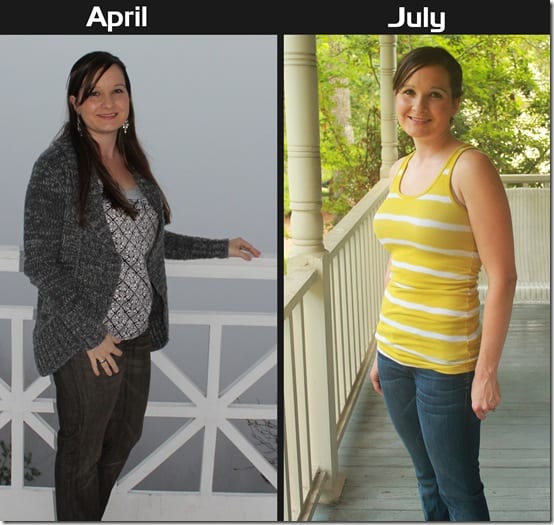 (I thought it would be a nice little reward to wear that poor shirt that I stretched within an inch of it’s life for all of my pregnancy shots. I can almost see it breathing a sigh of relief.)

Chris is also doing awesome – he has currently lost 31 pounds, and wants to lose 11 more by our deadline. 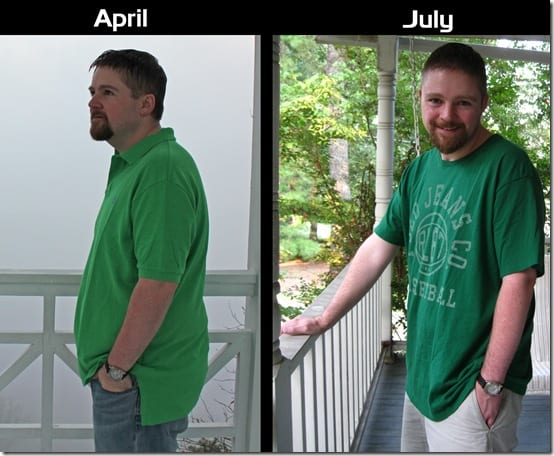 He’s turned it up since I reached my goal last week – I’ve been celebrating with French Fries and coke, and he’s put his nose to the ground, refusing even a bite of my delectable treats.

Competition is a healthy addition to any weight loss plan, after all.

So – what did we really have to change?

Basically, all that the Lose It App does is give you a calorie budget and provide a database of foods built in so that you can keep up with it. We still eat mostly the same things, but tracking it really makes us think about how much and how often we eat – I’m convinced that accountability alone solved over half of my problem.

When I cook, I calculate the calories of each recipe based on the ingredients. I’ve made small changes to help cut calories, like using 93/7 ground beef, no yolk egg noodles, and finding alternative sides to replace our usual buttery croissant rolls. But I still cooked all of our family favorite recipes with minimal tweaking.

Going out to eat hasn’t been as hard as I’d feared – by looking up and going nerdy analyzing our calories beforehand, we were able to make some easy changes to make our favorites fit into our calorie budget – here are some examples:

Things that we do eat less of than we used to: French Fries, coke, chicken fingers, potatoes of all kinds, ice cream, but NOT chocolate – as I said in our last update, chocolate is a dieting necessity.

Cheat Days: We have a cheat day about every three weeks (and even more often recently). I remember each one with a delightfully high level of fondness – we ate whatever we wanted and didn’t look at the calories, and it didn’t throw us off track at all.

Calorie Budget: I ate a little over 1,500 calories a day, lost about 1.75 pounds per week, and still made plenty of milk for Noah.

(He’s actually gotten rather chunky as proof, of which a lady at Target noticed yesterday and commented that I was FEEDING MY BABY TOO MUCH. I would have nominated her to be in the Awkwardly Intense Busybody Club except that her comment quite thrilled me, considering my former lactational issues.)

However, I will say that the lack of any exercise in my plan (Chris runs, but I’m not joining him due to two foot surgeries) does have the drawback of no belly toning. Smaller though it may be, my abs still sag, wrinkle, droop, and pillow with sadness at being stretched abusively for months on end, only to be rewarded with the intense pleasure of being hacked open, leaving muscles and epidermal layers permanently traumatized. 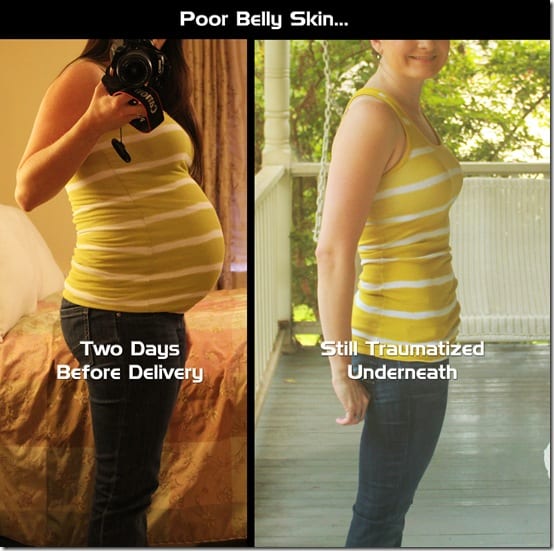 So. I’m going to utilize the rest of the time until our October 1 goal to work on my ab flab. I don’t know if it’s possible (especially since I have an aversion to exercise and I don’t remember a time when I had toned abs, even pre-hacking), so I am open to all of your ab-reclaiming recommendations.

Except for The Shred.

I don’t think I nor my hacked abs are brave enough to face that level of agony again quite yet.

85 thoughts on “Objectively Losing It.”