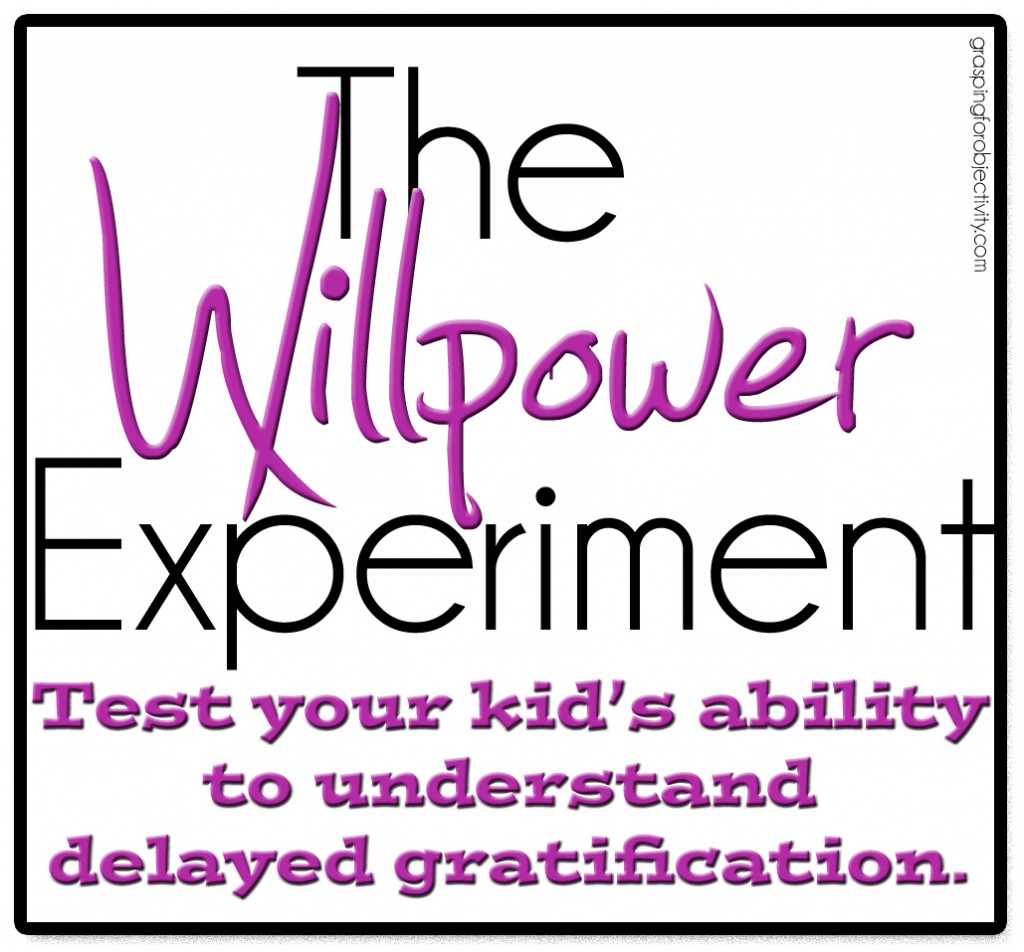 You know that bizarre phenomenon where you go to bed thinking “I’ve got to get up at 6 AM tomorrow”, and then you wake up, with no alarm, at 5:59?

Or does that just happen to me?

(Not recently, obviously – my baby alarm goes off EVERY morning before I’m ready to get up.)

Last week, I had a blog post alarm go off.  I wrote this post almost exactly two years ago, and said in the post that I would re-attempt it in two years.

And, alas, I just remembered it last Thursday.

So it’s time to retry The Willpower Experiment.

A quick recap so that you don’t have to go back and read the original post:

I’m all about a good experiment that uses my kid as a lab rat, and so when I read about Scientist Walter Mischel’s study on kids and willpower, I knew I HAD to try it.

(The only problem was that when I read about it, my kid was two years too young for it.)

(However, Age requirements never stop me from subjecting my kid to lab rat status.)

Back to the experiment.  He only set out to prove that willpower develops around the age of four.  He did this, but he also learned more than that: by following up with his 500 test subjects for the next four decades, he discovered more correlations with willpower at an early age.

He learned that kids who were able to pass the willpower test at age four were significantly more successful in later life than the ones who didn’t.  They had better grades in school, made over 200 points higher scores on the SAT, went to better colleges, and got better jobs than the kids who could not grasp the concept of delayed gratification.

The test goes like this: you offer your kid a treat – chocolate, cookies, candy, whatever would tempt them.  You tell them that they can eat the treat now – it’s their treat – or, if they wait for you to come back, they can have MORE treats.  But if they eat the treat now, they won’t get more treats when you get back.  You then exit the room, leaving them to drool over their tempting treat.

My attempt of this experiment when Ali was 2 1/2 was a resounding failure – but a pretty dang cute failure:

At least I proved that willpower does not, at all, develop at 2 1/2.

So technically, I should have done this right at her fourth birthday, but unfortunately, I set my mental alarm clock for “two years later” instead of “age four”, so here’s the repeat, at age 4 1/2.

(Note: I left the room for about six minutes, but I significantly sped up the “waiting” part of the video so that you could see what Ali did, but you didn’t have to wait six minutes to do so.)

Now whether this test proves anything about Ali’s future or not is quite skeptical, but it does prove something about my counting skills: the first thing she said after she finished shoving the jellybeans down her throat was that she counted those jellybeans while she waited for me, and there were only seven, not eight.

Hopefully, she’ll at least be more successful at counting than her Mother.

33 thoughts on “A Revisit to The Willpower Experiment.”