It was at least six years ago…

It was one of those dreams that you wake up wishing you could return to…and that you remember for the rest of your life.

I dreamed that I had a miniature Giraffe.

He came up to my knees.  And he was perfectly adorable.

We kept him on our back porch, but he was also house trained.  In fact, he was good at going up the stairs, but tended to topple head-and-neck-over-heels when trying to go downstairs.

(Giraffes are not, after all, built like mountain goats.)

Since that wonderful night, I’ve always wanted that min-EYE-a-ture Giraffe for real – after all, Giraffes are one of my favorite animals – I‘ve even been known to let them wrap their tongue around me. 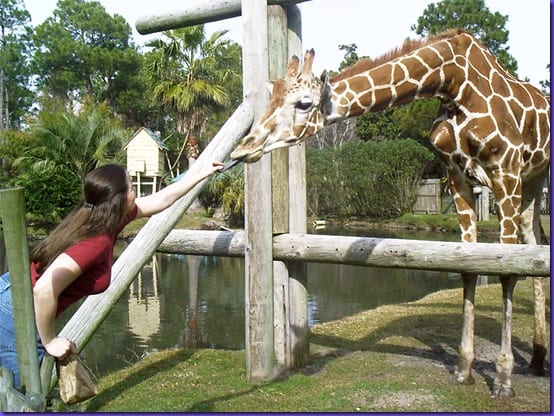 There was a DirectTV commercial, featuring none other than….

Did you see him??

Was he not as perfectly adorably cute as he was in my dream?

Oh yeah.. you didn’t see my dream.  But trust me – he is.  They totally stole him DIRECTLY out of my dream.

When I saw the commercial for the first time, I gleefully pointed him out to Chris (who also remembered my dream, since I talked about nothing else but wanting a min-EYE-a-ture Giraffe for weeks afterward), but immediately wrote it off as a camera trick.

When, thanks to my friends Kristen and Daniel on Twitter, I discovered the Russian secret that is Sokoblovsky Farms: The breeder of the As Seen On TV PETITE LAP GIRAFFES!!! 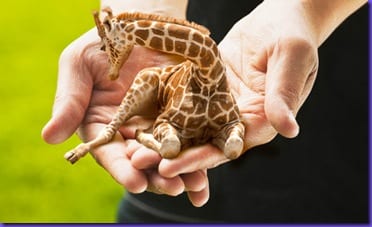 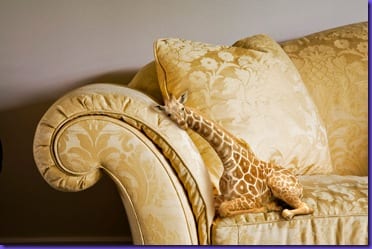 And their web site is fabulous…

You can watch the what the giraffes are doing RIGHT NOW on their live web cam!!

And read the charmingly bad English description of how they created them!!

Obviously, I clicked the “I WANT GIRAFFE clicking here” button as quickly as I could, and the following message immediately popped up:

“Congratulations!!! You make 6651 on waiting list for petite lap giraffe. You can expect giraffe in fall 11238! Then you will be most happy. Share greatest news with family on the facebook or tweeter.”

…and I called the 1-800 number at the bottom of the site to hear a recording of a thick, fake Russian accent tell me about the Lap Giraffes…

And, just like the crushing moment that I realized that Santa Claus wasn’t real, my dreams of there really being min-EYE-a-ture Giraffes in the world vanished in a pit of disappointing despair.

I realized that Sokoblovsky Farms was completely fabricated, and was just a stinkin’ BRILLIANT addition to DirecTV’s marketing campaign.

But for just a minute, they’d convinced me that my dreams had come true – quite literally.  But the resulting despondency was totally worth the exhilaration of believing – even if for a moment.

And even if I did win myself the title of “Sucker of the Year”.

57 thoughts on “Yes, Virginia, There is a Miniature Giraffe.”