Since I have been open in the past with my struggles when Ali was a newborn and about my fears about doing it all over again, I wanted to honestly share my experiences with Noah as well, even if it forces me to be serious for a post every now and then.  I hope you don’t mind, and I hope that at maybe one or two other Mommies (or future Mommies) can be encouraged by my overly-honest meanderings.

I’ve been intending to write a “check-up” post for several weeks now, and the funny thing is, every time I’ve thought about what I would say, it’s changed drastically.  As quickly as newborn’s little bodies grow and change, so do their habits, issues, difficulties, and joys.

The first few weeks were SO much easier and more delightful than I expected.  As I mentioned in Noah’s Birth Story, my surprising and immediate bond with him really made the initial transition easy, despite quite a few complicating health factors that I’ve had.  I fell in love with him, and he was immediately attached and responsive to me in a very special and endearing way.

But in the last two weeks, it began to get more difficult.  Noah started to get much more opinionated, in a screaming kind of way.  It wasn’t a lack of milk issue like Ali – he was becoming a picky sleeper.  Although he started sleeping great at night, he was quite insistent that he would ONLY sleep in his bed or pack and play, even though he was still wanting to sleep nearly constantly.  He was easily awakened, would not sleep in his car seat, or if he did fall asleep, he wouldn’t stay asleep when the car stopped.  And, of course, became very unhappy if he got overtired.

And so, on the days when we had to go somewhere, he would end up screaming for most of our outing, which is very wearying and brought back memories of Ali’s unbelievably unhappy months.

After a few days of his screaming, I had allowed myself to get into a place where my perspective was skewed negatively.  Rather that the longsuffering, patient, and loving attitude that I had been blessed with in the early weeks, I found myself thinking thoughts like “I can’t take one more stressful thing”, or “this, too??” – allowing every new challenging moment to make me more and more stressed, instead of just rolling with it and knowing it would get better.

And so, when Noah had a really poor night of sleep last Tuesday night, I found myself, in the middle of the night, in a very desperate place.  I knew my attitude wasn’t right, as I found myself wondering why he wasn’t doing what I “expected” him to do, and feeling a little bit resentful toward him – a feeling I knew all too well from when Ali was a baby.

(It may sound awful for someone to feel resentment towards a baby, but it’s amazing and surprising what feelings a baby can bring out in you – especially in the middle of the night.)

As I nursed him that night, I prayed for God to refresh my perspective and return my mind to a healthy focus.

And then, instead of a scripture passage like usual, the oddest words of wisdom popped into my head…a quote from our beloved Weatherman, James Spann.

First, a bit of background for those of you who don’t live in Alabama.  James Spann is the most famous meteorologist in our state.  Amidst all of the campy local newscasters, Mr. Spann is a distinguished, genuine, brilliant meteorologist that is nationally known and respected.  And so, anytime there is an impending weather event, whether it be a tornado, a hurricane, or snow, we all immediately tune in to James’ weather reports and blog to find out THE forecast.

And, since we’ve had a VERY unusually high amount of snow events in the past two years, I’ve found myself reading his blog and following him on twitter more closely than usual.  And on all of his potential-snow posts (which are addressing a state of people who LOVE our rare snow occurrences), he always has the same disclaimer at the bottom:

And, with any Alabama snow event, there will ALWAYS be surprises.

That was the quote that popped into my head.

And, when applied to newborns, truer words could not be spoken.

And that last phrase was the biggest perspective changer for me.  I cannot put expectations on a Newborn, or I will just end up frustrated.

No matter how much I like schedules and plans and knowing what to expect when, I must remember that Noah is under two months old!  Even if he’s done the same thing every day for three weeks, I shouldn’t be surprised if, all of a sudden, he does the exact opposite thing tomorrow.  He is absolutely going to do unexpected things, and I should not resent him because of it!

And so, as odd as it sounds, my encouragement for the week was a Meteorologist’s tag line.  Some things will elate me, some things will disappoint me, and there will always be surprises.  And since I’ve reset my expectation to be “expect surprises”, I haven’t been nearly as frustrated.

And, because it’s the way God likes to do things, Noah got much happier and began sleeping much better – right AFTER I learned the lesson that I needed to learn.

And, of course, the adorable dimpled smile that’s been peeking out more and more often keeps my heart totally in love with this sweet, surprising little creation. 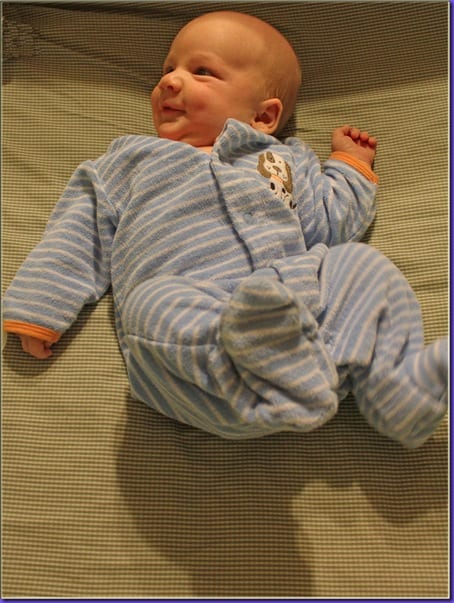