Disclaimer: This post may only make sense if you’ve seen at least 50 Dora The Explorer episodes, preferably repeatedly ad nauseum.

I sometimes wonder if Ali secretly thinks that Dora isn’t exactly the brightest cartoon in the tube. 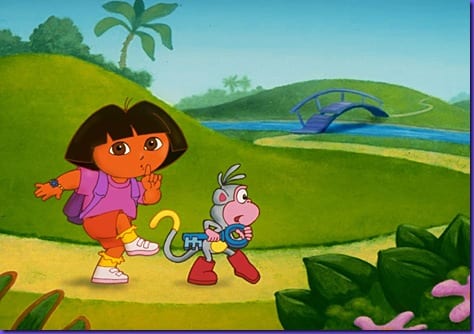 Because she doesn’t exactly seem to get it.

Dora turns and looks directly at Ali, asks a question such as “Do you see Swiper?? Tell me if you see Swiper!!!”, and then waits, all while awkwardly staring and blinking in Ali’s general direction.

Ali stares, not saying a word.

Ali sees Swiper peek out from behind the bushes…but she still doesn’t say a word.

Dora, responding to Ali’s nonexistent help: “What?? Swiper’s behind me??”

Dora goes through her odd chant that magically keeps Swiper from swiping (but only if she’s able to repeat it THREE times – no more, no less), and then turns to Ali again.

“Thank you SO MUCH for telling me that Swiper was there!”

Ali just stares, always knowing that Dora will think she helped, regardless of whether she actually does or not.

But if Dora could REALLY see Ali’s complete unwillingness to help her and indifference to her immediate peril… I think it’d go something like this:

Swiper pops up behind Dora, looks to the right, looks to the left, looks at Ali, realizes that Ali isn’t going to tell Dora that he’s there, and jumps out of the bushes and puts Dora in a chokehold.

Dora, gagging: “ACK!!  Why didn’t you tell me that Swiper was right behind me, you lazy brat?!?  Don’t you realize I’m not exactly three dimensional?? It’s not like I can turn around as easily as you!!”

Dora manages to wrangle free of the chokehold and run down the path.

Dora begins singing her braggy song and shaking her butt in Typical-Dora-Fashion.

Dora stops singing and glares at Ali…“SING, YOU LITTLE PUNK!!!”

Dora storms off to the next obstacle in her journey.  She arrives at The Laughing Mountain…

“OH NO! This mountain is so steep!! How will I ever climb it?  I’ll need YOUR HELP! Put your hands up like this and CLIMB! CLIMB!”

“Listen here, kid.  Just because your Mommy is letting you sit comatose in front of the television doesn’t give you the right to be THIS lazy.  Here I am trying to climb this mountain that has a 99% grade but will magically only have a 20% grade when I start climbing it, and you’re too lethargic to even pretend you’re climbing a mountain?!?  I wish I’d thrown you into the Gooey Geyser three episodes back!!”

In one last leap into anger-induced insanity, Dora begins dancing around with wild and dangerous eyes, and gets all sarcastic with her song…

Because of you, Boots was eaten by snakes,

you did it, hooray!

You wouldn’t help, so the trolls threw Benny off the bridge,

you did it, hooray!

I’m going to have severe back problems from carrying a vacuum in my back pack,

I, on the other hand, would be much more entertained – if only Dora could see.

26 thoughts on “Dora The Ignorer: If Dora Could See.”