Chris ran into the room excitedly yesterday… “Look what I found!!!”

“The heartbeat monitor we used with Ali!! We need to try it with Noah!” 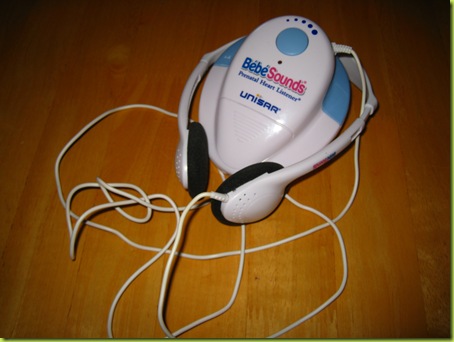 “You DO remember that thing never worked with Ali, right? We never heard anything but gurgles.”

“I know…but maybe it will be different with him!!”

(Reminder: Chris is nesting. I am not.)

So, being the nice wife that I was, humored him.

He turned it on, nothing.

“Did you stick it on your tongue??”

(You see, we have this long running thing that I grew up in a family that stuck the two live ends of 9-volt batteries on their tongues to see if they were still good. Chris had never heard of such, and is horrified (and obviously scared) by the thought. So, of course, I like to bring up my bravery in such matters any chance I get.)

“Well it might be good then! You need to stick it on your tongue and see.”

I couldn’t back down from my Reputation of Bravery, so I licked the battery.

(He puts it back in and turns it on..and it works.)

“Well how about that…I must have hit the wrong button.”

“Nothing. Here – you do it – maybe you’ll have better luck.”

He ran in to listen, and it thrilled him to his nesting soul.

But, despite his excitement about HEARING Noah, we’re both decisivity challenged about SEEING him again.

And so, since neither of us can make a decision and Chris left it up to me and I’m really not feeling like making any more decisions right now (maybe the battery fried that part of my brain), I’m taking input.

So there you go, blog-world.

To see or not to see?

And yes, either way, I promise not to lick any more batteries.