If today had been a football Saturday and Chris had woken me up at that time to head to Tuscaloosa, I’d still be grumbling tonight.

As it was, I magically rolled out of bed and got ready for my flight without complaining for a second.

I explained to Chris that I must have woken up perfectly in my sleep cycle, as opposed to (all) football Saturdays.

I think he called that something like “Bull Crap”, if I remember correctly.

For some reason, it hit me on the way to the airport that I would be expected to go through an x-ray machine…and I started wondering what to do.

I got to check-in, and there were no signs screaming “STOP! PREGNANT LADIES! DON’T LET US SCAN YOU! WE WILL MAIM YOUR BABY!!” – surely there’s a lawsuit opportunity out there somewhere.

I asked the TSA agent as sweetly and non-terroristically as possible what I could do since I was pregnant and wasn’t supposed to be x-rayed.

She just as sweetly told me that instead, I was welcome to choose to be groped with an intensive thoroughness by another woman in front of the whole line of gawking onlookers.

I agreed. And jotted down a mental note in my Book of Guilt to hold over Noah’s head.

So they put me in the glass locking terrorist booth (I really think I should have been allowed to announce that my quarantine was voluntary) and left me to marinate in my embarrassment for a few minutes, after which my new best friend came to feel me up.

And wondered if that was a baby bump or a bomb.

Once I escaped got on the plane, the guy next to me asked me where I was going, and when I said the magical “BlogHer” word, I was thrilled when the girl across the aisle AND the girl directly behind me piped up that they were coming too.

Which is amazing since I’ve been using Twitter to try to locate other Alabama Bloggers going for a month, and have only found all of ONE.

So apparently the whole state IS here – they just won’t answer my tweets.

The 4:15 wake-up time and 6:42 take-off time totally paid off when I landed in New York at 10:00 am Eastern time. And, since the actual conference doesn’t start until tomorrow, I even managed to meet up with Ann Marie, my friend who was leaving the city today.

We walked half a mile to the Hell’s Kitchen district to eat lunch at a Greek Restaurant that I found on Urban Spoon (me walking with a VERY poor shoeing choice that my feet are still a throbbing blistery mess from), only to see the place closed down, chairs on tables and lights out.

My immediate thought was – this is a moment that Chris would never let happen. He would have TOTALLY called ahead before turning his feet into a throbbing blistery mess. My second thought: this is eerily similar to a certain embarrassing story from last year’s BlogHer…

But then I saw that they had another entrance, and got hopeful. Sure enough – they just had part of their restaurant open for lunch.

After our delicious Greekness, Ann Marie mercifully took me back on the Subways for the sake of my feet, and taught me a very important lesson: I should NEVER try to manage the Subways on my own. I would seriously end up in Queens with Eddie Murphy and the SoulGlo guy.

I spent the rest of the afternoon trying to figure out what I was going to do with my now-blistered-and-completely-unusable feet, and how I was going to manage to wear my open toed, sparkly heels for the Ralph Lauren event.

I somehow managed to coddle them enough with the help of some blister band-aids to accept the punishment of my shoes, and had an awesome time at Ralph Lauren, which I will blog about later (mainly because, football or not, 4:15 AM was a LONG time ago). But I was thrilled that one of our party hostesses, Michelle, was my Baby Bump twin: 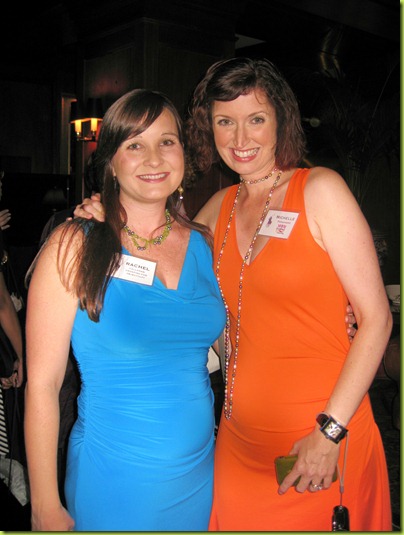 …and with our dress color combination, it’s a REALLY good thing it wasn’t a football Saturday.

11 thoughts on “BlogHer Stream of Consciousness : Day One”