Yesterday I had my REAL mid-way through my pregnancy sonogram.

(And yes, it’s true, I’ve had like five sonograms now. I don’t know how I’ve managed to rack up that many, although my tilted unicorn was definitely helpful in the process.)

Noah checked out great – a couple of days ahead of schedule, and, much to Chris’ relief, still most definitely a boy.

I think Chris’ exact request to the sonogram tech was, “You still see a twig and berries, right?”

(Because we’re all about correct anatomical terminology around here.)

Her response, “Congratulations – It didn’t fall off.”

She got the coveted Adorable Side-view Shot… 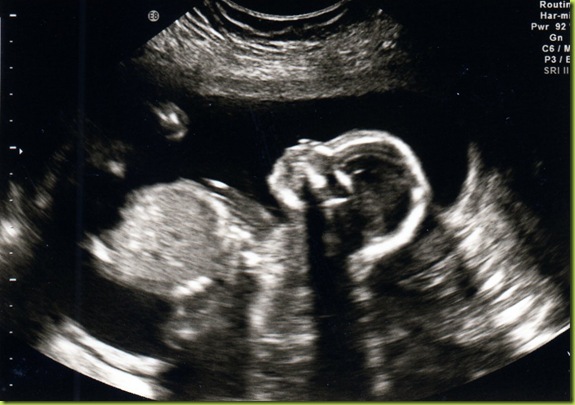 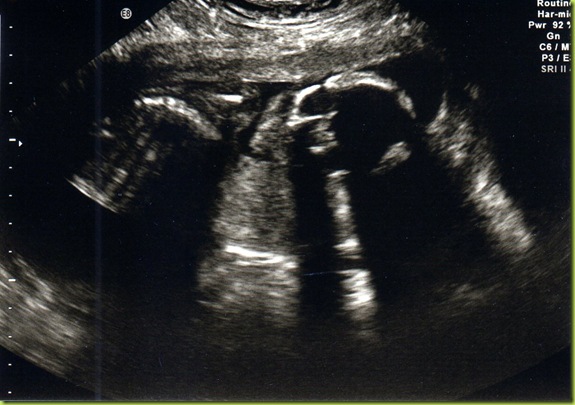 The rare but fascinating Spooky-Skeletor-Evilly-Laughing Shot… 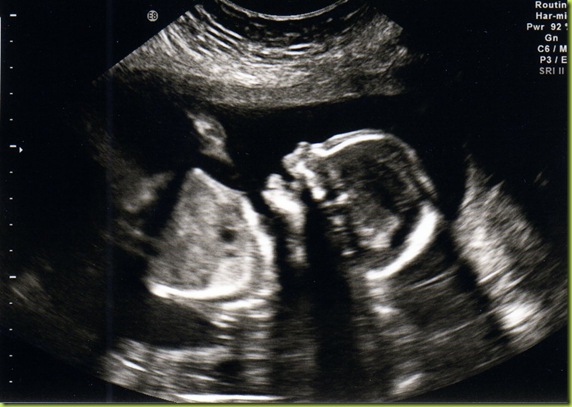 And, not do be outdone by his sister (albeit a little less coordinated) , Noah gave us a thumbs up: 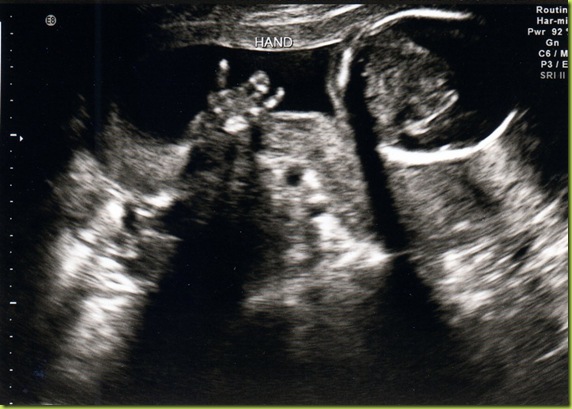 Chris left after the fun part and left me to face the torturous part alone: the Weigh-In.

It’s an odd thing about the female species…even if we’re pregnant, even though we’re supposed to gain weight, and even if we’ve gained less than we “could have” by now, the feeling of seeing the scale tip upwards is NEVER, EVER a pleasant feeling.

ESPECIALLY when someone else is doing the weighing.

And I knew I had most definitely hit a growth spurt in the past week, because two people had asked me if I was pregnant that day – a first.

Which, if someone is willing to ask, that means I’m big enough that they really knew without a shadow of a doubt that I was, indeed, pregnant. That, or they were under the influence of Crazy-Inducing-Pregnancy-Pheromones.

So, knowing that I had gained weight but wasn’t ready to see TOO painful of numbers on The Official Doctor’s Scale, I had spent the morning analytically scouring my closet, produce scale in hand, to find the absolute lightest gauze shirt that I own.

(Okay, I didn’t really have a produce scale. But I wish I’d thought of it before now.)

The only problem was, I wore the lightest thing I could find last time, too.

(Good thing I bought something lighter in the meantime.)

At this rate, by the time I’m eight months pregnant, I’m going to show up for my weigh-in, at the end of November no less, looking like Bikini Girl on American Idol.

Except for the fact that I would look NOTHING like Bikini Girl on American Idol, and that’s when I’m NOT eight months pregnant.

But let’s not dwell on that.

In other news, Skeletor Noah and I are flying out in the morning (earlier than either of us EVER get up) for New York for our first Mommy/Son bonding trip.

Because I hear that he absolutely LOVES to go to blogging events and all.