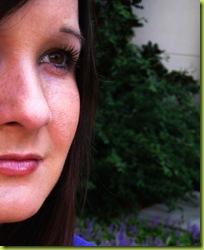 I smell a poopy diaper. In my kitchen.

How is that possible? And where is the smell coming from?

I never had psychotic scent episodes when I was pregnant with Ali.

In fact, I remember thinking that my friend Lydia was a bit…over the pregnancy edge… when, during her last pregnancy, after tearing her house apart DURING small group trying to find the smell of rotten garbage, she discovered that her pregnancy nose was interpreting Chris’ (very nice) cologne as rotten garbage, and very nicely asked him to not wear it in her house again until after her baby was delivered.

And at least Lydia primed Chris for understanding my psychoses as well.

I’m taking out the garbage when there’s merely one thing in it.

I’m washing my kid’s hair because it smells FUNKY. And it’s never smelled like anything but wonderfully sweet baby head before.

I’m texting my husband and telling him to NEVER. PUT. MY. FLOORMAT. IN. MY. CAR. AGAIN. Because two weeks ago Oreo rode in a box on top of my floormat and it still smells overwhelmingly like cat. MUCH more like cat than Oreo does.

Maybe God’s theory on this one is that we get all of our intense smelling out of the way now, so that our smell buds can burn away from the being over-stimulated so that when we have a newborn and would REALLY be disturbed by the aromas that are attacking us from every direction, we don’t even notice them.

Along with my floormats.

But luckily for Chris, his cologne still smells heavenly.

Disclaimer: I promise I will get back to normal, non-pregnancy topics as soon as possible. i.e., as soon as the nausea and smells of pregnancy leave me alone for two seconds together so that I can focus anything else.