So, in case I bored you so much yesterday with my Smoothie story that you didn’t make it to the end of the post yesterday, I am, indeed, pregnant!

Apparently, telling the world that you’re trying to get knocked up really helps with the process.

So now for all the FAQs:

I’m six and a half weeks along, with a due date of December 27th, almost two weeks from Ali’s fourth birthday.

I had a C-Section with Ali, and so it’s quasi-recommended that I have another, and if I decide to do so (and God doesn’t answer my prayers and send me into labor earlier), the C-Section date would be December 20th.

We found out we were pregnant April 19th, right before leaving for our family vacation.

We decided we wouldn’t tell Ali until we were ready to announce it to the world (for obvious three year old blabbermouthy reasons), but wanted to let her be a part in telling the fam anyway.

So I got her to write this card, of which she couldn’t read any of but “Mommy”: 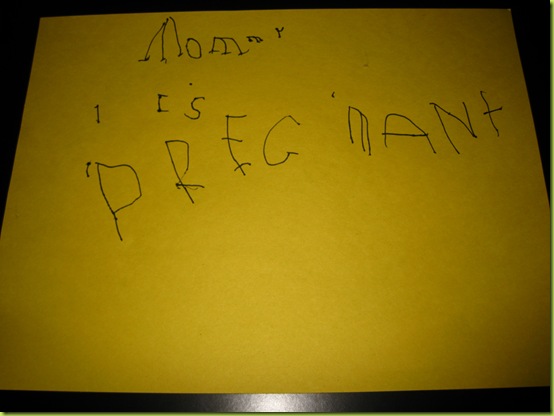 Friday morning on our family vacation, I told her excitedly that it was time to give Gramamma her card.

For the first time in her life, she said, “No, I don’t want to give ANYONE a card today.”

This was not part of the plan.

“Are you SURE, baby?? Gramamma and everyone else will be SO happy!”

“But you HAVE to! Gramamma will be so excited she’ll jump up and down!!”

She took the card from me in a huff, ran across the house to my Mom, handed it to her and said, “Jump up and down now, okay Gramamma?”

Excitement and happiness followed, the cause of which Ali had no clue, except that maybe they were all that thrilled with her writing abilities.

Later, Ali grumpily told me, “But Gramamma DIDN’T jump up and down.”

We finally told Ali yesterday that I had a baby in my tummy while we were waiting at the doctor’s office. Although she showed a little excitement, her response was much more geeky analytical:

Her first reaction, of course, was to go back to her eternal assumption, rub my boobs, and say “So the baby’s in here?”

“Well what is your baby’s name?”

“I want her to be a sister. Not a brother. And when will she be on the OUTSIDE of your tummy? And when will I have a baby in MY tummy?”

Later, after having a bit of time to process this new information, she asked, “So what kind of shoes is she wearing?”

When we got to the sonogram, Ali immediately said in wonder, “Well, look at that. Look. At. That.”

Apparently, she’s been hanging around a lot of old men lately.

As far as I go (don’t forget, everyone is supposed to continuously fawn all over the pregnant woman), I have been increasingly more and more nauseous every day, all day. Much more so than I was with Ali. I finally had the privilege of starting The Puking Phase yesterday morning.

But you know how wonderful pregnancy is? Even my puke came out as rainbows and sunshines.

(But I think I might wait a while to eat Lucky Charms again.)

Although she was pretty disturbed by me throwing up my Lucky Charms (why would I be so wasteful??), Ali has been handling my not-feeling-so-great-ness pretty well: 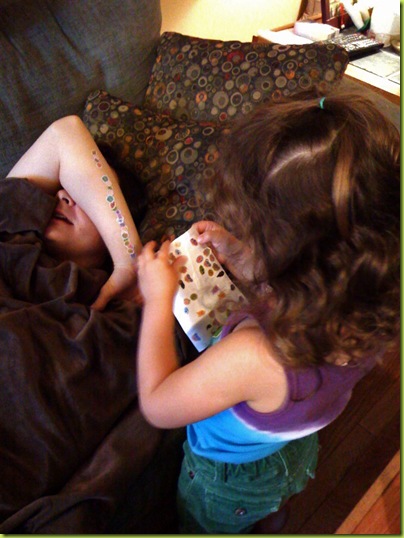 She has also been picking up on the nausea terminology a bit too much. Last week, we stopped by the office for a minute, and she sang quite loudly to my boss,

“You make me feel QUEEEEEEEASY.”

Since she was the one who taught me the song, I might have sung it back to her once or twice. It is, after all, quite catchy.