I have a condition – Sleepwalking. This condition has come and gone different times in my life, but has ultimately only landed me in the emergency room exactly once.

However, that fateful night at the ER was not the only scary situation I’ve gotten myself into due to said condition.

My condition is brought on by intense emotions, days, situations, and experiences. So naturally, my most serious “flare up” happened when I became a new Mom – the most life changing thing that’s ever happened to me.

The 24/7 overwhelmingness of Motherhood was quite simply…overwhelming to me. I wasn’t good at putting it down and being able to relax (something I’m really hoping to be much better at this next time).

Because of that, my dreams were consumed with Ali. I remember trying to convince myself (in my sleep) that “You are still Rachel. You are not just Ali’s Mother. You have an identity too.”

Besides that, though, I was constantly waking up in a blinding panic because Ali was in bed with us and shouldn’t have been.

(And this was complete nonsense because we’ve never co-slept with Ali a single night of her life.)

I could actually “see” her, and would pick her up and run her back to her room to put her in bed, only to find “real baby” in bed already.

But, in my confused and half awake state, I would gently place “fake baby” in the bed alongside of “real baby”.

Just in case – I figured it couldn’t hurt.

This pattern repeated itself night after night, but with a few variations.

I remember one night waking up to see fake baby on the cat perch. Panicked, I ran over to the other side of the room, picked fake baby up, dusted all of the cat hair off of her, and right before I ran her back to her room, fake baby meowed at me.

Poor Oreo. No wonder she doesn’t like that perch anymore.

Chris knew about fake baby, and we often talked about her as if she really lived in our house.

After writing all of this out, I’m thankful that he didn’t have me committed.

Luckily, fake baby moved out around the time Ali started sleeping through the night. I’m just really hoping that Newbie doesn’t bring along a fake baby of his or her own. 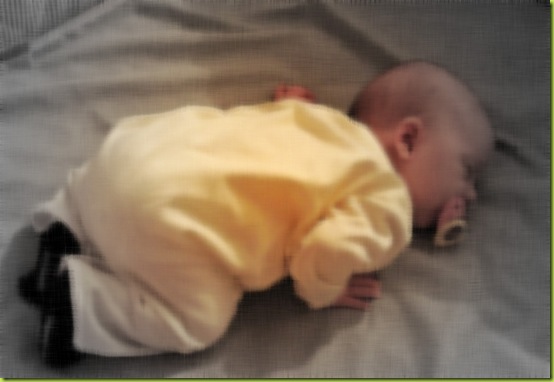 Because I really don’t want to be committed.

21 thoughts on “The Perils of Sleepwalking and Motherhood.”