If you’re looking for the investigative report on Uncle Joe’s Tot Locker, you can find it by clicking here. 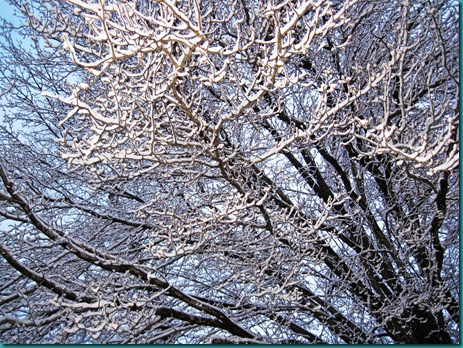 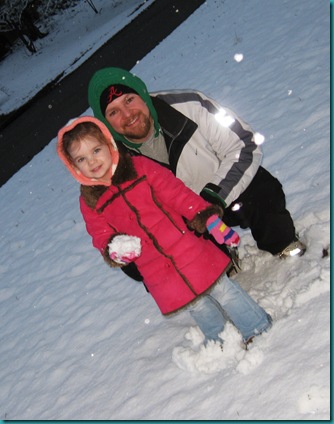 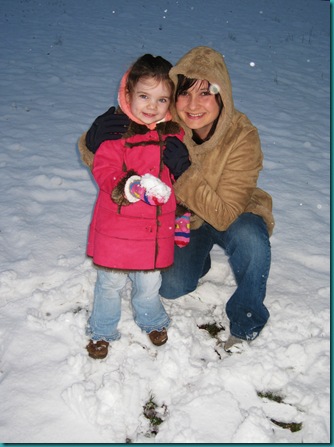 We had an awesome time in our snow, which has all escaped now except for the remains of dozens of snowmen making it look like The Great Snowy Massacre of 2010. But, in what will certainly be the first time in history, we are supposed to get TWO MORE INCHES OF SNOW TONIGHT.

So, the mass hysteria begins all over again….There will be NO bread and milk left anywhere in the state of Alabama after this weekend. And everyone will be watching the local news crawl again for their school and work closings.

Speaking of, Chris and I got to talking about the whole closings thing on Thursday..

What keeps someone from calling in and reporting that their business or school will be closed the next day? Surely the television stations don’t keep a list of authorized personnel that can call from each entity.

Then, the next day, when the boss calls and asks where you are, you just tell them, “Oh – I saw on NBC that our office was closed for today!!”

And also, what keeps people from calling in pranks?

And then, we saw it scroll by: “Uncle Joe’s Tot Locker will be closed on Friday.”

Obviously, we’re not the first ones to think of the prank idea.

Out of incredulous curiosity, I tried finding Uncle Joe’s in the yellow pages, white pages, and online, but can find no trace that such a place exists.

But, just in case there really is an Uncle Joe’s Tot Locker and you send your kids to day care there, let me qualify my statements by saying….you’re crazy.

Editor’s note: I later did some investigative journalism and discovered the true origin of Uncle Joe’s Tot Locker. To find the answers to all of your questions, click here.

In other news, I am completely shocked by how many people asked me for the recipe for snow cream, or asked me what in the world snow cream was – especially of my northern friends!

Apparently, snow cream is just a southern thing (ironically enough), AND a rare one at that.

(I totally had this idealistic picture that every time it snowed up north, y’all immediately went outside, collected your snow, and made yourself up a batch of snowy goodness. My worldview is forever changed by the fact that you don’t eat snow cream for breakfast every day.)

So, for those of you who asked, here’s to ever complex recipe for snow cream:

Now I know that today is Valentine’s Day and I’m supposed to write an ooshy gooshy post, but since that’s not really my thing, I figured I’d just tell you about our family’s Valentine’s gifts.

It started out with me getting very aggravated with mine.

APPARENTLY, it seemed that Chris had waited until the last minute to order whatever he’d ordered me, so it was supposed to be delivered via FedEx on Friday – when he SHOULD have been coming home to escape The Frightening Blizzard.

And so, as the weather worsened and EVERYONE ELSE IN THE WORLD was safe at home, he was still at the office, trying desperately to track down his FedEx guy.

I had told him multiple times that I would rather him be safely home than to have my Valentine’s gift on time, and might have even sent him a text telling him that my gift was losing brownie points by the second, but it was to no avail.

Finally, at 3pm, he texted me and told me that he gave up and was on his way home.

However. I knew that there was no way he’d given up – he would have sounded much angrier at himself (even in text), so I was confident that it was a fake-out.

Sure enough, that night, he “surprised” me and told me that he had, indeed, gotten my gift. I opened it, and all of a sudden everything became clearer: 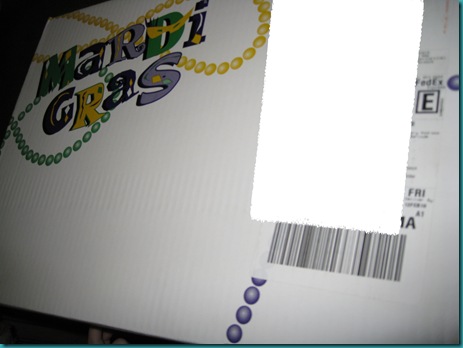 He had ordered me a REAL King Cake. From New Orleans. Freshly baked the day before. From a King Cake Expert, located with the help of our Lousianian friend Nikki.

He’d put in his order weeks beforehand, apparently completely unaware that we would have a snowstorm of gigantic (2 inch) proportions, and so he HAD to wait on my freshly baked cake, or by Monday it would not have been, well, freshly baked.

A lot of you also asked about what a King Cake was, so here was how another genuine Lousianian, Debra, explained it in the comments of my last post mentioning them:

The history of the King Cake began in 12th century France where the cake would be baked on the eve of January 6 (Epiphany) to celebrate the visit to the Christ Child by the three Kings.

It was later brought to South Louisiana by the French settlers and eventually developed into a Mardi Gras celebration. However, what would happen is if you found the baby in the cake, it would be your turn to supply the cake the next week at the next party. This would go on each week throughout the Mardi Gras season until Fat Tuesday (which precedes Ash Wednesday).

There is ton of information about the symbolism of the colors of the cake, the reason for the baby vs. the silver or gold bean, braided or unbraided, etc. As with any tradition, things evolve and change over time.

The first one I ever tried was “real” (from New Orleans), so ever since that day, as if under a Turkish Delight Curse of the White Witch from Narnia, I’ve been trying to replicate that amazing experience with locally baked ones, but to NO avail.

But this one – this one was real: 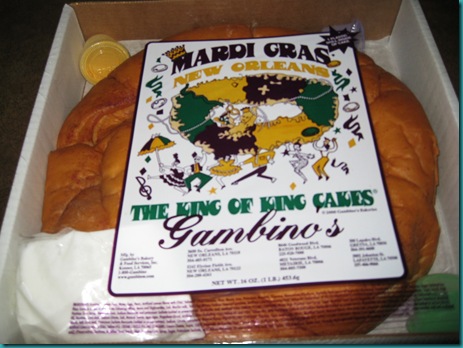 Ali helped me ice it and sprinkle it: 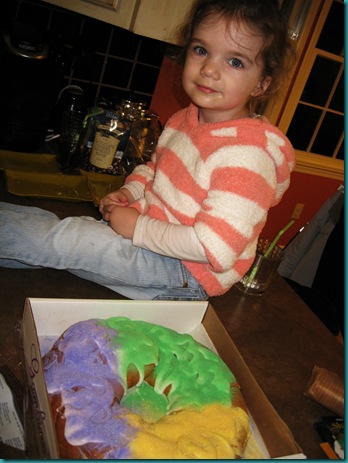 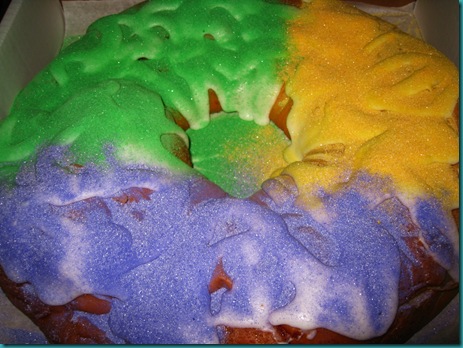 We ate it for dinner, after-dinner dessert, breakfast, mid-morning snack…you get the point. 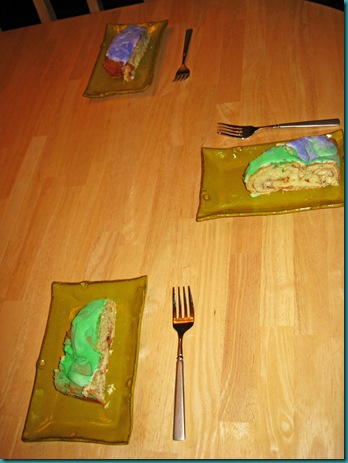 And, fittingly so, I was the lucky baby finder! 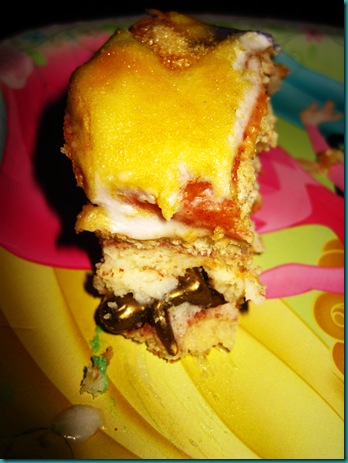 Seriously the best cake ever. Even the baby was more real….

And, if you’re wondering, I got Chris some of the magic cups that we first learned about from Ryan and Christen: 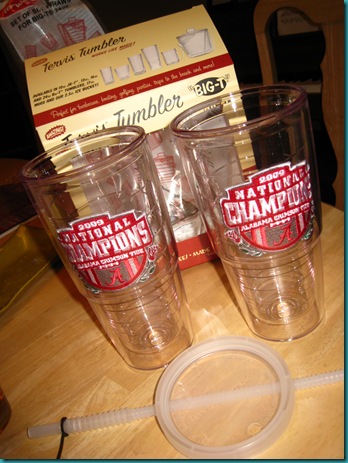 And yes, they are definitely magic.

And Ali. We just got her Valentine’s PEZ. Because we learned at Christmas that PEZ trumps any other gift in the world…except maybe being spared from having to go to Uncle Joe’s Tot Locker. 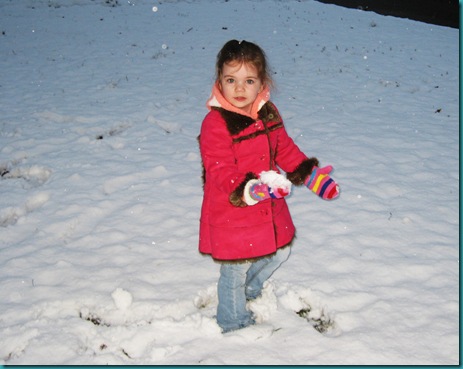