Our Church Youth Group had a Retreat this past weekend, and somehow I got dubbed as responsible enough to be a driver for the Senior Girl’s team of The Amazing Race, which included clues, riddles, assignments, and adventure.

Our clues led us all over town, including Vulcan, our city’s pants-less statue, famous for mooning the whole metro area continuously: 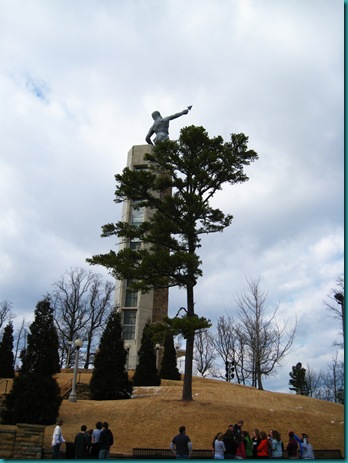 (I’ve never understood why he has a skirt on the front but nothing on the backside…but hey – at least he gives all of us something to laugh at.) 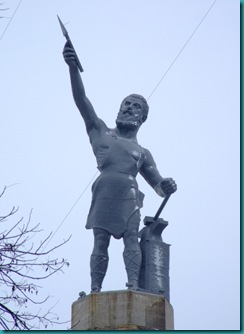 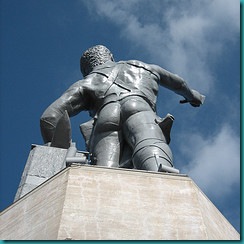 We also went to Serra Honda, whose fault it is that I can’t get the Serra Honda-Man theme song out of my head, 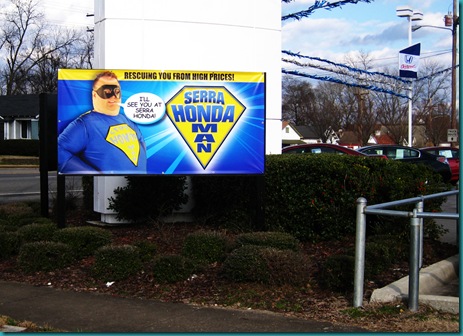 We had to crawl through the fence at Sloss Furnaces and go on a search for hidden Travelocity-esque gnomes, 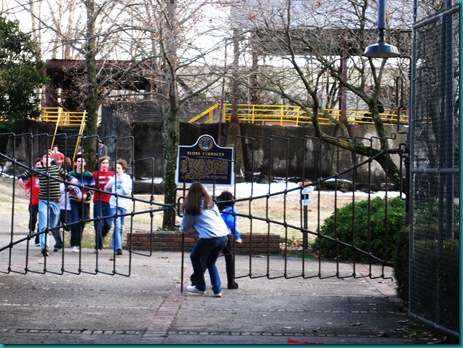 And finally to the highest point in the State of Alabama, which I previously did not know was the cell phone tower in our very own Church Parking Lot: 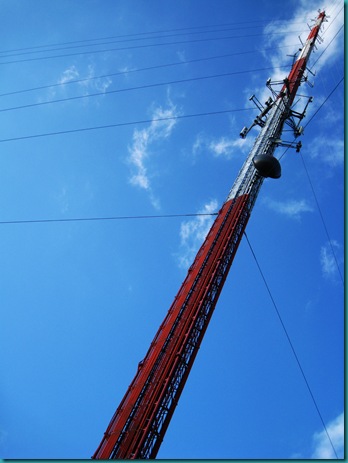 But the most adventurous clue was the very first one.

Our first clue led us to The Riverchase Galleria, Birmingham’s mega-mall, to look for someone dressed up as Waldo.

We got stuck in traffic and I chose NOT to take the dangerous U-Turn that SOME OTHER DRIVERS opted for, so by the time we got there, we were nearly last.

When we got inside, we spotted a team running upstairs, and they yelled out to us that we needed to go to Ruby Tuesday.

We thought it odd that they were helping us, but we trusted them and headed up.

When we arrived, there were a whole bunch of teams, all standing OUTSIDE the mall with a very confused looking Waldo and a VERY angry looking Female(ish) Mall Cop.

We arrived outside, and Pauline Blart Mall Cop started yelling.

“Who are the adults in this group??”

I timidly raised my hand.

“OKAY – I want all the CHILDREN over here and the adults over there, NOW!!!”

(Keep in mind that these “children” were Junior High and High School kids – mostly High School.)

She then let loose all of her Pent-Up-Mall-Cop-And-Can’t-Carry-A-Gun frustration in a eardrum-bursting tirade.

“This is NOT ALLOWED!!! There are a hundred kids running all over this mall, pushing patrons and upsetting people – THIS IS NOT ALLOWED! If you EVER want to have an organized event at OUR MALL, you MUST obtain permission first!!!! We saw the first group running through the parking lot – some INNOCENT person could have HIT those kids with their car and HURT, KILLED, or MAIMED them, and then they would have had to live with that guilt for the REST OF THEIR LIVES. How would you like that??!! We are getting numerous complaints and this is NOT ALLOWED!!!”

She continues on…and on, telling us over and over how grievously we broke the rules of her mall.

Finally, there’s a break in the lecture, and one of the other adults quietly asks, “May we leave, then?”

Of course, since we’re in multiple groups, we all start pointing in different directions.

(Giant Heaving Annoyed Sigh) “You may leave if you leave IMMEDIATELY. BUT – all of the CHILDREN must hold the adult’s hands. And you MAY NOT RUN. OR TALK.”

I quietly get our next clue from Waldo before she notices and confiscates them, and we quickly, yet non-runningly but also not-hand-holdingly, make our way back to my car.

At first, my girls were struck silent by the grave danger that we had been in. Then one of them finally broke the silence to ask, “Don’t you think it was odd that the guy that turned us in looked like Waldo?”

“Um, that WAS Waldo. He was in trouble too.”

“OOOOOOH. That makes SO much more sense!!!”

We got back in the car, and they set off to figuring out their next clue. 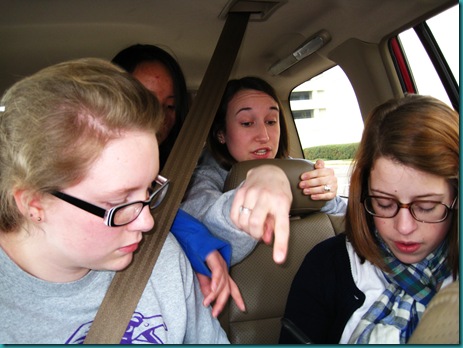 We came in fourth (out of eight or nine teams), but we were happy with that victory, mainly because we were just relieved that Pauline Blart didn’t ban us from the mall FOREVER.

Because no amount of fun and competition is worth that punishment.

19 thoughts on “Amazingly Racing Into Trouble.”