So remember a few weeks ago when it had been below freezing for decades and there was actually ICE where water usually was and I totally believed them when they said it was going to snow and it totally didn’t?

Well, the disappointment was just too great to risk again, so I convinced myself that it would be another snowless Alabama year and moved on to look forward to Spring.

And then, this week, they said it was going to snow.

No WAY was I going to fall for it this time – it had been sunny and almost warm all week, all of the water was finally back to rightfully being water, and they were predicting mid-30’s all day.

But, because life is ironic, this is the view from my computer right now: 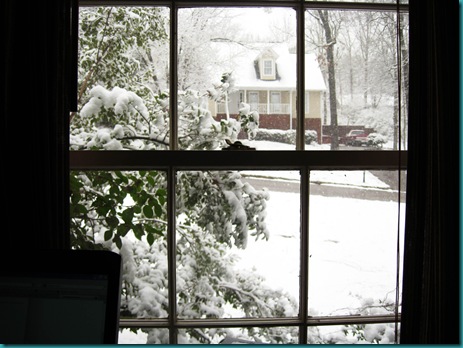 And no, I didn’t borrow that photo from one of my northern bloggy friends.

It has been snowing for five and a half hours STRAIGHT. I didn’t even know that was possible.

When it first started snowing this morning, I tried to convince Ali to go outside with me.

She was totally uninterested.

Finally, after several minutes of wickedly brutal negotiation, she agreed to go out with me on her terms: she got to keep on her current outfit: 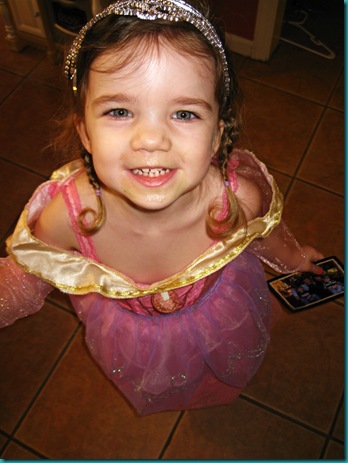 (She also tried to convince me that she needed to take the picture of her current love interest, Ethan, outside with her, but I told her that he would be completely ruined by the blizzardy snowstorm, so she conceded that point.)

And so, I took the Princess, complete with a tutu over her dress and open-toed heels, out in the “snow”: 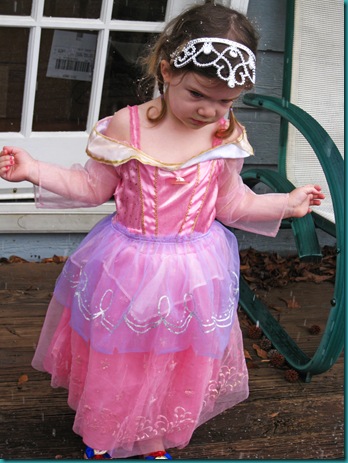 Which lasted all of about a minute and a half, at which point she told me she was done with that and headed back inside. 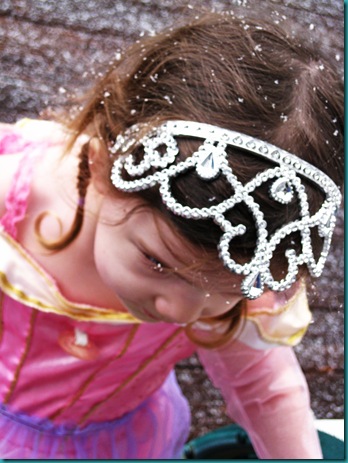 Negotiations resumed. After all – she’s only three – she doesn’t realize how rare this snowy treat will be in her life.

Attempt #2: She got to keep the princess dress on, but I insisted on the concession of wrapping her in a blanket to improve the sustainability of snow trip B. 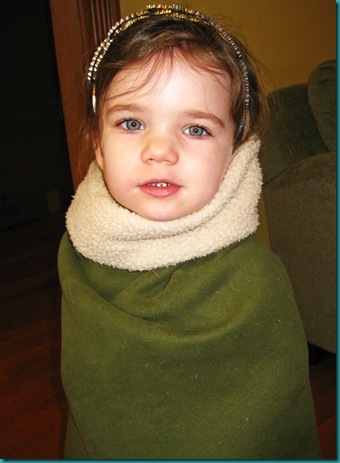 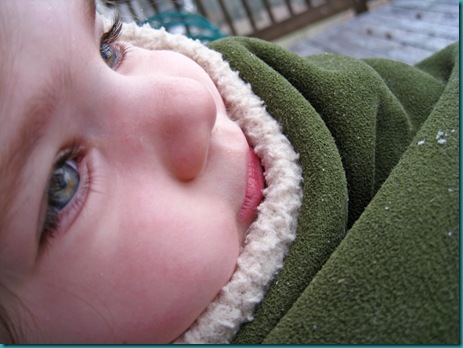 And even wanted to taste it… 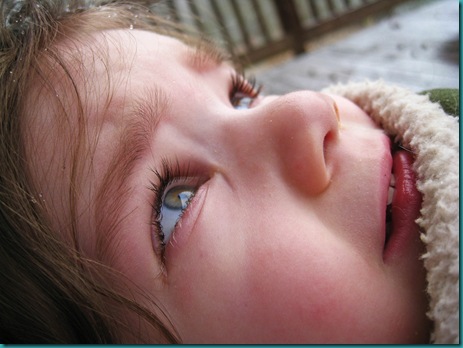 But then called an all stop when she got some in her eye and just knew she’d die from the contamination.

So we took a break for a while to allow a bit of accumulation to occur (yes!!! It actually accumulated!! In Alabama!!!), and I worked on my negotiation tactics.

Take three: she actually allowed me to properly dress her for the occasion: 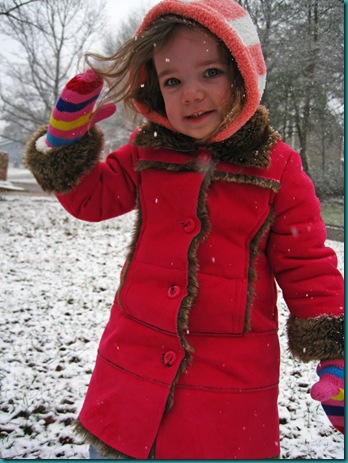 And, shocker of all shockers, when she listened to ME, she actually found the snow enjoyable: 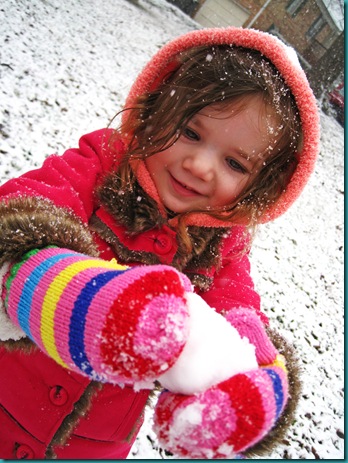 I made her snowballs, and she threw them in the road: 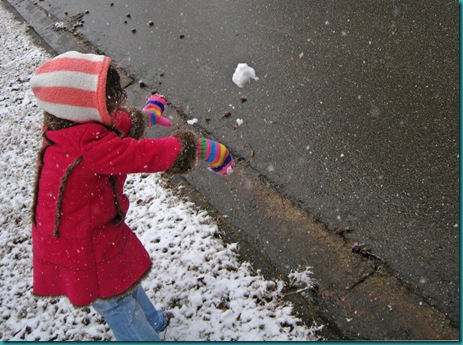 I made her a tiny snowman friend, and she asked for a carrot nose and coal eyes. 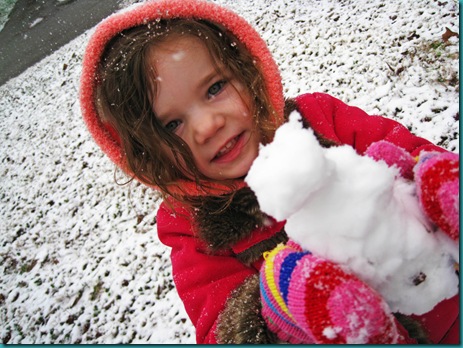 I tried to give him bark eyes, but it wouldn’t stick. “I’m sorry, baby, he didn’t want to keep his eyes on.”

I turn around, then hear a plop.

Ali explains, “He didn’t want to keep his head on either, I guess.” 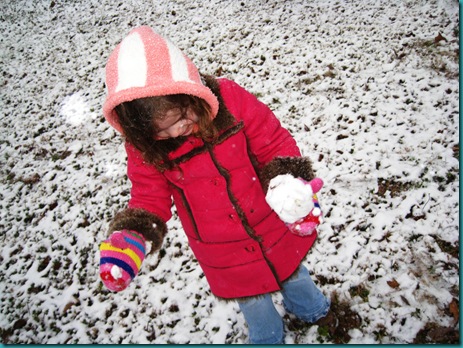 We finally found a suitable surface (the trampoline) to make a proper (albeit still miniature) snowman: 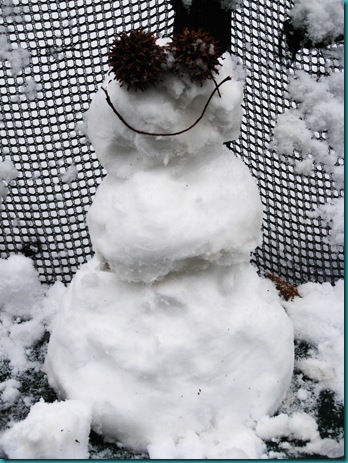 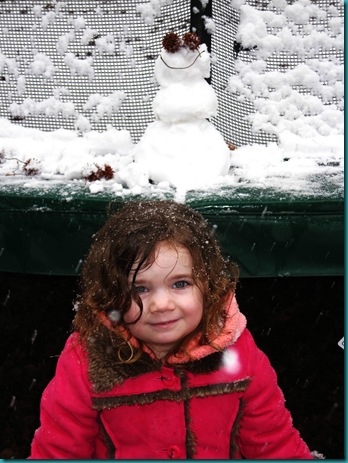 We collected some specimen and came in and made my favorite treat in the whole world, snow cream. 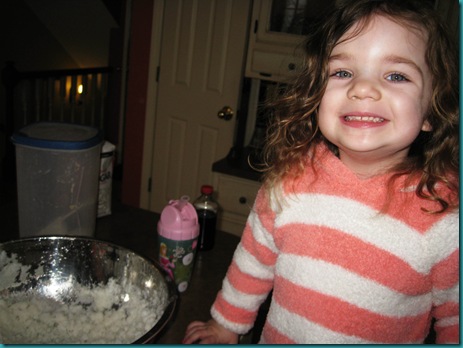 Apparently, the adoration for it is genetic. 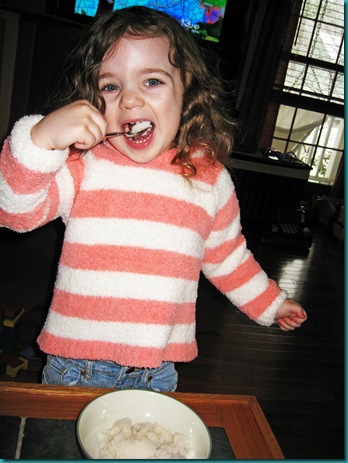 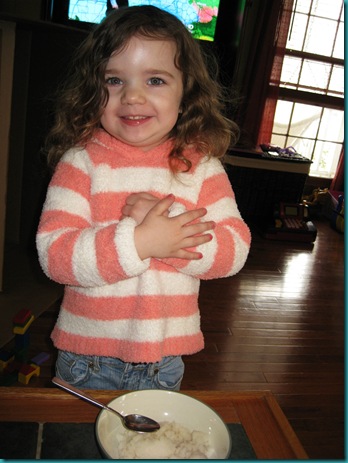 We took one last trip out before naptime, this time with enough snow on the ground for our feet to actually SINK INTO IT. 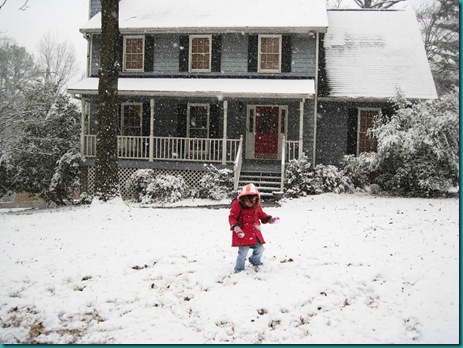 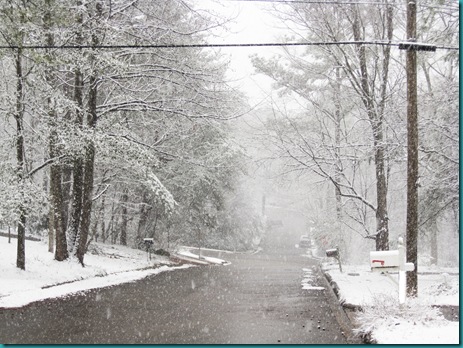 Obviously, we are having a blizzard of cataclysmic proportions.

Northeast, eat your heart out. We have, like, two INCHES! 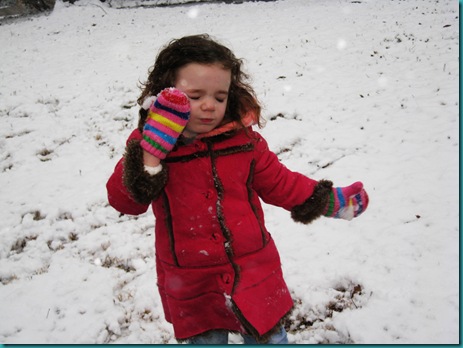 We managed to pull ourselves out of snowdrift after snowdrift fight our way back inside to safety. 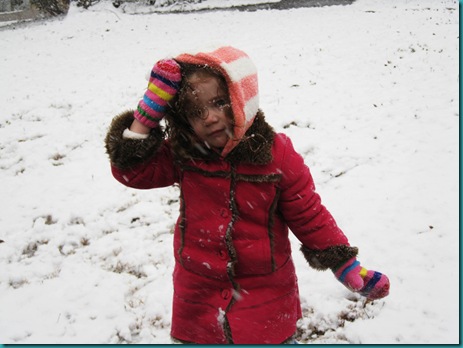 20 thoughts on “Was Too Skeptical To Buy Milk and Bread. Going to Die.”