The LSU / Alabama game is always a study in human nature worth experiencing. ESPECIALLY before the game (and, I daresay after the game may even be more so, but we’ve never stayed to risk it.)

LSU fans are hugely supportive and tailgate-esque, nearly as much so as Alabama. So when the two come together, Tuscaloosa becomes a whole seriously crazy place.

Due to the massive and quite passionate crowds, everyone makes sure to protect their territories a little more than usual. For instance, these signs were posted all over the grounds of the Religious Student Center at which we park: 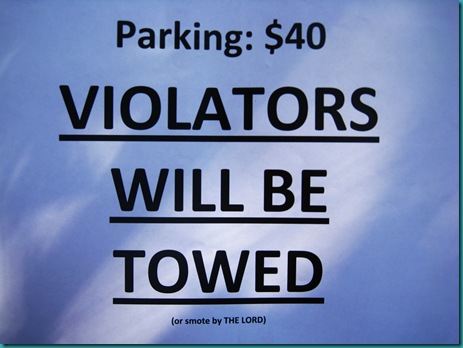 In case you can’t read that last sentence… 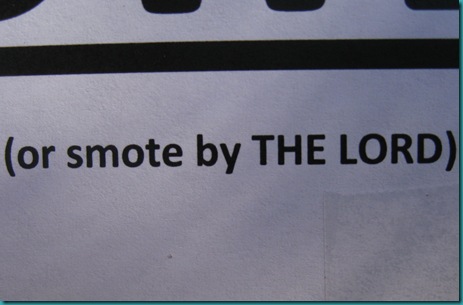 I never knew that God was so passionate about illegal tailgating.

At any rate, the party atmosphere is quite high when LSU comes to town, including sidewalks being completely impassable due to line-dancing crowds: 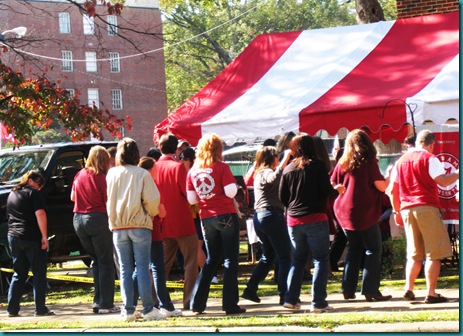 And, although there are always the troublemaking outliers, their shared obsession with tailgating seem to bring the two teams together, rather than create disturbances: 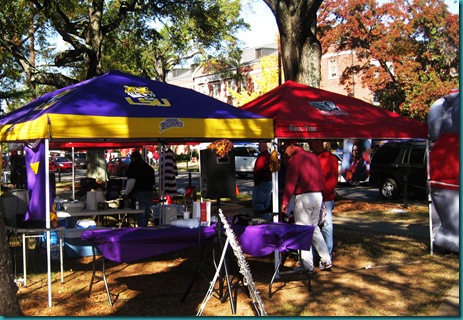 Now, I have a few friends from Louisiana, and they have told me many times that Louisianians are a very unique breed. And with that comes all sorts of fun tailgate toys that we don’t have. Like, for instance, whole pig roasters: 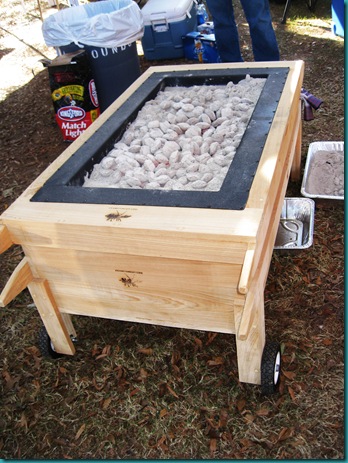 (In fact, I was told there were actually TWO whole pigs underneath all of those smoldering coals.)

And, since LSU is SUCH a heavy tailgating team, the Alabama crazies step it up a notch to ensure their dominance. 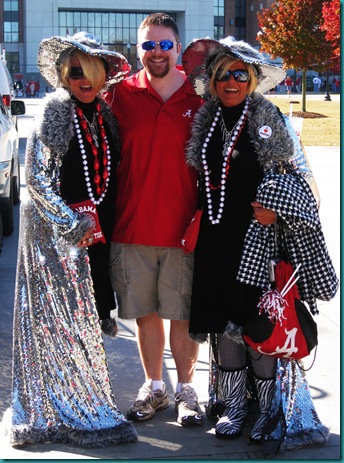 But their Gentleman, uh, “Companion”, wasn’t too happy about sharing them: 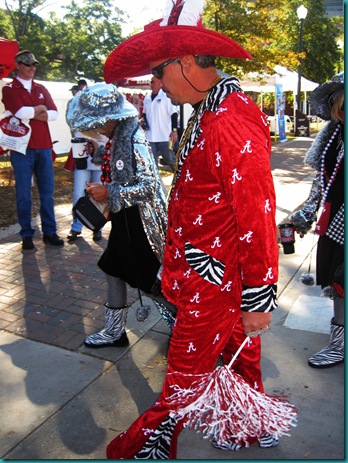 I guarantee you that somewhere in Alabama, there’s been a wedding occur in those outfits.

There were superheroes present for both teams: 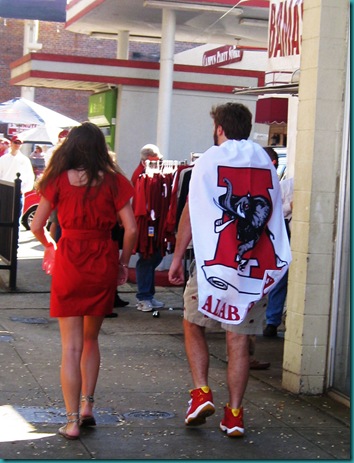 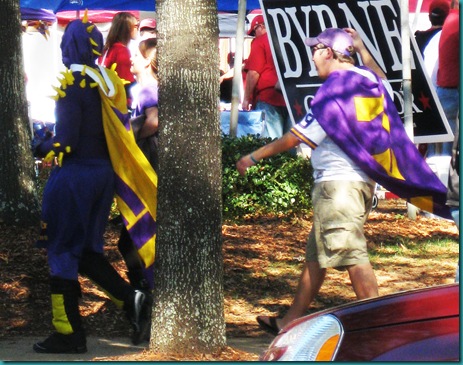 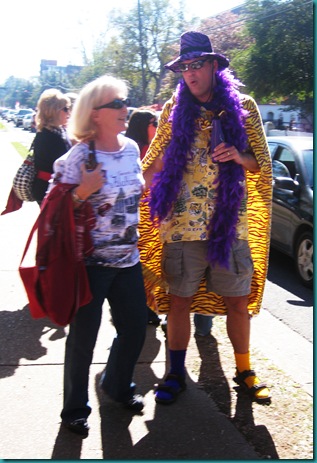 And, as usual, some interesting fashion statements: 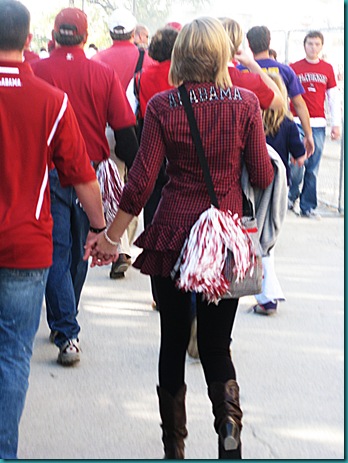 (I love how she took this fall’s hot plaid fashion trend and stepped it up a notch with the help of her bedazzler to come up with a feyancee Alabama shirt.)

And, LSU fans have some pants that rival the complete tackiness of some of Alabama’s menswear: 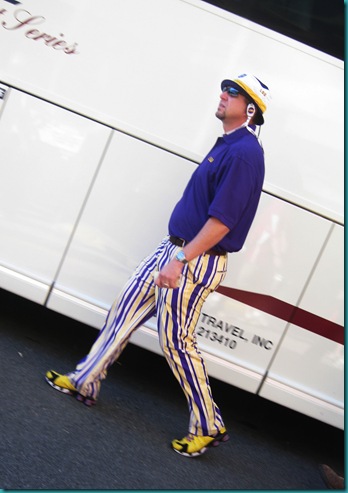 But, if you just don’t know what to wear, a Mario Jumpsuit works quite well: 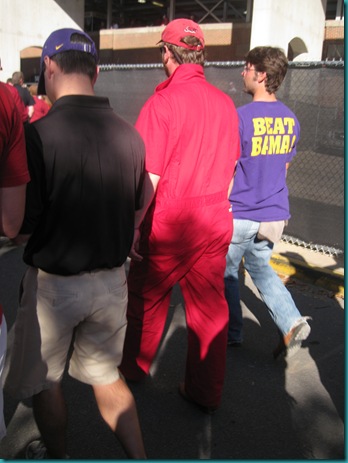 (For the record, he’s wearing an Arkansas Razorbacks hat. I think he may have gotten lost…)

But no matter how hard you work on your team-to-outfit coordination, it may not stop you from having a serious wardrobe malfunction: 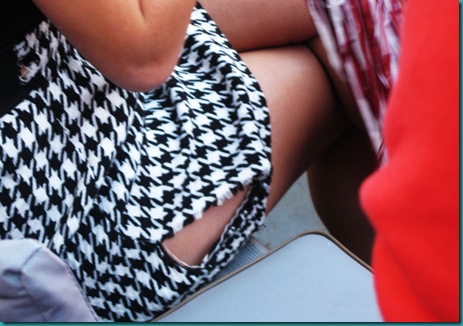 Poor thing. But she never seemed to notice

I had asked Chris before the game if he was going to be moody and angry, seeing as how I knew it would be a close game. He defended himself and said that he was never moody and angry! Maybe stressed, but NOT moody and angry.

Then we arrived at the stadium, and his nerves hit him.

Chris: “Can I pre-apologize for being moody and angry?”

Me: “Nope! That just proves that your moodiness and angriness was pre-meditated, which makes it less acceptable!”

Chris: “No, I am not premeditating being moody and angry, I just think I might be susceptible to the temptation to be moody or angry at some point during this game.”

Me: “Still no – being aware of that just means that you have the knowledge to make the decision to work extra hard not to be moody and angry.”

I must say, he did fairly well, especially considering the stress level of the game.

Not to say that he DIDN’T have to apologize, but still.

Other people found different ways of dealing with their stress in the stadium.

For instance, there was a couple two rows in front of us – let’s call them Gropey McGropey Pants and Gropey McGropey Dress – who found that they felt MUCH better if they stood up (especially at times when everyone behind them was sitting) and thoroughly groped each other’s backsides. Repeatedly. And for tortuously extended time periods.

Imagine about ten rows of muffled laughter behind them.

And then there are always those fans who feel much better if they invade the personal space of complete strangers. I had one guy clap me on the back HARD five times in a row – and I had never seen him before in my life.

And then – another girl ran up from nowhere and slapped me three times on the butt with her shaker.

Now that I think about it, I’m wondering if I had some sort of instructional sign on my back…

At any rate, we won, Chris left happy, and I was a good wife and showed how much I love and respect my husband by dressing Ali in this for Church yesterday morning: 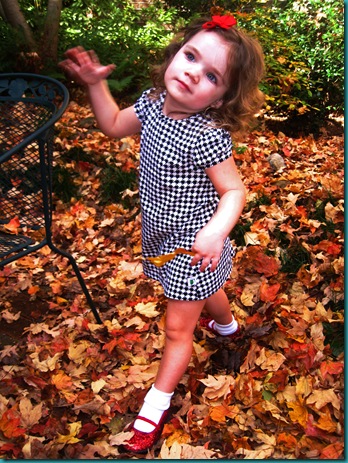 Of course, she was horribly embarrassed when she got to church and realized that half the congregation was wearing pretty much the same outfit.

Not that we take our football too seriously or anything down here.

18 thoughts on “When Tailgations Collide.”