Remember last weekend when I mentioned my face’s graceful run-in with my camera on the camping trip?

This particular camping trip is a year-long anticipated destination for the dozens of kids that attend. There are games and scavenger hunts and treasures and friends and everything a kid could want. It’s Heaven, I tell you.

In Ali’s treasure bag, there was this Parachuting Chicken, for which I have developed a sharp dislike: 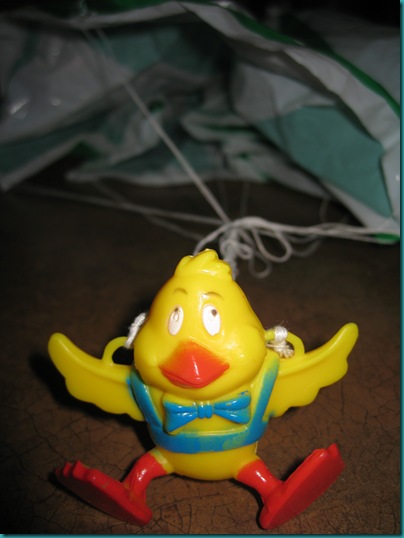 Anyway, Ali received her treasure bag, and we were going through her Utopia of Goodies together, all excitedly. She got to the Chicken and knew exactly what it was.

“Throw it up in the air, Mommy!! Throw it REEEEEEEAL high, Mommy!!”

So we walked out into the field, I pulled my arm back with all of the eight-years-of-childhood-softball-pitching power that I could muster, and I threw the chicken as high as I could.

Except that the chicken didn’t go very high at all.

Because on it’s fast and powerful upward ascent, my arm met with my camera, which happened to be in my jacket pocket.

And from there, my arm lifted my camera up into my lip, face, and nose, with all of the eight-years-of-childhood-softball-pitching power that it could muster.

It was one of those facial impacts that immediately brings tears to your eyes, not because you’re in pain (which you are), but because it just knocked every drop of liquid out of your head with the impact.

We walked away for a minute as I tried to silently compose myself. My lip felt swollen and busted, and everything hurt, but there seemed to be no spurting of blood, so I assumed that I didn’t permanently damage anything.

My lip swelling went down as my nose swelling came up. My nose was very tender and sore for the next two days.

Then, as the tenderness went away, my nose began a new trick: every time any pressure was put on it, it gave me an immediate and piercing headache.

After two days of headaches, I started feeling a ton of pressure along with those headaches.

So, I made my second trip to the doctor in a week, only to find out that…. 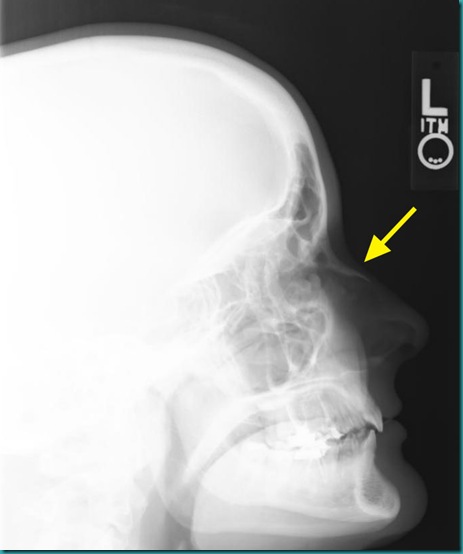 My nose, she is broken.

(And no, my teeth don’t look like fangs in real life.)

“There’s nothing we can do about it, but the pain should go away in four to six weeks if it heals correctly. Just don’t touch it until then. And come back in six weeks so that we can make sure it healed right.”

Have you ever tried keeping anything from touching your nose? How about for six weeks?

I never knew that my nose touched so many things a day until it was told not to.

So, the moral of this story is:

If I weren’t a blogger, I wouldn’t carry my camera with me at all times.

And if I hadn’t had my camera in my pocket, that stupid chicken would have flown high in the sky, and my nose would not currently feel like it was filled with cement and daggers.

But I do it all for you.

Blogging: it has serious health risks.

As do stupid parachuting chickens.

21 thoughts on “Consult Your Physician Before Starting Any Blogging Routine.”