As you could probably guess, I am in a blinding frenzy today getting ready to fly to Chicago for Blogher ’09.

(Except right now, I’m somewhere in between queasy nervousness and nauseous overwhelmedness.)

Obviously, this trip is WAY out of my normal routine. But totally thrilling!

The reason I decided to go at the very last minute was because I was offered a sponsorship from my good friends at 5 Minutes for Mom. Susan has just launched a brand new site – Say it Face to Face, which I will be promoting at Blogher.

She just unveiled Say it Face to Face yesterday at 5 Minutes for Mom, along with a cash prize contest to kick it off!! 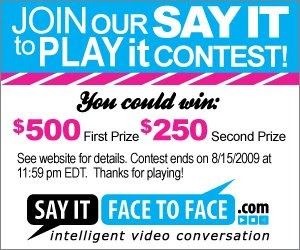 Say it Face to Face is a brand new idea in the social media realm, and is completely different than anything else out there. The basic concept is to create conversations through video – somewhat like vlogging, except more conversational.

You upload (via YouTube) a video of yourself asking a question or starting a conversation topic, and then other people will answer it, also via video.

The reason that Susan really wanted to create this site is that in the social media world, our relationships grow in leaps and bounds when we meet in person – it really takes a friendship from “this is my bloggy friend” to “this is my friend in real life”. And so, by video conversing, it helps create friendships and take existing ones to new levels.

Other benefits of Say it Face to Face are:

In the meantime, I am off to have a panic attack Blogher! I will be meeting a ton of new people, learning all sorts of things, promoting my blog and Say it Face to Face, and hopefully not completely shutting down from being overwhelmed by all that will be going on!

Wish me luck, and I’ll be blogging from Chicago next time you hear from me!