To mitigate my Mommy Guilt of LEAVING MY CHILD FOR THREE DAYS, Ali and I cuddled and talked a lot yesterday morning. On the way to my Mom and Dad’s house (which is where she will stay until Chris gets off of work tonight), we were discussing all of the things we’ve done this week that she should tell Gramamma about.

Then she excitedly told me, “And I can tell Gramamma about pooping!!”

Conversationally, I asked, “You’re going to tell Gramamma about pooping?”

And with a teasing tone, she answered, “Noooooooo!”

I think she’s been secretly reading my blog and picking up on my potty humor.

After I got home from delivering my child and finished packing, I decided that my jeans (which I had run around in all morning and was planning on wearing during travel) needed a wash and dry to get back to their “natural” shape.

However, in doing so, I forgot that I had my boarding pass already in my pocket.

Halfway through the wash cycle, it hit me.

In a panic, I ran to the washer and opened it,. only to see my jeans now COMPLETELY covered in itty bitty bits of paper.

If I’m WEARING my boarding pass, will they let me board?

It’s my Blogher fashion statement: the boarding-pass-washed look on Jeans.

So, after figuring out how to reprint my boarding pass, I was a good girl and got to the airport 90 minutes early, and then waited at least 14 hours – I’m pretty sure there’s a time warp at the airport that stretches every minute into an hour. Plus, my flight was delayed half an hour, which game the the opportunity to peruse the rest of the waiting public.

Almost everyone else was obviously on business trips: ignoring every other human on earth, memorizing PowerPoint slides, reading business reports, etc. . .

But I think there might have been some other people besides me going to conferences.

Like this lady – she was OBVIOUSLY going to a hair styling convention: 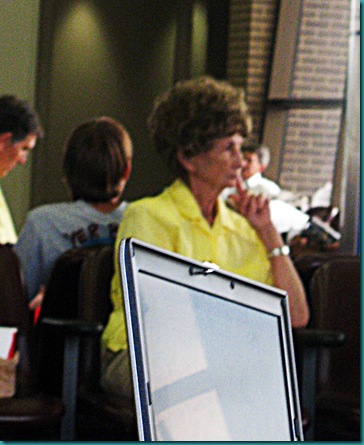 I seriously wonder how people make their hair stand up that tall.

So we finally got to Chicago, and I managed to get my luggage and get on the RIGHT shuttle (after one failed attempt) that would deliver me to downtown.

The first girl to be delivered on our shuttle ride was quite unlucky: She needed to get to a building past the soccer stadium, and all the roads were closed for “you know, the big socca game!!!”. So, our driver dumped her out at the roadblocks. And she walked.

He also informed us that President Obama was in town (presumably to speak at Blogher, obviously), and so we might find more roadblocks.

Luckily, we made it, and even arrived in time to see the unbelievably talented Chris Mann perform. 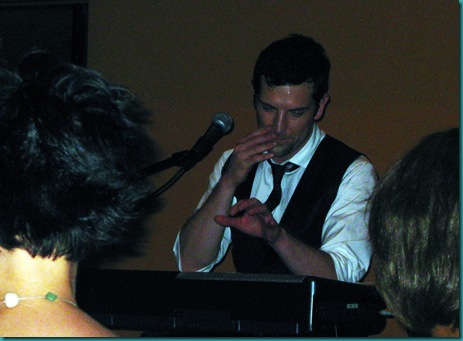 Who, by the way, gave me two signed copies of his as-of-yet un-released CD – one for me, and one for his biggest fan, Trina.

(If you haven’t heard his version of Kanye West’s Heartless, you MUST watch the below video – it is breathtaking!)

But the only SLIGHT problem with his performance, however, was that it was more like his lips were moving, but no sound was coming out.

But I assure you, it wasn’t his fault.

Imagine a room sardine-filled of hundreds of women, all talking louder and louder to talk over each other.

It was truly cacophonous.

And I recognized NO ONE.

I finally found a couple familiar faces, and was SO relieved.

I got some GREAT hangout time with Erica of 5 Minutes for Mom (who, by the way, is hilariously entertaining!), 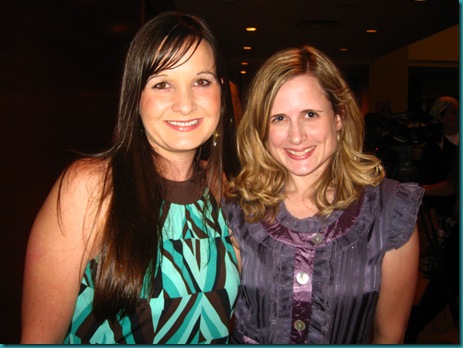 And, of course, the famed (and gorgeous!!) 5 Minutes for Mom twins, Susan and Janice: 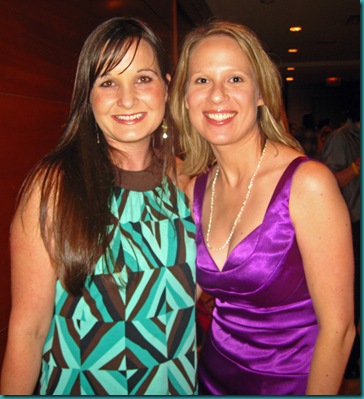 Well, okay – that’s Susan and NOT Janice. At least one of them had to be running around in a blinding frenzy interviewing people and taking live video.

At any rate, once I got past my indimidated overwhelmed non-social-butterfly self, I really enjoyed the insanity!

I slept from 1:30 to 6:00 and am currently running on adrenaline, which will need to be replaced with Starbucks VERY soon. So, I’m off in search of caffeine.

9 thoughts on “In Which I Recognized Four People”